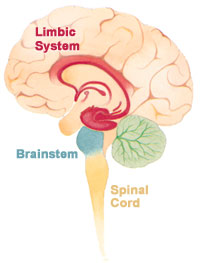 Caption = The limbic system within the .
Width = 200px


Caption2 =
IsPartOf =
Components =
Artery =
Vein =
BrainInfoType = ancil
BrainInfoNumber = 247
MeshName =
MeshNumber =
DorlandsPre = s_33
DorlandsSuf = 12787580
The limbic system, or Paleomammalian brain is a term for a set of brain structures including the and and anterior thalamic nuclei and a limbic cortex that support a variety of functions including , and . The structures of the brain described by the limbic system are closely associated with the olfactory structures.

Essentially the limbic system is the set of brain structures that form the border of the cortex. In an abstract topological sense, each cortical hemisphere can be thought of as a sphere of gray matter, with a hole punched through it in the area where nerve fibers connect it to the subcortical structures of the basal forebrain. The hole is lined with a ring of cortical and noncortical areas that combine to make up the limbic system. The cortical components generally have fewer layers than the classical 6-layered , and are often classified as or .

The limbic system includes many structures in the and of the . The term has been used within psychiatry and neurology, although its exact role and definition has been revised considerably since the term was introduced.

In addition, these structures are sometimes also considered to be part of the limbic system:
* :

The limbic system operates by influencing the and the . It is highly interconnected with the , the brain's , which plays a role in and the "high" derived from certain recreational drugs. These responses are heavily modulated by rgic projections from the limbic system. In 1954, Olds and Milner found that s with metal s implanted into their nucleus accumbens repeatedly pressed a lever activating this region, and did so in preference to eating and drinking, eventually dying of exhaustion. [Olds, J., Milner, P. 1954. Positive reinforcement produced by electrical stimulation of septal area and other regions of rat brain. "J.Comp. Physiolo. Psycholo." 47, 419–427 ]

The limbic system is also tightly connected to the . Some scientists contend that this connection is related to the pleasure obtained from solving problems. To cure severe emotional disorders, this connection was sometimes surgically severed, a procedure of , called a prefrontal lobotomy (this is actually a misnomer). Patients who underwent this procedure often became passive and lacked all motivation.

The limbic system is embryologically older than other parts of the brain. It developed to manage 'fight' or 'flight' chemicals and is an evolutionary necessity for s as well as s.

Recent studies of the limbic system of have challenged some long-held tenets of forebrain evolution. The common ancestors of reptiles and had a well-developed limbic system in which the basic subdivisions and connections of the amygdalar nuclei were established. [cite journal |author=Bruce LL, Neary TJ |title=The limbic system of tetrapods: a comparative analysis of cortical and amygdalar populations |journal=Brain Behav. Evol. |volume=46 |issue=4–5 |pages=224–34 |year=1995 |pmid=8564465 |doi=10.1159/000113276]

The French physician first called this part of the brain "le grand lobe limbique" in 1878, [Broca, P. Anatomie comparée des circonvolutions cérébrales: le grand lobe limbique. "Rev. Anthropol." 1878;1:385–498.] but most of its putative role in emotion was developed only in 1937 when the American physician described his anatomical model of emotion, the . [Papez JW. A proposed mechanism of emotion. 1937. "J Neuropsychiatry Clin Neurosci." 1995;7(1):103-12. PMID 7711480] expanded these ideas to include additional structures in a more dispersed "limbic system," more on the lines of the system described above. [Cite journal
author = P. D. Maclean
title = Some psychiatric implications of physiological studies on frontotemporal portion of limbic system (visceral brain)
journal =
year = 1952
volume = 4
issue = 4
pages = 407&ndash;418
pmid = 12998590
doi = 10.1016/0013-4694(52)90073-4] The term was formerly introduced by MacLean in 1952. The concept of the limbic system has since been further expanded and developed by Nauta, Heimer and others.

Still, there remains much controversy over the use of the term. When it was first coined, it was posited as the emotional center of the brain, with cognition being the business of the by contrast. However, this almost immediately ran into trouble when damage to the , a primary limbic structure, was shown to result in severe cognitive deficits. And since its inception, the delineating boundaries of the limbic system have been changed again and again by the community. More recently, attempts have been made to salvage the concept through more precise definition, but there are still no generally accepted criteria for defining its parts. Being a concept grounded more in tradition than in facts, many scientists have suggested that the concept should be abandoned. [Ledoux, J., (2003). Synaptic Self. New York: Penguin Books.]