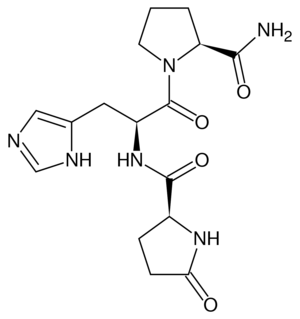 TRH is produced by the in medial neurons of the . [cite journal |author=Taylor T, Wondisford F, Blaine T, Weintraub B |title=The paraventricular nucleus of the hypothalamus has a major role in thyroid hormone feedback regulation of thyrotropin synthesis and secretion |journal=Endocrinology |volume=126 |issue=1 |pages=317–24 |year=1990 |pmid=2104587] Initially, it is synthesized as a 242 amino acid precursor polypeptide that contains 6 copies of the sequence -Glu-His-Pro-Gly-, flanked by di-basic peptides that are later processed through proteolysis to give the mature TRH molecule.

It travels across the to the anterior pituitary gland via the where it stimulates the release of from cells called s. [ [http://www.vivo.colostate.edu/hbooks/pathphys/endocrine/hypopit/tsh.html Thyroid-Stimulating Hormone ] ]

In addition to the brain, TRH can also be detected in other areas of the body including the and pancreatic islets.

It is used in pharmacology (brand name Relefact TRH) to test the response of the .

Medical preparations of TRH are used in diagnostic tests of disorders and in .

A TRH test may be indicated if secondary is suspected. Some patients may have low levels of circulating and secondary hypothyroidism as a result of damage to the hypothalamic or pituitary control mechanisms that regulate thyroid function. The hypothalamus makes a small hormone called TRH that directs the synthesis and secretion of from the pituitary gland. If these normal regulatory mechanisms are interrupted, the pituitary may not be able to produce appropriate levels of TSH and levels of thyroid hormones may decline, although the TSH remains appropriately normal. The TRH test involves administration of a small amount of TRH intravenously, following which levels of TSH will be measured at several subsequent time points using samples of blood taken from a peripheral vein. Patients with normal function of the hypothalamic-pituitary axis (HPA) respond by increasing the levels of TSH following TRH injection. Patients with compromised HPA function may exhibit a delayed, blunted, or absent response to TRH administration. TRH may cause nausea, vomiting and some patients experience an urge to urinate. Rarely, TRH may cause blood vessel constriction leading to hemorrhage in patients with pre-existing pituitary tumors. Accordingly, patients should be advised about the risks, albeit rare, of TRH testing. [http://www.mythyroid.com/TRHtest]