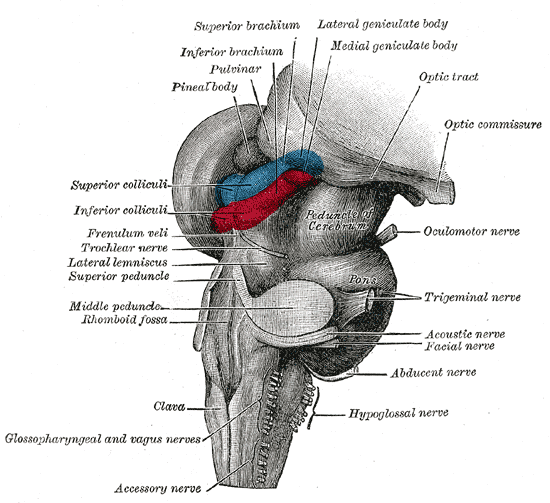 Caption = Hind- and mid-brains; postero-lateral view.
IsPartOf =
Components = Medulla, ,
Artery =
Vein =
BrainInfoType = ancil
BrainInfoNumber = 218
MeshName = Brain+Stem
MeshNumber = A08.186.211.132
DorlandsPre = b_21
DorlandsSuf = 12195821
The brain stem (or brainstem) is the lower part of the , adjoining and structurally continuous with the . The brain stem provides the main motor and sensory innervation to the face and neck via the . The neurons of the motor and sensory systems for the rest of the body also pass through brain stem. This includes the (motor), the (fine touch, vibration sensation and ) and the (pain, temperature, itch and crude touch). The brain stem also plays an important role in the regulation of cardiac and respiratory function. It also regulates the central nervous system, and is pivotal in maintaining consciousness and regulating the . Some taxonomies describe the brain stem as the medulla and mesencephalon, whereas others include regions. Fact|date=August 2008

The most medial part of the medulla is the anterior median fissure. Moving laterally on each side are the pyramids. The pyramids contain the fibers of the tract (also called the pyramidal tract), or the upper motor neuronal axons as they head inferiorly to synapse on lower motor neuronal cell bodies within the of the spinal cord.
The anterolateral sulcus is lateral to the pyramids. Emerging from the anterolateral sulci are the (CN XII) rootlets. Lateral to these rootlets and the anterolateral sulci are the olives. The olives are swellings in the medulla containing underlying inferior olivary nuclei (containing various nuclei and afferent fibers). Lateral (and dorsal) to the olives are the rootlets for IX and X ( and , respectively). The pyramids end at the , noted most obviously by the large . Between the basal pons, cranial nerve 6, 7 and 8 emerge (medial to lateral). These cranial nerves are the , and the , respectively. At the level of the midpons, the large , CN V, emerges. At the rostral pons, the emerges at the midline. Laterally, the has emerged after emerging out of the dorsal rostral pons and wrapping around to the anterior.

The most medial part of the medulla is the posterior median fissure. Moving laterally on each side is the , and lateral to that is the . Superior to each of these, and directly inferior to the , are the gracile tubercles and cuteanus tubercles, respectively. Underlying these are their respective nuclei. The obex marks the end of the 4th ventricle and the beginning of the . The posterior intermediate sulci separates the fasciculi gracilis from the fasciculi cuneatus. Lateral to the fasciculi cuneatus is the .
Superior to the obex is the floor of the 4th ventricle. In the floor of the 4th ventricle, various nuclei can be visualized by the small bumps that they make in the overlying tissue. In the midline and directly superior to the obex is the and superior to that it the . Underlying each of these are motor nuclei for the respective cranial nerves. Superior to these trigones are fibers running laterally in both directions. These fibers are known collectively as the striae medullares. Continuing in a direction, the large bumps are called the facial colliculi. Each , contrary to their names, do not contain the facial nerve nuclei. Instead, they have facial nerve axons traversing superficial to underlying abducens (CN VI) nuclei. Lateral to all these bumps previously discussed is an indented line, or that runs rostrally, and is known as the . This separates the medial motor neurons from the lateral sensory neurons. Lateral to the sulcus limitans is the area collectively known as the , which is involved in special sensation. Moving rostrally, the inferior, middle, and superior cerebellar peduncles are found connecting the midbrain to the cerebellum. Directly rostral to the superior cerebellar peduncle, there is the superior medullary velum and then the two trochlear nerves. This marks the end of the pons as the is directly rostral and marks the caudal midbrain.

Spinal Cord to Medulla Transitional Landmark: From a ventral view, there can be seen a of fibers between the two . This decussation marks the transition from medulla to spinal cord. Superior to the decussation is the medulla and inferior to it is the spinal cord.

The is divided into three parts. The first is the , which is "roof" in . The tectum includes the superior and inferior colliculi and is the dorsal covering of the cerebral aqueduct. The , involved in the special sense of hearing sends its inferior brachium to the of the . Superior to the inferior colliculus, the marks the rostral midbrain. It is involved in the special sense of vision and sends its superior brachium to the of the diencephalon. The second part is the and is ventral to the cerebral aqueduct. Several nuclei, tracts and the reticular formation is contained here. Last, the ventral side is comprised of paired . These transmit axons of upper motor neurons.

: This is a motor nucleus that sends a descending tract to the lower motor neurons.

tract: Directly anterior to the floor of the 4th ventricle, this is a pathway by which many tracts project up to the cortex and down to the spinal cord.

There are three main functions of the brain stem. The first is its role in conduct functions. That is, all information related from the body to the cerebrum and cerebellum and vice versa, must traverse the brain stem. The ascending pathways coming from the body to the brain are the sensory pathways, and include the for pain and temperature sensation and the dorsal column, fasciculus gracilis, and cuneatus for touch, , and pressure sensation (both of the body). (The facial sensations have similar pathways, and will travel in the spinothalamic tract and the also). Descending tracts are upper motor neurons destined to synapse on lower motor neurons in the and of the spinal cord. In addition, there are upper motor neurons that originate in the brain stem's vestibular, red, tactile, and reticular nuclei, which also descend and synapse in the spinal cord. Second, the cranial nerves 3-12 emerge from the brain stem. Third, the brain stem has integrative functions (it is involved in cardiovascular system control, respiratory control, pain sensitivity control, alertness, and consciousness). Thus, brain stem damage is a very serious and often life-threatening problem.

Diseases of the brain stem can result to abnormalities in the function of cranial nerves which may lead to visual disturbances, pupil abnormalities, changes in sensation, muscle weakness, hearing problems, vertigo, swallowing and speech difficulty, voice change, and co-ordination problems. Localizing neurological lesions in the brain stem may be very precise, although it relies on a clear understanding on the functions of brain stem anatomical structures and how to test them.