Ovulation is the process in a female's menstrual cycle by which a mature ovarian follicle ruptures and discharges an ovum (also known as an oocyte, female gamete, or casually, an egg). Ovulation also occurs in the estrous cycle of other female mammals, which differs in many fundamental ways from the menstrual cycle. The time immediately surrounding ovulation is referred to as the ovulatory phase or the periovulatory period.

The process of ovulation is controlled by the hypothalamus of the brain and through the release of hormones secreted in the anterior lobe of the pituitary gland, luteinizing hormone (LH) and follicle-stimulating hormone (FSH). In the pre-ovulatory phase of the menstrual cycle, the ovarian follicle will undergo a series of transformations called cumulus expansion, which is stimulated by FSH. After this is done, a hole called the stigma will form in the follicle, and the ovum will leave the follicle through this hole. Ovulation is triggered by a spike in the amount of FSH and LH released from the pituitary gland. During the luteal (post-ovulatory) phase, the ovum will travel through the fallopian tubes toward the uterus. If fertilized by a sperm, it may perform implantation there 6–12 days later.

Ovulation occurs when a mature egg is released from the ovary into the abdominal cavity.[1] Afterwards, it will eventually become available to be fertilized. Concomitantly, the lining of the uterus is thickened to be able to receive a fertilized egg. If no conception occurs, the uterine lining as well as blood will be shed in menstruation.

In humans, the few days near ovulation constitute the fertile phase. The time from the beginning of the last menstrual period (LMP) until ovulation is, on average, 14.6[2] days, but with substantial variation both between women and between cycles in any single woman, with an overall 95% prediction interval of 8.2 to 20.5[2] days.

Cycle length alone is not a reliable indicator of the day of ovulation. While in general an earlier ovulation will result in a shorter menstrual cycle, and vice versa, the luteal (post-ovulatory) phase of the menstrual cycle may vary by up to a week between women.[citation needed] 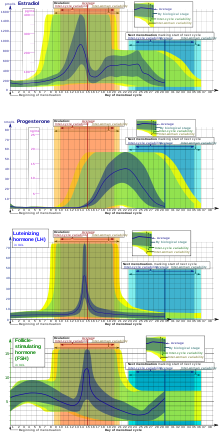 This diagram shows the hormonal changes around the time of ovulation, as well as the inter-cycle and inter-woman variabilities in its timing.[3]

Strictly defined, the ovulatory phase spans the period of hormonal elevation in the menstrual cycle. The process requires a maximum of thirty-six hours to complete, and it is arbitrarily separated into three phases: preovulatory, ovulatory, and postovulatory.

Through a process that takes approximately 375 days, or thirteen menstrual cycles, a large group of undeveloped primordial follicles dormant in the ovary is grown and progressively weaned into one preovulatory follicle. Histologically, the preovulatory follicle (also called a mature Graafian follicle or mature tertiary follicle) contains an oocyte arrested in prophase of meiosis I surrounded by a layer of corona radiata granulosa cells, a layer of mural granulosa cells, a protective basal lamina, and a network of blood-carrying capillary vessels sandwiched between a layer of theca interna and theca externa cells. A large sac of fluid called the antrum predominates in the follicle. A "bridge" of cumulus oophorus granulosa cells (or simply cumulus cells) connects the corona-ovum complex to the mural granulosa cells.

The granulosa cells engage in bidirectional messaging with the cells and the oocyte to facilitate follicular function.

By the action of luteinizing hormone (LH), the preovulatory follicle's theca cells secrete androstenedione that is aromatized by mural granulosa cells into estradiol, a type of estrogen. In contrast to the other phases of the menstrual cycle, estrogen release in late follicular phase has a stimulatory effect on hypothalamus gonadotropin-releasing hormone (GnRH) that in turn stimulates the expression of pituitary LH and follicle stimulating hormone (FSH).

The building concentrations of LH and FSH marks the beginning of the preovulatory phase.

For ovulation to be successful, the ovum must be supported by both the corona radiata and cumulus oophorous granulosa cells. The latter undergo a period of proliferation and mucification known as cumulus expansion. Mucification is the secretion of a hyaluronic acid-rich cocktail that disperses and gathers the cumulus cell network in a sticky matrix around the ovum. This network stays with the ovum after ovulation and has been shown to be necessary for fertilization.

An increase in cumulus cell number causes a concomitant increase in antrum fluid volume that can swell the follicle to over 20 mm in diameter. It forms a pronounced bulge at the surface of the ovary called the blister.

Through a signal transduction cascade initiated by LH, proteolytic enzymes are secreted by the follicle that degrade the follicular tissue at the site of the blister, forming a hole called the stigma. The cumulus-oocyte complex (COC) leaves the ruptured follicle and moves out into the peritoneal cavity through the stigma, where it is caught by the fimbriae at the end of the fallopian tube (also called the oviduct). After entering the oviduct, the ovum-cumulus complex is pushed along by cilia, beginning its journey toward the uterus.

By this time, the oocyte has completed meiosis I, yielding two cells: the larger secondary oocyte that contains all of the cytoplasmic material and a smaller, inactive first polar body. Meiosis II follows at once but will be arrested in the metaphase and will so remain until fertilization. The spindle apparatus of the second meiotic division appears at the time of ovulation. If no fertilization occurs, the oocyte will degenerate approximately twenty-four hours after ovulation.

The mucous membrane of the uterus, termed the functionalis, has reached its maximum size, and so have the endometrial glands, although they are still non-secretory.

The follicle proper has met the end of its lifespan. Without the ovum, the follicle folds inward on itself, transforming into the corpus luteum (pl. corpora lutea), a steroidogenic cluster of cells that produces estrogen and progesterone. These hormones induce the endometrial glands to begin production of the proliferative endometrium and later into secretory endometrium, the site of embryonic growth if fertilization occurs. The action of progesterone increases basal body temperature by one-quarter to one-half degree Celsius (one-half to one degree Fahrenheit). The corpus luteum continues this paracrine action for the remainder of the menstrual cycle, maintaining the endometrium, before disintegrating into scar tissue during menses.

Ovulation is the release of a single, mature egg from a follicle that developed in the ovary. It usually occurs regularly, around day 14 of a 28-day menstrual cycle. Once released, the egg is capable of being fertilized for 12 to 48 hours before it begins to disintegrate. Although there are several days of the month in which a woman is fertile, she is most fertile during the days around ovulation.

The start of ovulation can be detected by various signs. Because the signs are not readily discernible by people other than the woman herself, humans are said to have a concealed ovulation. In many animal species there are distinctive signals indicating the period when the female is fertile. Several explanations have been proposed to explain concealed ovulation in humans.

Women near ovulation experience changes in the cervix, in mucus produced by the cervix, and in their basal body temperature. Furthermore, many women also experience secondary fertility signs including Mittelschmerz (pain associated with ovulation) and a heightened sense of smell.[4]

Many women experience heightened sexual desire in the several days immediately before ovulation.[5] One study concluded that women subtly improve their facial attractiveness during ovulation.[6]

Symptoms related to the onset of ovulation, the moment of ovulation and the body's process of beginning and ending the menstrual cycle vary in intensity with each individual woman but are fundamentally the same. The charting of such symptoms, primarily Basal Body Temperature, Mittelschmerz and cervical position is referred to as the Sympto-Thermal method of Fertility Awareness, which serves to allow auto diagnosis by a woman of her state of ovulation. Once training has been given by a suitable authority, fertility charts can be completed on a cycle by cycle basis to chart ovulation giving the possibility of using the data to predict fertility for both natural contraception and pregnancy planning.

Research spearheaded by Baerwald et al. suggests that the menstrual cycle may not regulate follicular growth as strictly as previously thought. In particular, the majority of women during an average twenty-eight day cycle experience two or three "waves" of follicular development, with only the final wave being ovulatory. The remainder of the waves are anovulatory, characterized by the developed preovulatory follicle falling into atresia (a major anovulatory cycle) or no preovulatory follicle being chosen at all (a minor anovulatory cycle).

The gene Lrh1 appears to be essential in regulating ovulation.[11]

A low dose of human chorionic gonadotropin (HCG) may be injected after completed ovarian stimulation. Ovulation will occur between 24–36 hours after the HCG injection.[12]

Contraception can be achieved by suppressing the ovulation.

The majority of hormonal contraceptives and conception boosters focus on the ovulatory phase of the menstrual cycle because it is the most important determinant of fertility. Hormone therapy can positively or negatively interfere with ovulation and can give a sense of cycle control to the woman.

Estradiol and progesterone, taken in various forms including combined oral contraceptive pills, mimics the hormonal levels of the menstrual cycle and engage in negative feedback of folliculogenesis and ovulation.