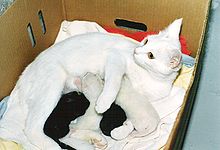 Lactation describes the secretion of milk from the mammary glands and the period of time that a mother lactates to feed her young. The process occurs in all female mammals, however it predates mammals.[1] In humans the process of feeding milk is called breastfeeding or nursing. In most species milk comes out of the mother's nipples; however, the platypus (a non-placental mammal) releases milk through ducts in its abdomen. In only one species of mammal, the Dayak fruit bat, is milk production a normal male function. In some other mammals, the male may produce milk as the result of a hormone imbalance. This phenomenon may also be observed in newborn infants as well (for instance witch's milk).

Galactopoiesis is the maintenance of milk production. This stage requires prolactin (PRL) and oxytocin.

The chief function of lactation is to provide nutrition and immune protection to the young after birth. In almost all mammals, lactation induces a period of infertility, which serves to provide the optimal birth spacing for survival of the offspring.[2]

When the baby sucks its mother's breast, a hormone called oxytocin compels the milk to flow from the alveoli, through the ducts (milk canals) into the sacs (milk pools) behind the areola and then into the baby's mouth

From the twenty-fourth week of pregnancy (the second and third trimesters), a woman's body produces hormones that stimulate the growth of the milk duct system in the breasts:

By the fifth or sixth month of pregnancy, the breasts are ready to produce milk. It is also possible to induce lactation without pregnancy.

During the latter part of pregnancy, the woman's breasts enter into the Lactogenesis I stage. This is when the breasts make colostrum (see below), a thick, sometimes yellowish fluid. At this stage, high levels of progesterone inhibit most milk production. It is not a medical concern if a pregnant woman leaks any colostrum before her baby's birth, nor is it an indication of future milk production.

At birth, prolactin levels remain high, while the delivery of the placenta results in a sudden drop in progesterone, estrogen, and HPL levels. This abrupt withdrawal of progesterone in the presence of high prolactin levels stimulates the copious milk production of Lactogenesis II.

When the breast is stimulated, prolactin levels in the blood rise, peak in about 45 minutes, and return to the pre-breastfeeding state about three hours later. The release of prolactin triggers the cells in the alveoli to make milk. Prolactin also transfers to the breast milk. Some research indicates that prolactin in milk is greater at times of higher milk production, and lower when breasts are fuller, and that the highest levels tend to occur between 2 a.m. and 6 a.m.[4]

Other hormones—notably insulin, thyroxine, and cortisol—are also involved, but their roles are not yet well understood. Although biochemical markers indicate that Lactogenesis II begins about 30–40 hours after birth, mothers do not typically begin feeling increased breast fullness (the sensation of milk "coming in the breast") until 50–73 hours (2–3 days) after birth.

Colostrum is the first milk a breastfed baby receives. It contains higher amounts of white blood cells and antibodies than mature milk, and is especially high in immunoglobulin A (IgA), which coats the lining of the baby's immature intestines, and helps to prevent pathogens from invading the baby's system. Secretory IgA also helps prevent food allergies.[5] Over the first two weeks after the birth, colostrum production slowly gives way to mature breast milk.[3]

The hormonal endocrine control system drives milk production during pregnancy and the first few days after the birth. When the milk supply is more firmly established, autocrine (or local) control system begins. This stage is called Lactogenesis III

During this stage, the more that milk is removed from the breasts, the more the breast will produce milk.[6][7] Research also suggests that draining the breasts more fully also increases the rate of milk production.[8] Thus the milk supply is strongly influenced by how often the baby feeds and how well it is able to transfer milk from the breast. Low supply can often be traced to:

The release of the hormone oxytocin leads to the milk ejection or let-down reflex. Oxytocin stimulates the muscles surrounding the breast to squeeze out the milk. Breastfeeding mothers describe the sensation differently. Some feel a slight tingling, others feel immense amounts of pressure or slight pain/discomfort, and still others do not feel anything different.

The let-down reflex is not always consistent, especially at first. The thought of breastfeeding or the sound of any baby can stimulate this reflex, causing unwanted leakage, or both breasts may give out milk when an infant is feeding from one breast. However, this and other problems often settle after two weeks of feeding.[citation needed] Stress or anxiety can cause difficulties with breastfeeding.

A poor milk ejection reflex can be due to sore or cracked nipples, separation from the infant, a history of breast surgery, or tissue damage from prior breast trauma. If a mother has trouble breastfeeding, different methods of assisting the milk ejection reflex may help. These include feeding in a familiar and comfortable location, massage of the breast or back, or warming the breast with a cloth or shower.

A surge of oxytocin also causes the uterus to contract. During breastfeeding, mothers may feel these contractions as afterpains. These may range from period-like cramps to strong labour-like contractions and can be more severe with second and subsequent babies. Some women's breasts also become dry and chapped and even crack open and bleed while breast feeding. Rubbing lanolin on the nipples and areola can help with those problems. [9]

In humans induced lactation and relactation has been observed frequently in primitive cultures and demonstrated with varying success in adoptive mothers. It appears plausible that the possibility of induction of lactation in women (or females of other species) who are not biological mothers does confer an evolutionary advantage especially in groups with high maternal mortality and tight social bonds. [10] [11] The phenomenon has been also observed in most primates, some lemurs and dwarf mongooses.[12][13]

In humans lactation can be induced by a combination physical and psychological stimulation, by drugs or a combination of those methods. [14]

Also, some couples may use lactation for sexual purposes.

Rare accounts of male lactation (as distinct from galactorrhea) exist in historical medical and anthropological literature, although the phenomenon has not been confirmed by more recent literature. [15]

Darwin correctly recognised that mammary glands developed from cutaneous glands and postulated the hypothesis that they evolved from glands in brood pouches of fish where they provided nourishment for eggs.[1] The later aspect of his hypothesis has not been confirmed, but recently the same mechanism has been postulated for early synapsids.[16] Instead the discus fish (Symphysodon aequifasciata) became known for (biparentally) feeding their offspring by epidermal mucus secretion.[17] A closer look reveals that similar to most mammals the secretion of the nourishing fluid may be controlled by prolactin.[18]

Later therapsids such as cynodonts appear to have secreted complex, nutrient-rich milk. This brought them evolutionary advantage by allowing a decline in egg size.[16]

During early evolution of lactation the secretion was through pilosebaceous glands and mammary hairs transported the nourishing fluids to the eggs or youngs. Later the development of the mammary patch rendered mammary hairs obsolete. [16]

Other well known example of nourishing young with secretions of glands is the crop milk of pigeons. Like in mammals and disc fish this also appears closely related to prolactin.[19] Other birds such as flamingos and penguins are utilizing similar feeding techniques.[20] 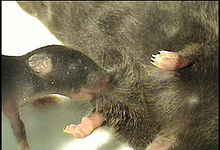