/ˌɒksɨˈtoʊsɪn/) is a mammalian hormone that acts primarily as a neuromodulator in the brain.

Oxytocin is best known for its roles in sexual reproduction, in particular during and after childbirth. It is released in large amounts after distension of the cervix and uterus during labor, facilitating birth, and after stimulation of the nipples, facilitating breastfeeding.

Recent studies have begun to investigate oxytocin's role in various behaviors, including orgasm, social recognition, pair bonding, anxiety, and maternal behaviors.[1] For this reason, it is sometimes referred to as the "love hormone". The inability to secrete oxytocin and feel empathy is linked to sociopathy, psychopathy, narcissism and general manipulativeness.[2]

The word oxytocin was coined from the Greek ὼκυτοκίνη, ōkytokínē, meaning “quick birth”, after its uterine-contracting properties were discovered by Dale in 1906.[3] The milk ejection property of Oxt was described by Ott and Scott in 1910[4] and by Schafer and Mackenzie in 1911.[5] The nine amino acid sequence of Oxt was elucidated by Vincent du Vigneaud et al. and by Tuppy in 1953.[6] and synthesized biochemically soon after by du Vigneaud et al. in 1953.[7][8] Oxytocin was the very first polypeptide hormone to be sequenced and synthesized.

Structure and relation to vasopressin

Oxytocin is a peptide of nine amino acids (a nonapeptide). Its systematic name is cysteine-tyrosine-isoleucine-glutamine-asparagine-cysteine-proline-leucine-glycine-amine (cys – tyr – ile – gln – asn – cys – pro – leu – gly - NH2, or CYIQNCPLG-NH2). The cysteine residues form a disulfide bond. Oxytocin has a molecular mass of 1007 daltons. One international unit (IU) of oxytocin is the equivalent of about 2 micrograms of pure peptide.

The biologically active form of oxytocin, commonly measured by RIA and/or HPLC techniques, is also known as the octapeptide "oxytocin disulfide" (oxidized form), but oxytocin also exists as a reduced dithiol nonapeptide called oxytoceine.[9] It has been theorized that open chain oxytoceine (the reduced form of oxytocin) may also act as a free radical scavenger (by donating an electron to a free radical); oxytoceine may then be oxidized back to oxytocin via the redox potential of dehydroascorbate <---> ascorbate.[10] 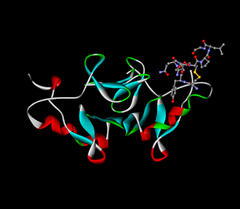 The structure of oxytocin is very similar to that of vasopressin (cys – tyr – phe – gln – asn – cys – pro – arg – gly - NH2), also a nonapeptide with a sulfur bridge, whose sequence differs from oxytocin by 2 amino acids. A table showing the sequences of members of the vasopressin/oxytocin superfamily and the species expressing them is present in the vasopressin article. Oxytocin and vasopressin were isolated and synthesized by Vincent du Vigneaud in 1953, work for which he received the Nobel Prize in Chemistry in 1955.

Oxytocin and vasopressin are the only known hormones released by the human posterior pituitary gland to act at a distance. However, oxytocin neurons make other peptides, including corticotropin-releasing hormone (CRH) and dynorphin, for example, that act locally. The magnocellular neurons that make oxytocin are adjacent to magnocellular neurons that make vasopressin, and are similar in many respects.

The peripheral actions of oxytocin mainly reflect secretion from the pituitary gland. (See oxytocin receptor for more detail on its action.)

Oxytocin evokes feelings of contentment, reductions in anxiety, and feelings of calmness and security around the mate.[19] Many studies have already shown a correlation of oxytocin with human bonding, increases in trust, and decreases in fear. One study confirmed that there is a positive correlation between oxytocin plasma levels and an anxiety scale measuring the adult romantic attachment.[20] This suggests that oxytocin may be important for the inhibition of brain regions that are associated with behavioral control, fear, and anxiety, thus allowing orgasm to occur.

Actions within the brain

Oxytocin secreted from the pituitary gland cannot re-enter the brain because of the blood-brain barrier. Instead, the behavioral effects of oxytocin are thought to reflect release from centrally projecting oxytocin neurons, different from those that project to the pituitary gland, or that are collaterals from them.[46] Oxytocin receptors are expressed by neurons in many parts of the brain and spinal cord, including the amygdala, ventromedial hypothalamus, septum, nucleus accumbens, and brainstem.

Synthetic oxytocin is sold as proprietary medication under the trade names Pitocin and Syntocinon and also as generic oxytocin. Oxytocin is destroyed in the gastrointestinal tract, and therefore must be administered by injection or as nasal spray. Oxytocin has a half-life of typically about three minutes in the blood. Oxytocin given intravenously does not enter the brain in significant quantities - it is excluded from the brain by the blood-brain barrier. There is no evidence for significant central nervous system entry of oxytocin by nasal spray. Oxytocin nasal sprays have been used to stimulate breastfeeding but the efficacy of this approach is doubtful.[58]

Injected oxytocin analogues are used for labor induction and to support labor in case of non-progression of parturition. It has largely replaced ergometrine as the principal agent to increase uterine tone in acute postpartum haemorrhage. Oxytocin is also used in veterinary medicine to facilitate birth and to stimulate milk release. The tocolytic agent atosiban (Tractocile) acts as an antagonist of oxytocin receptors; this drug is registered in many countries to suppress premature labor between 24 and 33 weeks of gestation. It has fewer side-effects than drugs previously used for this purpose (ritodrine, salbutamol, and terbutaline).

Some have suggested that the trust-inducing property of oxytocin might help those who suffer from social anxieties and mood disorders,[43] while others have noted the potential for abuse with confidence tricks[59][60] and military applications.[61]

The Center of Cognitive Neuroscience in Lyon, France concluded that oxytocin may help reduce the negative symptoms of autism.[62]

Oxytocin is relatively safe when used at recommended doses, and side-effects are uncommon.[63] The following maternal events have been reported:[63]

Excessive dosage or long term administration (over a period of 24 hours or longer) have been known to result in tetanic uterine contractions, uterine rupture, postpartum hemorrhage, and water intoxication, sometimes fatal.

Increased uterine motility has led to the following complications in the fetus/neonate:[63]

In addition, use of pitocin in the mother has been associated with neonatal jaundice, retinal hemorrhage, and low five-minute Apgar score.

Oxytocin can be administered to bovine animals in order to increase the production of dairy milk.[citation needed]

The activity of the PAM enzyme system is dependent upon ascorbate, which is a necessary vitamin cofactor. By chance, it was discovered that sodium ascorbate by itself stimulated the production of oxytocin from ovarian tissue over a range of concentrations in a dose-dependent manner.[69] Many of the same tissues (e.g. ovaries, testes, eyes, adrenals, placenta, thymus, pancreas) where PAM (and oxytocin by default) is found are also known to store higher concentrations of vitamin C.[70]

In the hypothalamus, oxytocin is made in magnocellular neurosecretory cells of the supraoptic and paraventricular nuclei and is stored in Herring bodies at the axon terminals in the posterior pituitary. It is then released into the blood from the posterior lobe (neurohypophysis) of the pituitary gland. These axons (likely, but dendrites have not been ruled out) have collaterals that innervate oxytocin receptors in the nucleus accumbens.[46] The peripheral hormonal and behavioral brain effects of oxytocin it has been suggested are coordinated through its common release through these collaterals.[46] Oxytocin is also made by some neurons in the paraventricular nucleus that project to other parts of the brain and to the spinal cord.[71] Depending on the species, oxytocin-receptor expressing cells are located in other areas, including the amygdala and bed nucleus of the stria terminalis.

In the pituitary gland, oxytocin is packaged in large, dense-core vesicles, where it is bound to neurophysin I as shown in the inset of the figure; neurophysin is a large peptide fragment of the larger precursor protein molecule from which oxytocin is derived by enzymatic cleavage.

Secretion of oxytocin from the neurosecretory nerve endings is regulated by the electrical activity of the oxytocin cells in the hypothalamus. These cells generate action potentials that propagate down axons to the nerve endings in the pituitary; the endings contain large numbers of oxytocin-containing vesicles, which are released by exocytosis when the nerve terminals are depolarised.

Outside the brain, oxytocin-containing cells have been identified in several diverse tissues including the corpus luteum,[72][73] the interstitial cells of Leydig,[74] the retina,[75] the adrenal medulla,[76] the placenta,[77] the thymus[78] and the pancreas.[79] The finding of significant amounts of this classically "neurohypophysial" hormone outside the central nervous system raises many questions regarding its possible importance in these different tissues.

Oxytocin is synthesized by corpora lutea of several species, including ruminants and primates. Along with estrogen, it is involved in inducing the endometrial synthesis of prostaglandin F2α to cause regression of the corpus luteum.

The Leydig cells in some species have also been shown to possess the biosynthetic machinery to manufacture testicular oxytocin de novo, to be specific, in rats (which can synthesize Vitamin C endogenously), and in guinea pigs, which, like humans, require an exogenous source of vitamin C (ascorbate) in their diets.[80]

The oxytocin receptor in humans has several alleles, which differ in their effectiveness. Individuals homozygous for the "G" allele, when compared to carriers of the "A" allele, show higher empathy, lower stress response,[81] as well as lower prevalence of autism and of poor parenting skills.[82]

Virtually all vertebrates have an oxytocin-like nonapeptide hormone that supports reproductive functions and a vasopressin-like nonapeptide hormone involved in water regulation. The two genes are usually located close to each other (less than 15,000 bases apart) on the same chromosome and are transcribed in opposite directions (however, in fugu,[83] the homologs are further apart and transcribed in the same directions).

It is thought that the two genes resulted from a gene duplication event; the ancestral gene is estimated to be about 500 million years old and is found in cyclostomata (modern members of the Agnatha).[35]