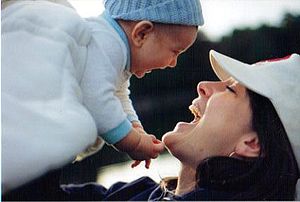 A mother holds up her child.

The maternal bond (or motherly bond) is typically the relationship between a mother and her child.

While it typically occurs due to pregnancy and childbirth, it may also occur between a woman and an unrelated child, such as in adoption. There are hundreds of potential factors, both physical and emotional, which can influence the mother-child bonding process.

Many new mothers do not always experience the "instantly-in-mother-love" emotions. Bonding is a gradually unfolding experience that can take hours, days, weeks, or even months to develop.

The maternal bond between a human female and her biological child usually begins to develop during pregnancy, with her normally adapting her lifestyle to suit the needs of the developing infant. Beginning around 18 to 25 weeks, the mother also can feel the fetus moving, which can enhance bonding, as can seeing her baby during an ultrasound scan.

The developing fetus hears the mother's heart beat and voice and may respond to touch or movement. By the seventh month of pregnancy, two-thirds of women may report a strong maternal bond.[1]

Mothers who did not want the pregnancy typically have a lower quality relationship with the child.[2] They are also more likely to suffer from post-partum depression or other mental health problems, and less likely to breast-feed the infant.[2]

The process of childbirth ideally greatly adds to this bond - though that is not always the case, as every birth and every mother is unique. Situational factors may include a traumatic birth, the pregnant woman's own mother's parenting style, experienced stress, social support, and the influence of her spouse.

The emotional bonding theory first appeared in the mid-1970s, and by the 1980s bonding had become an accepted maternity term, after which the process became analysed and scrutinised to the point of creating another term - poor bonding.[citation needed]