Child abandonment is the practice of relinquishing interests and claims over one's offspring with the intent of never again resuming or reasserting them. Causes include many social and cultural factors as well as mental illness. An abandoned child is called a foundling (as opposed to a runaway or an orphan).

Poverty is often a root cause of child abandonment. Persons in cultures with poor social welfare systems who are not financially capable of taking care of a child are more likely to abandon him/her. Political conditions, such as difficulty in adoption proceedings, may also contribute to child abandonment, as can the lack of institutions, such as orphanages, to take in children whom their parents cannot support. Societies with strong social structures and liberal adoption laws tend to have lower rates of child abandonment.

Historically, many cultures practise abandonment of infants, called "exposure." Although such children would survive if taken up by others, exposure is often considered a form of infanticide—as described by Tertullian in his Apology: "it is certainly the more cruel way to kill. . . by exposure to cold and hunger and dogs"

Similarly, there have been instances of homicidal neglect by confinement of infants or children such as in the affair of the Osaka child abandonment case or the affair of 2 abandoned children in Calgary, Alberta, Canada by their mother Rie Fujii.

Medieval laws in Europe governing child abandonment, as for example the Visigothic Code, often prescribed that the person who had taken up the child was entitled to the child's service as a slave.[1]

Today, abandonment of a child is considered to be a serious crime in many jurisdictions because it can be considered malum in se (wrong in itself) due to the direct harm to the child, and because of welfare concerns (in that the child often becomes a burden upon the public fisc). Many jurisdictions have exceptions in the form of safe haven laws, which apply to babies left in designated places such as hospitals. For example, in the U.S. state of Georgia, it is a misdemeanor to willfully and voluntarily abandon a child, and a felony to abandon one's child and leave the state. In 1981, Georgia's treatment of abandonment as a felony when the defendant leaves the state was upheld as constitutional by the U.S. Supreme Court.[2]

In the UK abandoning a child under the age of 2 years is a criminal offence.[3] In 2004 49 babies were abandoned nationwide with on average slightly more boys than girls being abandoned.[3]

Foundlings, who may be orphans, can combine many advantages to a plot: mysterious antecedents, leading to plots to discover them; high birth and lowly upbringing. Foundlings have appeared in literature in some of the oldest known tales.[4] The most common reasons for abandoning children in literature are oracles that the child will cause harm; the mother's desire to conceal her illegitimate child, often after rape by a god; or spite on the part of people other than the parents, such as sisters and mothers-in-law in such fairy tales as The Dancing Water, the Singing Apple, and the Speaking Bird. In some chivalric romances, such as Le Fresne and the Swan-Children, in the variant Beatrix, some children of a multiple birth are abandoned after the heroine has taunted another woman with a claim that such a birth is proof of adultery and then suffered such a birth of her own.[5] Poverty usually features as a cause only with the case of older children, who can survive on their own. Indeed, most such individuals are of royal or noble birth; their abandonment means they grow up in ignorance of their true social status.[6]

One of the earliest surviving examples of child abandonment in popular culture is that of Oedipus who is left to die as a baby in the hills by a herdsman ordered to kill the baby, but is found and grows up to unwittingly marry his biological mother.

In many tales, such as Snow White, the child is actually abandoned by a servant who had been given orders to put the child to death.

Children are often abandoned with birth tokens, which act as plot devices to ensure that the child can be identified. In Shakespeare's The Winter's Tale, a recognition scene in the final act reveals by these that Perdita is a king's daughter rather than a shepherdess, and so suitable for her prince lover.[7] Similarly, when the heroine of Le Fresne reveals the brocade and the ring she was abandoned with, her mother and sister recognize her; this makes her a suitable bride for the man whose mistress she had been.[8] 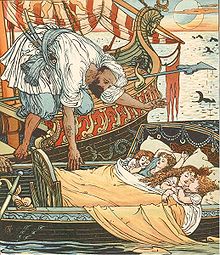 The children of Queen Blondine and of her sister, Princess Brunette, picked up by a Corsair after seven days at sea; illustration by Walter Crane to the fairy tale Princess Belle-Etoile

From Oedipus onward, Greek and Roman tales are filled with exposed children who escaped death to be reunited with their families—usually, as in Longus's Daphnis and Chloe, more happily than in Oedipus's case. Grown children, having been taken up by strangers, were usually recognized by tokens that had been left with the exposed baby: in Euripides's Ion, Creüsa is about to kill Ion, believing him to be her husband's illegitimate child, when a priestess reveals the birth-tokens that show that Ion is her own, abandoned infant.

This may reflect the widespread practice of child abandonment in their cultures. On the other hand, the motif is continued through literature where the practice is not widespread. William Shakespeare used the abandonment and discovery of Perdita in The Winter's Tale, and Edmund Spenser reveals in the last Canto of Book 6 of The Faerie Queen that the character Pastorella, raised by shepherds, is in fact of noble birth. Henry Fielding, in one of the first novels, recounted The History of Tom Jones, a Foundling. Ruth Benedict, in studying the Zuni, found that the practice of child abandonment was unknown, but featured heavily in their folktales.[9]

Still, even cultures that do not practice it may reflect older customs; in medieval literature, such as Sir Degaré and Lay le Freine, the child is abandoned immediately after birth, which may reflect pre-Christian practices, both Scandavian and Roman, that the newborn would not be raised without the father's decision to do so.[10]

The strangers who take up the child are often shepherds or other herdsmen. This befell not only Oedipus, but also Cyrus II of Persia, Amphion and Zethus and several of the characters listed above. Romulus and Remus were suckled by a wolf in the wilderness, but afterward, again found by a shepherd. This ties this motif in with the genre of the pastoral. This can imply or outright state that the child benefits by this pure upbringing by unspoiled people, as opposed to the corruption that surrounded his birth family.

Moses is unusual in that he is taken up by a princess, who is of superior birth to his mother, but like the other foundlings listed above, he reaches adulthood and returns to his birth family. This is the usual pattern in such stories.

The opposite pattern, of a child remaining with its adoptive parents, is less common but occurs. In the Indian epic Mahabharata, Karna is never reconciled with his mother, and dies in battle with her legitimate son. In the Grimm fairy tale Foundling-Bird, Foundling Bird never learns of, let alone reunites with, his parents. George Eliot depicted the abandonment of the character Eppie in Silas Marner; despite learning her true father at the end of the book, she refuses to leave Silas Marner who raised her.

When the cause of the abandonment is a prophecy, the abandonment is usually instrumental in causing the prophecy to be fulfilled. Besides Oedipus, Greek legends also included Telephus, who was prophesied to kill his uncle; his ignorance of his parentage, stemming from his abandonment, caused his uncle to jeer at him and him to kill the uncle in anger.

When older children are abandoned in fairy tales, while poverty may be cited as a cause, as in Hop o' My Thumb, the most common effect is when poverty is combined with a stepmother's malice, as in Hansel and Gretel (or sometimes, a mother's malice). The stepmother's wishes may be the sole cause, as in Father Frost. In these stories, the children seldom find adoptive parents, but malicious monsters, such as ogres and witches;[13] outwitting them, they find treasure enough to solve their poverty. The stepmother may die coincidentally, or be driven out by the father when he hears, so that the reunited family can live happily in her absence.

In a grimmer variation, the tale Babes in the Wood features a wicked uncle in the role of the wicked stepmother, who gives an order for the children to be killed. However, although the servants scruple to obey him, and the children are abandoned in the woods, the tale ends tragically: the children die, and their bodies are covered with leaves by robins.

Foundlings still appear in modern literature. In G. B. Shaw's stage-play 'Major Barbara', industrialist Mr. Upshaft (a foundling himself), intently searches for a foundling to assume the family business. Superman may be seen as a continuation of the foundling tradition, the lone survivor of an advanced civilization who is found and raised by Kansas farmers in a pastoral setting, and later discovers his alien origins and uses his powers for good.[14] Charlie Chaplin's The Kid revolves about the Tramp's efforts to raise an abandoned child. In the graphic novel Aqua Leung, the main protagonist is a prince who is whisked out of a castle under attacked in a basket like device and then found by a couple and raised on land so that his father's enemies do not find him. He returns to the seas to fulfill the prophecy thought to be his father's but that was actually his. Elora Danan, in the film Willow, and Lir, in the novel The Last Unicorn, both continue the tradition of foundlings abandoned because of prophecies, and who fulfill the prophecies because of their abandonment. In the last book of The Chronicles of Prydain, Dallben reveals to the hero Taran that he is a foundling; in a story set in the same world, "The Foundling", Dallben himself proves to be also a foundling. The character Leela from Futurama was a foundling, given to the Ophanarium and a note in an alien language to make people believe that she was an alien, and not a mutant (who would have been forced to live in the sewers, with the other mutants).

In many cartoons made prior to the 1980s (and some made during and afterward), it is not uncommon for a wily character (often a homeless individual) to disguise themself as a foundling. This is most often accomplished by the character donning a diaper (and sometimes a gown and bonnet), writing a note (usually simply saying "Please take care of my baby!") and laying in a bassinet or basket after knocking on the door or pressing the doorbell. This was parodied in the movie Little Man.