Development begins with fertilization, the process by which the male gamete, the sperm cell, and the female gamete, the egg, fuse to produce a zygote. In pregnancy the 3 stages are commonly referred as Z.E.F.[by whom?] - meaning Zygote, Embryo, Fetus.

In medicine, the beginning of pregnancy is the instant a sperm cell enters an ovum and forms a viable zygote.[citation needed] Recently,[citation needed] in western medicine, pregnancy is defined as beginning when a zygote becomes implanted in a woman's uterus. This occurs when the zygote then becomes embedded into the endometrium (lining of the uterus) where it forms a placenta, for the purpose of receiving essential nutrients through the uterus wall. The umbilical cord in an unborn child helps get the nutrients to the child and helps get rid of the waste from the child. Before the placenta is developed the blastocyst receives its nutrients from the yolk sac, which is contained within the blastocyst.

The zygote undergoes rapid cell divisions with no significant growth (a process known as cleavage) and cellular differentiation, leading to development of an embryo.

Childbirth is the process in which the baby is born. Age is defined relative to this event in most cultures.

There are no universal definitions for terms of age-related physical development stages, but following are some approximate age ranges: 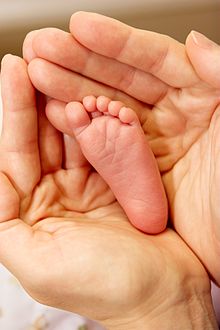 Adult hands holding the foot of a baby

Also sometimes used are terms that specify one's age in numbers, such as:

Note: the Tanner stages can be used to approximately judge a child's age based on physical development.