Pubic hair is hair in the frontal genital area, the crotch, and sometimes at the top of the inside of the legs; these areas form the pubic region.

Although fine vellus hair is present in the area in childhood, the term pubic hair is generally restricted to the heavier, longer and coarser hair that develops with puberty as an effect of rising levels of androgens. Pubic hair is therefore part of the androgenic hair.

The development of pubic hair can be assessed using the Tanner scale. Before the onset of puberty, the genital area of both boys and girls has very fine vellus hair, referred to as Tanner stage 1 hair.[1] As puberty begins, the body produces rising levels of the sex hormones known as androgens, and in response the skin of the genital area begins to produce thicker and rougher, often curlier, hair with a faster growth rate.[2] The onset of pubic hair development is termed pubarche. The change for each hair follicle is relatively abrupt, but the extent of skin which grows androgenic hair gradually increases over several years.

In males, the first pubic hair appears as a few sparse hairs on the scrotum or at the upper base of the penis (stage 2). Within a year, hairs around the base of the penis are numerous (stage 3). Within 3 to 4 years, hair fills the pubic area (stage 4) and becomes much thicker and darker, and by 5 years extends to the near thighs and upwards on the abdomen toward the umbilicus (stage 5).[3]

Other areas of the skin are similarly, though slightly less, sensitive to androgens and androgenic hair typically appears somewhat later. In rough sequence of sensitivity to androgens and appearance of androgenic hair, are the armpits (axillae), perianal area, upper lip, preauricular areas (sideburns), periareolar areas (nipples), middle of the chest, neck under the chin, remainder of chest and beard area, limbs and shoulders, back, and buttocks.

Although generally considered part of the process of puberty, pubarche is distinct and independent of the process of maturation of the testicles that leads to sexual maturation and fertility. Pubic hair can develop from adrenal androgens alone, and can develop even when the ovaries or testes are defective and nonfunctional. See puberty for details.

There is little if any difference in the capacity of male and female bodies to grow hair in response to androgens. The obvious sex-dimorphic difference in hair distribution in men and women is primarily a result of differences in the levels of androgen reached as maturity occurs.

Pubic hair and axillary (armpit) hair can vary in color considerably from the hair of the scalp. In most people it is darker, although it can also be lighter. In most cases it is most similar in color to the eyebrows of the individual.[4] On some individuals, pubic hair is thick and/or coarse; on others it may be sparse and/or fine; these varieties may appear in either sex. Hair texture varies from tightly curled to entirely straight. Pubic hair patterns can also vary by race and ethnicity.

Patterns of pubic hair, known as the escutcheon, vary between sexes. On most women, the pubic patch is triangular and lies over the mons pubis. On many men, the pubic patch tapers upwards to a line of hair pointing towards the navel (see abdominal hair), roughly a more upward-pointing triangle.[4] As with axillary (armpit) hair, pubic hair is associated with a concentration of sebaceous glands in the area. 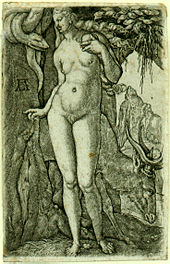 In ancient Egyptian art, female pubic hair is indicated in the form of painted triangles.[5] In medieval and classical European art, it was very rarely depicted, and male pubic hair was often, but not always, omitted.[6] Sometimes it was portrayed in stylized form, as was the case with Greek graphic art.[7] The same was true in much Indian art, and in other Eastern portrayals of the nude. In 16th century southern Europe Michelangelo showed the male David with stylized pubic hair, but female bodies remained hairless below the head. Nevertheless, Michelangelo’s male nudes on the Sistine chapel ceiling display no pubic hair. In Renaissance northern Europe, pubic hair was more likely to be portrayed than in the south, more usually male, but occasionally female.

According to John Ruskin's biographer Mary Lutyens, the notable author, artist, and art critic was apparently accustomed only to the hairless nudes portrayed unrealistically in art, never having seen a naked woman before his wedding night. He was allegedly so shocked by his discovery of his wife Effie's pubic hair that he rejected her, and the marriage was later legally annulled. He is supposed to have thought his wife was freakish and deformed.[9] Later writers have often followed Lutyens and repeated this version of events. For example Gene Weingarten in his book I'm with Stupid (2004) writes that "Ruskin had [the marriage] annulled because he was horrified to behold upon his bride a thatch of hair, rough and wild, similar to a man's. He thought her a monster."[10] However, there is no proof for this, and some disagree. Peter Fuller in his book Theoria: Art and the Absence of Grace writes, "It has been said that he was frightened on the wedding night by the sight of his wife's pubic hair; more probably, he was perturbed by her menstrual blood." Ruskin's biographers Tim Hilton and John Batchelor also believe that menstruation is the more likely explanation."[11] 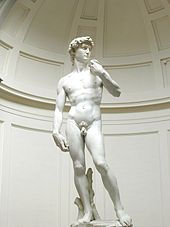 Francisco Goya's The Nude Maja has been considered as probably the first European painting to show woman's pubic hair, though others had hinted at it. The painting was considered quite pornographic at the time.[12]

Gustave Courbet's L’Origine du monde (The Origin of the World, 1866), was considered scandalous because it showed the exposed female genitals in their totality with thick hair. Examples of male pubic hair in contemporary art are harder to find.[citation needed]

Among the upper class in 19th century Victorian Britain, pubic hair from one's lover was frequently collected as a souvenir. The curls were, for instance, worn like cockades in men's hats as potency talismans, or exchanged among lovers as tokens of affection.[13] The museum of St. Andrews University in Scotland has in its collection a snuff box full of pubic hair of one of King George IV's mistresses, possibly Elizabeth Conyngham, which the notoriously licentious monarch donated to the Fife sex club, The Beggar's Benison.[13]

Trimming or completely removing pubic hair has become a custom in many cultures. In Islamic societies, for example, removing the pubic hair is a religiously endorsed practice under the Sunan al-Fitra.[14] A preference for hairless genitals is known as acomoclitism. The method of removing hair is called depilation (when removing only the hair above the skin) or epilation (when removing the entire hair). Beauty salons often offer various waxing services. It is sometimes referred to as "pubic topiary".[15][16][17]

It is unusual for pubic hair to be dyed or painted, except incidentally to bodypainting, but although concerns have been raised about the safety of using regular hair dye for this purpose, dye has been formulated so that women may match their pubic hair either to match the (dyed) hair on their heads (colloquially referred to as 'matching the carpet to the drapes/curtains' or 'collar and cuffs'), or in whimsical colours.[18]

Some arguments for modification of pubic hair have included:[19] 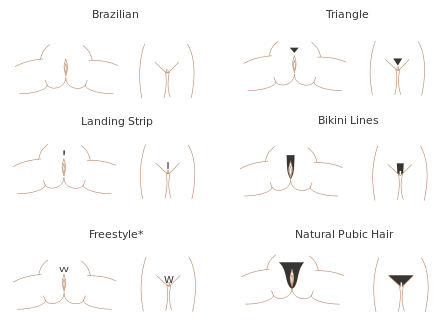 The modification of pubic hair can also be considered a statement about one's style or personal lifestyle as can leaving it unmodified. The fashion designer Mary Quant was notably proud that her husband trimmed hers into a heart shape.[20]

no trimming and/or maintenance

hair length is shortened but not removed or shaped

hair removed (generally waxed) from the sides to form a triangle so that pubic hair cannot be seen while wearing swimwear. This can range from the very edge of the "bikini line" to up to an inch reduction on either side. Hair length can be from an inch and a half to half an inch

hair sharply removed from the sides to form a long centered vertical rectangle, hair length about quarter of an inch. Also known as Hitler Moustache.

pubic hair completely removed except for a very thin remnant, centered, narrow stripe above the vulva approximately an inch in height, and the hair length in the sub-centimeter range

coloring pubic hair to match hair on the head or to give it a unique look (for example, red—in the shape of a heart)

An upside-down triangle, the name referring to the cross cut or silhouette of a pyramid.

V-shaped,[23] heart-shaped, arrow, initials, etc. These are usually variations of the Brazilian/G-wax, where a design is formed of the pubic hair above completely bare vulva. A controversial Gucci commercial included female pubic hair shaved into a "G."[24]