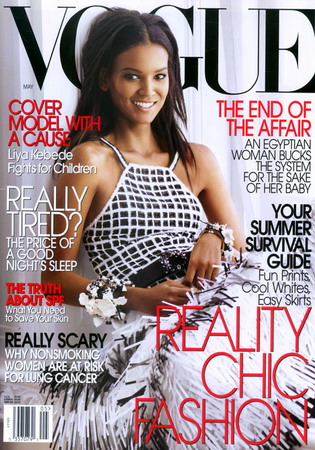 "Vogue" is a and lifestyle published in eighteen countries by . Each month, Vogue publishes a magazine addressing topics of fashion, life and design.

"Vogue" was described by book critic Caroline Weber in "" in December 2006 as "the world's most influential ":

"Vogue" was founded as a bimonthly publication by Arthur Baldwin Turnure in 1892. When he passed away in 1909, Conde Nast picked it up and slowly began growing the publication. The magazine's number of subscriptions surged during the Depression and again during .

In the 1960s, with as editor-in-chief and personality, the magazine began to appeal to the youth of the by focusing more on contemporary fashion and editorial features openly discussing sexuality. "Vogue" also continued making household names out of models, a practice that continued with , , , and others. [cite news|last=Dwight| first=Eleanor| title=The Divine Mrs. V| publisher = "New York Magazine"| url =http://nymag.com/nymetro/shopping/fashion/features/n_7930/index1.html |accessdate =2007-11-18]

The current editor-in-chief of American "Vogue" is , noted for her trademark bob and her practice of wearing indoors. Since taking over in 1988, Wintour has worked to protect the magazine's high status and reputation among fashion publications. In order to do so, she has made the magazine focus on new and more accessible ideas of "fashion" for a wider audience.

Wintour's presence at fashion shows is often takenwho|date=September 2008 as an indicator of the designer's profile within the industry. In 2003, she joined the in creating a fund that provides money and guidance to at least two emerging designers each year.

The contrast of Wintour's vision with that of her predecessor has been noted as striking by observers, both critics and defenders. Amanda Fortini, fashion and style contributor to "Slate" argues that her policy has been beneficial for "Vogue":

As Wintour came to personify the magazine's image, she and "Vogue" drew critics. Wintour's one-time assistant at the magazine, , authored a entitled "The Devil Wears Prada", a best-selling novel published in 2003 which was made into a highly successful, -nominated film in 2006. The central character resembled Weisberger, and her boss was a powerful editor-in-chief of a fictionalized version of "Vogue". The novel portrays a magazine ruled by "the Antichrist and her coterie of fashionistas, who exist on cigarettes, Diet Dr. Pepper, and mixed green salads", according to a review in the "New York Times". The editor who personifies the magazine she runs is described by Weisberger as being "an empty, shallow, bitter woman who has tons and tons of gorgeous clothes and not much else".

In 2007, "Vogue" drew criticism from the anti-smoking group, "Campaign for Tobacco-Free Kids", for carrying tobacco advertisements in the magazine. The group claims that volunteers sent the magazine more than 8,000 protest e-mails or faxes regarding the ads. The group also claimed that in response, they received scribbled notes faxed back on letters that had been addressed to editor Anna Wintour stating, "Will you stop? You're killing trees!"

A spokesperson for Condé Nast released an official statement saying that, "Vogue" does carry tobacco advertising. Beyond that we have no further comment".

In April 2008, the American Vogue had a cover shot by famed photographer , featuring supermodel and , a black basketball superstar. This was the third time that Vogue featured a male on the cover of the American issue, and the first time with a black man. Criticism was immediate from many commentators because it was perceived as a prejudiced depiction of James beside the much smaller Gisele in a pose reminiscent of carrying off . [ [http://www.usatoday.com/life/people/2008-03-24-vogue-controversy_N.htm?csp=3 LeBron James' 'Vogue' cover called racially insensitive - USATODAY.com ] ] [ [http://magculture.com/blog/?p=1720 magCulture blog] ] Further criticism arose when the website "Watching the Watchers" analyzed the photo alongside the World War I recruitment poster titled "Destroy This Mad Brute". [ [http://watchingthewatchers.org/news/1378/annie-leibovitz-monkeys-around-lebron Annie Leibovitz Monkeys Around with LeBron James ] ]

In 2005, Condé Nast launched "" and announced plans for an American version of "Vogue Living" launching in late fall of 2006 (there is currently an edition in Australia).

also publishes "", a version of the magazine for teen girls, the Seventeen demographic, in the United States. and has a "" magazine (currently suspended from further publication), in addition to "" and "Vogue Entertaining + Travel."

"Vogue Hommes International" is an international men's fashion magazine based in Paris, France, and "L'uomo Vogue" is the Italian men's version. Other Italian versions of "Vogue" include "Vogue Casa" and "Bambini Vogue".

Until 1961, Vogue was also the publisher of "Vogue Patterns", a home sewing pattern company. It was sold to Butterick Publishing which also licensed the Vogue name.

October 2007 saw the recent launch of "Vogue India", which featured , , and on the cover.

A & E IndieFilms and are to shoot a feature-length documentary chronicling the making of "Vogue"'s September issue. Cutler had approached Wintour in 2004 and will direct the untitled pic which will be shot over eight months as Wintour prepares the fall fashion issue, known in the industry as the "fashion bible". The filmmakers plan to have it completed in 2008.