A razor is a bladed tool primarily used in the removal of unwanted body hair through the act of shaving. Kinds of razors include straight razors, disposable razors and electric razors.

While the razor has been in existence since the Bronze Age, its modern counterpart was invented in the 18th century, and the 1930s saw the invention of electric razors. In the 21st century, the safety razor - electric or not - is most commonly used by both men and women, but other kinds still exist.[1] 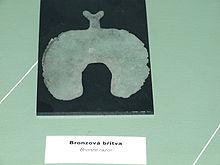 Razors have been identified from many Bronze Age cultures. These were made of bronze or obsidian and were generally oval in shape, with a small tang protruding from one of the short ends.[2]

Various forms of razors were used throughout history, which are different in appearance but similar in use to modern straight razors. In prehistoric times clam shells, shark's teeth, and flint were sharpened and used to shave with. Drawings of such blades were found in prehistoric caves. Some tribes still use blades made of flint to this day. Excavations in Egypt have unearthed solid gold and copper razors in tombs dating back to the 4th millennium BC. The Roman historian Livy reported that the razor was introduced in ancient Rome in the 6th century BC. by legendary king Lucius Tarquinius Priscus. Priscus was ahead of his time because razors did not come to general use until a century later.[3]

The first modern straight razor complete with decorated handles and hollow ground blades was constructed in Sheffield, in England, the centre of the cutlery industry, in the 18th and 19th centuries. Benjamin Huntsman produced the first superior hard steel grade, through a special crucible process, suitable for use as blade material in 1740. Huntsman's process was adopted by the French sometime later; albeit reluctantly at first due to nationalist sentiments. The English manufacturers were even more reluctant than the French to adopt the process and only did so after they saw its success in France.[3] Sheffield steel, a highly polished steel, also known as Sheffield silver steel' and famous for its deep gloss finish, is considered a superior quality steel and is still used to this day in France by such manufacturers as Thiers Issard.[4] 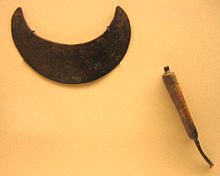 Razor (top) and nail cutter with bone handle (bottom) found in a grave of the Hallstatt culture.

In the 18th and 19th centuries the wealthy had servants to shave them or could frequent barbershops. Daily shaving was not a widespread practice in the 19th century so some people never shaved. The custom of shaving every day among American men is a 20th century innovation.[5] In the 19th century, cutlers in Sheffield, England and Solingen, Germany produced a variety of razors. 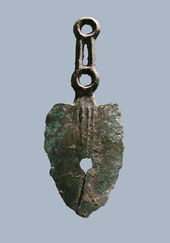 Razor made of bronze from the first Iron Age

Straight razors were the most common form of shaving before the 20th century and remained that common in many countries until the 1950s.[1] Barbers were specially trained to give customers a thorough and quick shave, and a collection of straight razors ready for use was a common sight in most barbershops. Barbers still have them, but they use them less often.

Straight razors eventually fell out of fashion. Their first challenger was manufactured by King C. Gillette: a double-edged safety razor with replaceable blades. Gillette's idea was the use of the "loss leader" concept, in which the razors were sold at a loss, but the replacement blades earned a high margin and provided continuous sales. They were immensely successful due to advertising campaigns and slogans denigrating the straight razor's effectiveness and questioning its safety.

These new safety razors did not require any serious tutelage to use.[6] The blades were extremely hard to sharpen, and were meant to be thrown away after one use, and rusted quickly if not discarded. They also required a smaller initial investment, though they cost more over time. Despite its long-term advantages, the straight razor lost significant market share. And as shaving became less intimidating and men began to shave themselves more, the demand for barbers providing straight razor shaves decreased.[1]

Around 1960, stainless steel blades which could be used more than once became available, reducing the cost of safety-razor shaving. The first such blades were made by the Wilkinson firm, famous maker of ceremonial swords, in Sheffield. Soon Gillette, Schick, and other manufacturers were making stainless-steel blades.

For more details on this topic, see Straight razor.

Straight razors with open steel blades, also commonly known as cut-throats, were the most commonly used razors before the 20th century. However, they are now chiefly used by barbers.

Straight razors consist of a blade sharpened on one edge. The blade can be made of either stainless steel, which is slower to hone and strop, and holds an edge longer, or high carbon steel, which hones and strops quickly, but has a less durable edge. At present, stainless-steel razors are harder to find than carbon steel, but both are still in production.

The blade rotates on a pin through its tang between two protective pieces called scales: when folded into the scales, the blade is protected from damage, and the user is protected from injury. Handle scales are made of various materials, including mother-of-pearl, celluloid, bone, plastic and wood. They were once made of ivory, but this has been discontinued, though fossil ivory is still used occasionally. 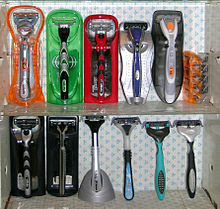 Razors which are similar in use and appearance to straight razors but which use either a standard double edged blade or specially made blades are available.

Disposable razors can be resharpened.

The first safety razor protected the skin from all but the very edge of the blade and was invented in the late 19th century by a Frenchman, Jean-Jacques Perret, who was inspired by the joiner's plane. In 1875 it was marketed by the Kampfe Brothers as "the best available shaving method on the market that won’t cut a user, like straight steel razors."

In 1901, the American inventor King Camp Gillette, with the assistance of William Nickerson, invented a safety razor with disposable blades. Gillette realized that a profit could be made by selling an inexpensive razor with disposable blades. This has been called the Razor and blades business model, or a "loss leader", and has become a very common practice for a wide variety of products.

There are also safety razors that are made of inexpensive materials that are meant to be wholly disposable. One device was invented in 1963 by American entertainer and inventor Paul Winchell.[7] 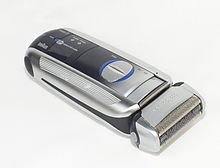 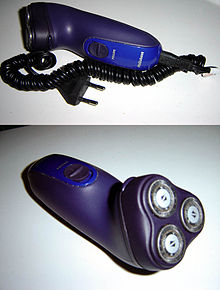 The electric razor (also known as the electric dry shaver) has a rotating or oscillating blade. The electric razor usually does not require the use of shaving cream, soap, or water. The razor may be powered by a small DC motor, which is either powered by batteries or mains electricity. Many modern ones are powered using rechargeable batteries. Alternatively, an electro-mechanical oscillator driven by an AC-energized solenoid may be used. Some very early mechanical shavers had no electric motor and had to be powered by hand, for example by pulling a cord to drive a flywheel.

The first electric razor was patented in 1928 by the American manufacturer Col. Jacob Schick. The Remington Rand Corporation developed the electric razor further, first producing the Remington brand of razor in 1937. Another important inventor was Prof. Alexandre Horowitz, from Philips Laboratories in the Netherlands, who invented the very successful concept of the revolving (rotary) electric razor. It has a shaving head consisting of cutters that cut off the hair entering the head of the razor at skin level. The major manufacturers introduce new improvements to the hair cutting mechanism of their products each few years. Each manufacturer sells several different generations of cutting mechanism at the same time, and for each generation, several models with different features and accessories to reach various price points. The improvements to the cutting mechanisms tend to 'trickle-down' to lower priced models over time.

Early versions of electric razors were meant to be used on dry skin only. Many recent electric razors have been designed to allow for wet/dry use, which also allows them to be cleaned using running water or an included cleaning machine, reducing cleaning effort. Some patience is necessary when starting to use a razor of this type, as the skin usually takes some time to adjust to the way that the electric razor lifts and cuts the hairs. Moisturizers designed specifically for electric shaving are available. 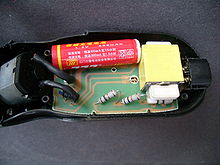 Since at least the mid-1960's[8], battery operated electric razors have been available using rechargeable batteries sealed inside the razor's case, previously nickel cadmium or more recently nickel metal hydride. Some modern shavers use Lithium-ion batteries that do not suffer from memory effect. Sealed battery shavers either have built-in or external charging devices. Some shavers may be designed to plug directly into a wall outlet with a swing out or pop-up plug, or have a detachable AC cord. Other shavers have recharging base units which plug into an AC outlet, which provide DC power at the base contacts (removing the need for the AC to DC convertor to be internal to the razor and reducing the risk of electric shock).

Some models, generally marketed as "travel razors" (or "travel shavers"), use removable rechargeable or disposable batteries, usually size AA or AAA. This offers the option of purchasing batteries while away from home instead of having to carry a compatible charging device.

Wet/dry razors, designed to allow use with soap and water, are exclusively of the battery-operated type (for obvious reasons of electrical safety).

Electric shavers are generally regarded as the greenest solution to men's grooming by sheer virtue of the longevity of the battery life, and the fact that one does not use any water in the process. 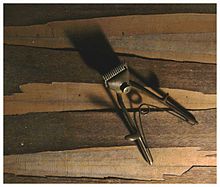 A single-edge razor blade was actually manufactured prior to the advent of the double edge razor, for various applications where the blade is required to be hand-held. Single-edge blades are often a more rigid carbon steel and much thicker. They are used in carpentry for detailed work, sanding, and scraping (in a specialized holder), in mechanical drawing for paper cutting, in plumbing and finish work for grouting and cleaning, for removing paint from flat surfaces such as panes of glass, and in many other applications. Razors are also sometimes used in bread production to slash the surface of an unbaked loaf; in this usage, they are referred to using the French word lame.