A crusher is a machine designed to reduce large rocks into smaller rocks, gravel, or rock dust. Crushers may be used to reduce the size, or change the form, of waste materials so they can be more easily disposed of or recycled, or to reduce the size of a solid mix of raw materials (as in rock ore), so that pieces of different composition can be differentiated. Crushing is the process of transferring a force amplified by mechanical advantage through a material made of molecules that bond together more strongly, and resist deformation more, than those in the material being crushed do. Crushing devices hold material between two parallel or tangent solid surfaces, and apply sufficient force to bring the surfaces together to generate enough energy within the material being crushed so that its molecules separate from (fracturing), or change alignment in relation to (deformation), each other. The earliest crushers were hand-held stones, where the weight of the stone provided a boost to muscle power, used against a stone anvil. Querns and mortars are types of these crushing devices.

In industry, crushers are machines which use a metal surface to break or compress materials. Mining operations use crushers, commonly classified by the degree to which they fragment the starting material, with primary and secondary crushers handling coarse materials, and tertiary and quaternary crushers reducing ore particles to finer gradations. Each crusher is designed to work with a certain maximum size of raw material, and often delivers its output to a screening machine which sorts and directs the product for further processing. Typically, crushing stages are followed by milling stages if the materials need to be further reduced. Crushers are used to reduce particle size enough so that the material can be processed into finer particles in a grinder. A typical circuit at a mine might consist of a crusher followed by a SAG mill followed by a ball mill. In this context, the SAG mill and ball mill are considered grinders rather than crushers.

In operation, the raw material (of various sizes) is usually delivered to the primary crusher's hopper by dump trucks, excavators or wheeled front-end loaders. A feeder device such as an apron feeder, conveyor or vibrating grid controls the rate at which this material enters the crusher, and often contains a preliminary screening device which allows smaller material to bypass the crusher itself, thus improving efficiency. Primary crushing reduces the large pieces to a size which can be handled by the downstream machinery.

Some crushers are mobile and can crush rocks (as large as 60 inches). Primarily used in-pit at the mine face these units are able to move with the large infeed machines (mainly shovels)to increase the tonnage produced. In a mobile road operation, these crushed rocks are directly combined with concrete and asphalt which are then deposited on to a road surface. This removes the need for hauling over-sized material to a stationary crusher and then back to the road surface.

Operation of a jaw crusher

A jaw or toggle crusher consists of a set of vertical jaws, one jaw being fixed and the other being moved back and forth relative to it by a cam or pitman mechanism. The jaws are farther apart at the top than at the bottom, forming a tapered chute so that the material is crushed progressively smaller and smaller as it travels downward until it is small enough to escape from the bottom opening. The movement of the jaw can be quite small, since complete crushing is not performed in one stroke. The inertia required to crush the material is provided by a weighted flywheel that moves a shaft creating an eccentric motion that causes the closing of the gap.

A gyratory crusher is similar in basic concept to a jaw crusher, consisting of a concave surface and a conical head; both surfaces are typically lined with manganese steel surfaces. The inner cone has a slight circular movement, but does not rotate; the movement is generated by an eccentric arrangement. As with the jaw crusher, material travels downward between the two surfaces being progressively crushed until it is small enough to fall out through the gap between the two surfaces.

A gyratory crusher is one of the main types of primary crushers in a mine or ore processing plant. Gyratory crushers are designated in size either by the gape and mantle diameter or by the size of the receiving opening. Gyratory crushers can be used for primary or secondary crushing. The crushing action is caused by the closing of the gap between the mantle line (movable) mounted on the central vertical spindle and the concave liners (fixed) mounted on the main frame of the crusher. The gap is opened and closed by an eccentric on the bottom of the spindle that causes the central vertical spindle to gyrate. The vertical spindle is free to rotate around its own axis. The crusher illustrated is a short-shaft suspended spindle type, meaning that the main shaft is suspended at the top and that the eccentric is mounted above the gear. The short-shaft design has superseded the long-shaft design in which the eccentric is mounted below the gear.

A cone crusher is similar in operation to a gyratory crusher, with less steepness in the crushing chamber and more of a parallel zone between crushing zones. A cone crusher breaks rock by squeezing the rock between an eccentrically gyrating spindle, which is covered by a wear resistant mantle, and the enclosing concave hopper, covered by a manganese concave or a bowl liner. As rock enters the top of the cone crusher, it becomes wedged and squeezed between the mantle and the bowl liner or concave. Large pieces of ore are broken once, and then fall to a lower position (because they are now smaller) where they are broken again. This process continues until the pieces are small enough to fall through the narrow opening at the bottom of the crusher.

A cone crusher is suitable for crushing a variety of mid-hard and above mid-hard ores and rocks. It has the advantage of reliable construction, high productivity, easy adjustment and lower operational costs. The spring release system of a cone crusher acts an overload protection that allows tramp to pass through the crushing chamber without damage to the crusher.

Impact crushers involve the use of impact rather than pressure to crush material. The material is contained within a cage, with openings on the bottom, end, or side of the desired size to allow pulverized material to escape. This type of crusher is usually used with soft and non-abrasive material such as coal, seeds, limestone, gypsum or soft metallic ores. There are two types of impact crushers: horizontal shaft impactor and vertical shaft impactor.

The HSI crushers break rock by impacting the rock with hammers that fixed upon the outer edge of a spinning rotor. The practical use of HSI crushers is limited to soft materials and non abrasive materials, such as limestone, phosphate, gypsum, weathered shales. 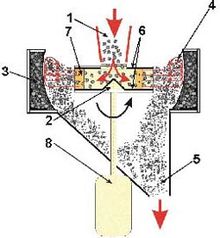 Scheme of a VSI crusher with air-cushion support 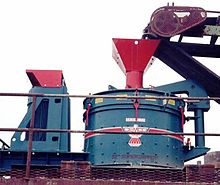 VSI crushers use a different approach involving a high speed rotor with wear resistant tips and a crushing chamber designed to 'throw' the rock against. The VSI crushers utilize velocity rather than surface force as the predominant force to break rock. In its natural state, rock has a jagged and uneven surface. Applying surface force (pressure) results in unpredictable and typically non-cubicle resulting particles. Utilizing velocity rather than surface force allows the breaking force to be applied evenly both across the surface of the rock as well as through the mass of the rock. Rock, regardless of size, has natural fissures (faults) throughout its structure. As rock is 'thrown' by a VSI Rotor against a solid anvil, it fractures and breaks along these fissures. Final particle size can be controlled by 1) the velocity at which the rock is thrown against the anvil and 2) the distance between the end of the rotor and the impact point on the anvil. The product resulting from VSI Crushing is generally of a consistent cubicle shape such as that required by modern SUPERPAVE highway asphalt applications. Using this method also allows materials with much higher abrasiveness to be crushed than is capable with an HSI and most other crushing methods.

VSI crushers generally utilize a high speed spinning rotor at the center of the crushing chamber and an outer impact surface of either abrasive resistant metal anvils or crushed rock. Utilizing cast metal surfaces 'anvils' is traditionally referred to as a "Shoe and Anvil VSI". Utilizing crushed rock on the outer walls of the crusher for new rock to be crushed against is traditionally referred to as "rock on rock VSI". VSI crushers can be used in static plant set-up or in mobile tracked equipment.

The basic concept of the mineral Sizer, is the use of two rotors with large teeth, on small diameter shafts, driven at a low speed by a direct high torque drive system. This design produces three major principles which all interact when breaking materials using Sizer Technology. The unique principles are; The Three-Stage Breaking Action, The Rotating Screen Effect, and The Deep Scroll Tooth Pattern.

The Three-Stage Breaking Action: Initially, the material is gripped by the leading faces of opposed rotor teeth. These subject the rock to multiple point loading, inducing stress into the material to exploit any natural weaknesses. At the second stage, material is broken in tension by being subjected to a three point loading, applied between the front tooth faces on one rotor, and rear tooth faces on the other rotor. Any lumps of material that still remain oversize, are broken as the rotors chop through the fixed teeth of the breaker bar, thereby achieving a three dimensional controlled product size.

The Deep Scroll Tooth Pattern: The deep scroll conveys the larger material to one end of the machine and helps to spread the feed across the full length of the rotors. This feature can also be used to reject oversize material from the machine.[1]

For the most part advances in crusher design have moved slowly. Jaw crushers have remained virtually unchanged for sixty years. More reliability and higher production have been added to basic cone crusher designs that have also remained largely unchanged. Increases in rotating speed, have provided the largest variation. For instance, a 48 inch (120 cm) cone crusher manufactured in 1960 may be able to produce 170 tons/h of crushed rock, whereas the same size cone manufactured today may produce 300 tons/h. These production improvements come from speed increases and better crushing chamber designs.

The largest advance in cone crusher reliability has been seen in the use of hydraulics to protect crushers from being damaged when uncrushable objects enter the crushing chamber. Foreign objects, such as steel, can cause extensive damage to a cone crusher, and additional costs in lost production. The advance of hydraulic relief systems has greatly reduced downtime and improved the life of these machines.