A utility knife is a knife used for general or utility purposes.[1] The utility knife was originally a fixed blade knife with a cutting edge suitable for general work such as cutting hides and cordage, scraping hides, butchering animals, cleaning fish, and other tasks.

Today, the term "utility knife" also includes small folding or retractable-blade knives suited for use in the modern workplace or in the construction industry.

The fixed-blade utility knife was developed some 500,000 years ago, when humans began to make knives made of stone.[1] These knives were general-purpose tools, designed for cutting and shaping wooden implements, scraping hides, preparing food, and for other utilitarian purposes.[1]

By the 19th century the fixed-blade utility knife had evolved into a steel-bladed outdoors field knife capable of butchering or cleaning wild game, shaving or notching wood, preparing campfires, opening tins or cans, and preparing meals. With the invention of the backspring, pocket-size utility knives were introduced with folding blades and other folding tools designed to increase the utility of the overall design. These folding pocket utility knives were widely purchased by civilians and increasingly by military forces for issue to individuals soldiers or sailors. The folding pocketknife and utility tool is typified by the Camper or Boy Scout pocketknife, the U.S. folding utility knife, the Swiss Army Knife, and by certain multi-tools fitted with knife blades. The development of stronger locking blade mechanisms for folding knives such as the Spanish navaja, the Opinel, and the Buck 110 Folding Hunter significantly increased the utility of such knives when employed for heavy-duty tasks such as preparing game or cutting through dense or tough materials.

The fixed or folding blade utility knife remains one of the most popular knife patterns, both for outdoors use (camping, hunting, fishing, gardening, etc.) and indoors use (primarily in the workplace or for construction projects). One of the most popular types of workplace utility knife is the retractable or folding utility knife (also known as a Stanley knife, boxcutter, X-Acto knife, or by various other names). These types of utility knives are designed as multi-purpose cutting tools for use in a variety of trades and crafts. Designed to be lightweight and easy to carry and use, utility knives are commonly used in factories, warehouses, construction projects, and other situations where a tool is routinely needed to mark cut lines, trim plastic or wood materials, or to cut tape, cord, strapping, cardboard, or other packaging material.

In British, Australian and New Zealand English, along with Dutch and Austrian German, a utility knife frequently used in the construction industry is known as a Stanley knife.[2] This name is a genericised trademark named after Stanley Works, a manufacturer of such knives.[3] In Israel and Switzerland, these knives are known as Japanese knives. In Brazil they are known as estiletes or cortadores Olfa (the latter, being another genericised trademark). In Portugal and Canada they are also known as X-Acto (yet another genericised trademark). In the Philippines, Italy, and Egypt, they are simply called cutter. In general Spanish, they are known as cortaplumas (penknife, when it comes to folding blades); in Spain, Mexico, and Costa Rica, they are colloquially known as cutters; and in Uruguay the segmented fixed-blade knives are known as "trinchetas". Other names for the tool are box cutter or boxcutter, razor blade knife, razor knife, carpet knife, pen knife, stationery knife, sheetrock knife, or drywall knife. Some of these names refer to a different kind of knife depending on the region. For example, in the mid-Atlantic US, the X-Acto name is likelier to evoke only a specific subset of these knives (the pencil-shaped hobby knife), which may explain why the "utility knife" name, with its specificity, is more common there for the larger type. Also, in this region, "box cutter" usually evokes only a specific subset of these knives (the simpler type whose body consists only of a flat sleeve stamped from sheet steel), and "pen knife" usually evokes only a folding pocket knife.

Utility knives may use fixed, folding, or retractable or replaceable blades, and come in a wide variety of lengths and styles suited to the particular set of tasks they are designed to perform. Thus, an outdoors utility knife suited for camping or hunting might use a broad three to five-inch fixed blade, while a utility knife designed for the construction industry might feature a replaceable utility or razor blade for cutting packaging, cutting shingles, marking cut lines, or scraping paint.

Large fixed-blade utility knives are most often employed in an outdoors context, such as fishing, camping, or hunting. Outdoor utility knives typically feature sturdy blades from four to six inches in length, with edge geometry designed to resist chipping and breakage. 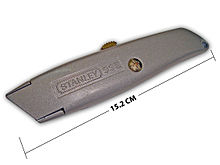 The largest construction or workplace utility knife typically feature retractable and replaceable blades, made of either die-cast metal or molded plastic. Some use standard razor blades, others specialized double-ended utility blades. The user can adjust how far the blade extends from the handle, so that, for example, the knife can be used to cut the tape sealing a package without damaging the contents of the package. When the blade becomes dull, it can be quickly reversed or switched for a new one. Spare or used blades are stored in the hollow handle of some models, and can be accessed by removing a screw and opening the handle. Other models feature a quick-change mechanism that allows replacing the blade without tools, as well as a flip-out blade storage tray. The blades for this type of utility knife come in both double- and single-ended versions, and are interchangeable with many, but not all, of the later copies. Specialized blades also exist for cutting string, linoleum, and other materials.

Another style is a snap-off utility knife that contains a long, segmented blade that slides out from it. As the endmost edge becomes dull, it can be broken off the remaining blade, exposing the next section, which is sharp and ready for use. The snapping is best accomplished with a pair of pliers, and the break occurs at the score lines, where the metal is thinnest. When all the individual segments are used, the knife may be thrown away, or, more often, refilled with a replacement blade. This design was introduced by Japanese manufacturer Olfa Corporation in 1956 as the world's first snap-off blade and was inspired from analyzing the sharp cutting edge produced when glass is broken and how pieces of a chocolate bar break into segments. 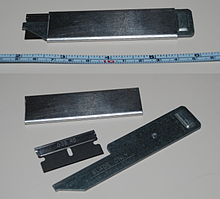 Another utility knife often used for cutting open boxes consists of a simple sleeve around a rectangular handle into which single-edge utility blades can be inserted. The sleeve slides up and down on the handle, holding the blade in place during use and covering the blade when not in use. The blade holder may either retract or fold into the handle, much like a folding-blade pocketknife. The blade holder is designed to expose just enough edge to cut through one layer of corrugated fiberboard, to minimize chances of damaging contents of cardboard boxes.

Most utility knives are not well suited to use as offensive weapons, with the exception of some outdoor-type utility knives employing longer blades. However, even small razor-blade type utility knives may sometimes find use as slashing weapons. It has been suggested by United States government officials that "box-cutter knives" were used in the September 11, 2001 terrorist attacks against the United States, though the exact design of the knives actually used is unclear. (See airport security repercussions due to the September 11 attacks for further discussion.)

Small work-type utility knives have also been used to commit robbery and other crimes, and some schools ban their possession on school grounds. Former New York City mayor Rudy Giuliani initiated a campaign against the sale of box-cutter knives to young people in the 1990s. On June 1, 2004, Japanese elementary school student, Satomi Mitarai, was slashed to death with a segmented-type utility knife.

In Australia, it is illegal to sell a cutting implement such as a utility knife to anyone under 16 years of age, and proof of age is often demanded of purchasers.

Recently, in England, there have been plans to raise the age limit for purchasing knives, including utility knives, from 16 to 18, in an effort to tackle a surge in knife crimes.