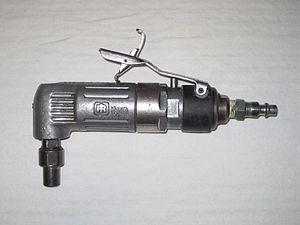 A pneumatic die grinder with a right-angle head.

A die grinder is a handheld power tool used to grind, sand, hone, polish, or machine material, typically metal but also plastic or wood. They are usually pneumatically driven, although versions with electric and flexible shaft drive also exist. Their name comes from one of their earliest and archetypal applications, tool and die work, where they are used to create the precise contours of dies or molds. Especially before the advent of widespread CNC usage, they were heavily relied upon for contouring via manual skill comparable to a sculptor's. CNC now provides much of the contouring for die and mold interior surfaces, but die grinders are still very useful for hundreds of cutting needs, from sculpture-like contouring in the absence of CNC, to cut-off of bar stock, to any of the cutting and grinding needs of fabrication, such as in the work of welders, boilermakers, millwrights, ironworkers (steel erectors), sheet metal workers (such as auto body workers and HVAC technicians), to woodworking (especially cabinet making), hacking, and other hobby or business pursuits. Die grinders are often used for engraving, cylinder head porting, and general shaping of a part.[1]

Die grinders are very similar to rotary tools, and in fact some people do not make any distinction between them. The difference between a die grinder and a rotary tool is mainly one of mental classification rather than etic traits. Die grinders are thought of as industrial tools, whereas rotary tools are thought of as tools for the residential mass-consumer end-user. There is overlap, though, as many consumers own die grinders, and many industrial users have rotary tools. The distinction is not very significant. Die grinders may feature heavier construction (such as being made of die-cast metal rather than molded plastic) and higher top speeds for the spindle (some can exceed 30,000 RPM unloaded). All modern examples of what people call rotary tools have plastic bodies.

The cutting may be done in various ways, including:

Methods of holding the cutter

The cutter is usually held in a collet, which is a convenient means of chucking in this application and provides the concentricity needed for high-RPM use. It also allows for quick changes in cutters.[1][2] In some applications, other quick-change indexable chucking systems can be used, similar to the indexable chucking types now commonly found on consumer pistol-grip drills.

The most universal safety precaution in die grinder use is to protect one's eyes by wearing safety glasses.

Other common PPE in die grinder use includes:

Safety features built into the tool

Most pneumatic die grinder throttles (also called triggers) feature a spring-loaded "kickstand" mechanism between the throttle lever and the body of the grinder. This prevents the throttle from opening (being pressed down towards the body of the grinder) without operator intervention and inhibits accidental activation. It is similar in principle to the safety catches used on many handguns.

Tools with electric motors often have electrical safety features such as grounded cases (wired to a grounding conductor, which uses the grounding prong on a plug) or double insulation. Some may have both, but more often not, because regulatory requirements require only one or the other.