A miter saw (also spelled mitre) is a saw used to make accurate crosscuts and miters in a workpiece.

The basic miter saw is the manual miter saw. It is a saw suspended on rollers in a metal guide that works with a miter box that allows making accurate crosscuts and miter cuts. They are still used occasionally, such as in picture framing or by manual woodworking enthusiasts, but have largely been displaced by power tools in woodworking. 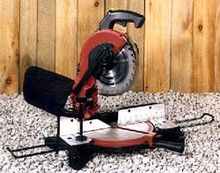 A power miter saw, also known as a chop saw or drop saw, is a power tool used to make a quick, accurate crosscut in a workpiece. Common uses include framing operations and the cutting of molding. Most miter saws are relatively small and portable, with common blade sizes ranging from eight to 12 inches.

The miter saw makes cuts by pulling a spinning circular saw blade down onto a workpiece in a short, controlled motion. The workpiece is typically held against a fence, which provides a precise cutting angle between the blade and the longest workpiece edge. In standard position, this angle is fixed at 90°.

A primary distinguishing feature of the miter saw is the miter index that allows the angle of the blade to be changed relative to the fence. While most miter saws enable precise one-degree incremental changes to the miter index, many also provide "stops" that allow the miter index to be quickly set to common angles (such as 15°, 30°, 45°, or 75°).

There are several types of power miter saws:[1]

A laser guide provides a precise visual indication of where the cut will be positioned on the workpiece in the current configuration. Some models provide a single reference line for one side of the kerf, while others provide two lines to reflect the total kerf width. A blade guard is a cover for the teeth of the cutting blade. Most modern miter saws have self-retracting blade guards, which automatically retract when the saw is lowered onto a workpiece and re-cover the blade when the saw is raised. It is very dangerous to use the saw if these guards are removed or damaged. A dust bag connects directly to the saw, and helps to collect sawdust away from the workpiece during cutting. Optionally, many manufacturers sell adapters to connect a shop-vac in lieu of a bag to capture more of the dust and simplify disposal. Dust removal with these saws is notoriously poor. A safety clamp helps to lock a workpiece into position prior to making a cut. This is an especially important feature when cutting smaller workpieces (eight inches or smaller). The miter table is typically less than 24" in diameter[2]. Typically, the work will need to be supported on the far end to stabilize the piece while cutting[3].

Miter saws are inherently low hazard as the workpiece is held stationary against a fence while the saw head moves, making kick back almost impossible and normally keeping hands clear of the blade. Also the saw head is usually drawn back, then lowered and fed forward through the material so that binding is unlikely.

Sliding compound miter saws are relatively portable, easy to set up, and robust enough to maintain accuracy even when moved around. Because they cut from above it is not necessary to adjust blade depth for different thicknesses of work piece and, like any bench machine, repeat cuts are very easy. Most saws have an adjustable scale plate for table swiveling with positive stops at commonly used angles. Also, there are usually adjustable stops at 90 and 45 degrees for head tilting allowing easy and very accurate adjustment of the saw.

Table swiveling in both directions is universal but most saws only allow head tilting in one direction (counter-clockwise) although some saws allow head tilting in both directions. Normally the work piece is held flat on the table and so table swiveling will produce a miter cut (blade vertical and angled across work piece), head rotation a bevel cut (blade angled from vertical and square across work piece), and in combination a compound cut.

One of the main disadvantages is relatively poor wood chip and dust extraction, since so much of the blade is exposed when cutting, especially bevel cuts, there is a tendency for chips to fly around.

Power miter saws have been available in various forms since the 1970s as specialized cross cut saws but with limited width of cut, especially compared to radial arm saws. Simple miter saws allowed the saw table to pivot allowing miters to be cut in one plane. Compound miter saws also provided saw head tilting allowing compound miters to be cut. Miter saws with abrasive cutting wheels are often used in metal work where they are known as "drop saws" or more commonly "chop saws".

In the late 1980s the sliding compound miter saw was introduced which combined all the best features of the compound miter saw with sliding tubes allowing the cutter head to traverse for a much wider cut. Since then it has become the primary cross cut saw for woodworking, largely supplanting the radial arm saw.