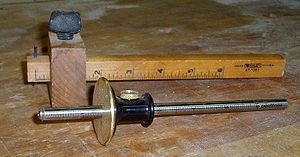 A marking gauge, also known as a scratch gauge,[1] is used in woodworking and metalworking to mark out lines for cutting or other operations.[2] The purpose of the gauge is to scribe a line parallel to a reference edge or surface. It is used in joinery and sheetmetal operations.

The gauge consists of a beam, a headstock, and a scribing or marking implement, typically a pin, knife, pen or wheel. The headstock slides along the beam, and is locked in place by various means: a locking screw, cam lever, or a wedge. The marking implement is fixed to one end of the beam.

The marking implement is chosen depending upon the operation to be performed. Some marking gauges have the capability to allow a number of implements to be fitted, others do not; and a woodworker will often have a number of different types. A steel pin is used when scribing with the grain. A steel knife is used when scribing across the grain. The pen or pencil is used when the woodworker does not wish the surface to be marred. Generally speaking, the pin and knife yield more accurate marking than do the pen or pencil.It is also used to mark parallel lines to the face side and edge side. Panel Gauge- large marking gauge.

The style of gauge which uses a knife instead of a pin is often described as a cutting gauge.

Other variations include a panel gauge which has a longer beam and larger headstock for scribing lines that are further from the reference edge. A mortise gauge has two pins that can be adjusted relative to each other at the end of the beam. This gauge is used to scribe two parallel lines simultaneously and is most commonly used to layout for mortise and tenon joinery.