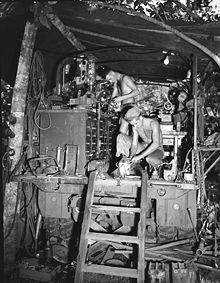 New Guinea in 1943. Mobile Machine Shop truck of the US Army with machinists working on automotive parts.

Conventional machining is a form of subtractive manufacturing, in which a collection of material-working processes utilizing power-driven machine tools, such as saws, lathes, milling machines, and drill presses, are used with a sharp cutting tool to physical remove material to achieve a desired geometry.[1] Machining is a part of the manufacture of many metal products, but it can also be used on materials such as wood, plastic, ceramic, and composites.[2] A person who specializes in machining is called a machinist. A room, building, or company where machining is done is called a machine shop. Machining can be a business, a hobby, or both.[3] Much of modern day machining is carried out by computer numerical control (CNC). Computers are used to control the movement and operation of mills, lathes, and variety of other cutting machines.

The precise meaning of the term "machining" has evolved over the past two centuries as technology has advanced. During the Machine Age, it referred to (what we today might call) the "traditional" machining processes, such as turning, boring, drilling, milling, broaching, sawing, shaping, planing, reaming, and tapping, or grinding.[4] Since the advent of new technologies such as electrical discharge machining, electrochemical machining, electron beam machining, photochemical machining, and ultrasonic machining, the retronym "conventional machining" can be used to differentiate the classic technologies from the newer ones. The term "machining" without qualification usually implies conventional machining and the removal of material. With the recent proliferation of additive manufacturing technologies, conventional machining has been retronymously classified, in thought and language, as a subtractive manufacturing method. In narrow contexts, additive and subtractive methods may compete with each other. In the broad context of entire industries, their relationship is complementary. Each method has its own advantages over the other. While additive manufacturing methods can produce very intricate prototype designs impossible to replicate by machining, strength and material selection maybe limited.[5] With conventional machining, overhead and material cost can be much lower and is often geared toward massproduction.[6][7]

The three principal machining processes are classified as turning, drilling and milling. Other operations falling into miscellaneous categories include shaping, planing, boring, broaching and sawing.[8][9][10]

An unfinished workpiece requiring machining will need to have some material cut away to create a finished product. A finished product would be a workpiece that meets the specifications set out for that workpiece by engineering drawings or blueprints. For example, a workpiece may be required to have a specific outside diameter. A lathe is a machine tool that can be used to create that diameter by rotating a metal workpiece, so that a cutting tool can cut metal away, creating a smooth, round surface matching the required diameter and surface finish. A drill can be used to remove metal in the shape of a cylindrical hole. Other tools that may be used for various types of metal removal are milling machines, saws, and grinding machines. Many of these same techniques are used in woodworking.

As a commercial venture, machining is generally performed in a machine shop, which consists of one or more workrooms containing major machine tools. Although a machine shop can be a stand-alone operation, many businesses maintain internal machine shops which support specialized needs of the business.

Machining requires attention to many details for a workpiece to meet the specifications set out in the engineering drawings or blueprints. Beside the obvious problems related to correct dimensions, there is the problem of achieving the correct finish or surface smoothness on the workpiece. The inferior finish found on the machined surface of a workpiece may be caused by incorrect clamping, a dull tool, or inappropriate presentation of a tool. Frequently, this poor surface finish, known as chatter, is evident by an undulating or irregular finish, and the appearance of waves on the machined surfaces of the workpiece.

By adjusting the offset, a cutting tool of a specific diameter can be used to drill holes of different diameters as illustrated. This implies that the cutting tool inventory can be substantially reduced.

The term orbital drilling comes from that the cutting tool “orbits” around the hole center. The mechanically forced, dynamic offset in orbital drilling has several advantages compared to conventional drilling that drastically increases the hole precision. The lower thrust force results in a burr-less hole when drilling in metals. When drilling in composite materials the problem with delamination is eliminated.[11]

Machining is not just one process; it is a group of processes. The common feature is the use of a cutting tool to form a chip that is removed from the workpart, called swarf. To perform the operation, relative motion is required between the tool and work. This relative motion is achieved in most machining operation by means of a primary motion, called "cutting speed" and a secondary motion called "feed'". The shape of the tool and its penetration into the work surface, combined with these motions, produce the desired shape of the resulting work surface.

There are many kinds of machining operations, each of which is capable of generating a certain part geometry and surface texture.

Drilling is used to create a round hole. It is accomplished by a rotating tool that is typically has two or four cutting edges. The tool is fed in a direction parallel to its axis of rotation into the workpart to form the round hole.

In boring, the tool is used to enlarge an already available hole. It is a fine finishing operation used in the final stages of product manufacture.

In milling, a rotating tool with multiple cutting edges is moved slowly relative to the material to generate a plane or straight surface. The direction of the feed motion is perpendicular to the tool's axis of rotation. The speed motion is provided by the rotating milling cutter. The two basic forms of milling are:

Other conventional machining operations include shaping, planing, broaching and sawing. Also, grinding and similar abrasive operations are often included within the category of machining. 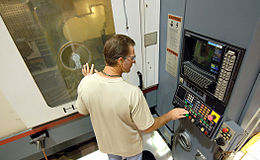 The rake face which directs the flow of newly formed chip, is oriented at a certain angle is called the rake angle "α". It is measured relative to the plane perpendicular to the work surface. The rake angle can be positive or negative. The flank of the tool provides a clearance between the tool and the newly formed work surface, thus protecting the surface from abrasion, which would degrade the finish. This angle between the work surface and the flank surface is called the relief angle. There are two basic types of cutting tools:

A single point tool has one cutting edge and is used for turning, boreing and planing. During machining, the point of the tool penetrates below the original work surface of the workpart. The point is sometimes rounded to a certain radius, called the nose radius.

Relative motion is required between the tool and work to perform a machining operation. The primary motion is accomplished at a certain cutting speed. In addition, the tool must be moved laterally across the work. This is a much slower motion, called the feed. The remaining dimension of the cut is the penetration of the cutting tool below the original work surface, called the depth of cut. Collectively, speed, feed, and depth of cut are called the cutting conditions. They form the three dimensions of the machining process, and for certain operations, their product can be used to obtain the material removal rate for the process:

Note: All units must be converted to the corresponding decimal (or USCU) units.

A cutting fluid is often applied to the machining operation to cool and lubricate the cutting tool. Determining whether a cutting fluid should be used, and, if so, choosing the proper cutting fluid, is usually included within the scope of cutting condition.

Today other forms of metal cutting are becoming increasingly popular. An example of this is water jet cutting. Water jet cutting involves pressurized water in excess of 620 MPa (90 000 psi) and is able to cut metal and have a finished product. This process is called cold cutting, and it increases efficiency as opposed to laser and plasma cutting.

Flórez-Orrego et al.(2010) studied the effect of the variation of cutting parameters in the surface integrity in turning processing of an AISI 304 stainless steel. They found that the feed rate has the greatest impairing effect on the quality of the surface. Besides they found that, more than the achievement of the desired roughness profile, it should be analyized the effect on the creation of micropits and microdefects on the machined surface. Moreover, they found that the convectional empirical relation that relates the feed rate and the roughness value does not fit adequately for low cutting speeds.[1]