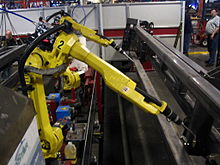 A set of six-axis welding robots.

Fabrication as an industrial term refers to building metal structures by cutting, bending, and assembling. The cutting part of fabrication is via sawing, shearing, or chiseling (all with manual and powered variants); torching with handheld torches (such as oxy-fuel torches or plasma torches); and via CNC cutters (using a laser, torch, or water jet). The bending is via hammering (manual or powered) or via press brakes and similar tools. The assembling (joining of the pieces) is via welding, binding with adhesives, riveting, threaded fasteners, or even yet more bending in the form of a crimped seam. Structural steel and sheet metal are the usual starting materials for fabrication, along with the welding wire, flux, and fasteners that will join the cut pieces. As with other manufacturing processes, both human labor and automation are commonly used. The product resulting from (the process of) fabrication may be called a fabrication. Shops that specialize in this type of metal work are called fab shops. The end products of other common types of metalworking, such as machining, metal stamping, forging, and casting, may be similar in shape and function, but those processes are not classified as fabrication.

Metal fabrication is a value added process that involves the construction of machines and structures from various raw materials. A fab shop will bid on a job, usually based on the engineering drawings, and if awarded the contract will build the product.

Fabrication shops are employed by contractors, OEMs and VARs. Typical projects include; loose parts, structural frames for buildings and heavy equipment, and hand railings and stairs for buildings.

The fabricator may employ or contract out steel detailers to prepare shop drawings, if not provided by the customer, which the fabricating shop will use for manufacturing. Manufacturing engineers will program CNC machines as needed.

The raw material has to be cut to size. This is done with a variety of tools.

The most common way to cut material is by Shearing (metalworking);

Special band saws designed for cutting metal have hardened blades and a feed mechanism for even cutting. Abrasive cut-off saws, also known as chop saws, are similar to miter saws but with a steel cutting abrasive disk. Cutting torches can cut very large sections of steel with little effort.

Burn tables are CNC cutting torches, usually natural gas powered. Plasma and laser cutting tables, and Water jet cutters, are also common. Plate steel is loaded on a table and the parts are cut out as programmed. The support table is made of a grid of bars that can be replaced. Some very expensive burn tables also include CNC punch capability, with a carousel of different punches and taps. Fabrication of structural steel by plasma and laser cutting introduces robots to move the cutting head in three dimensions around the material to be cut.

Hydraulic brake presses with v-dies are the most common method of forming metal. The cut plate is placed in the press and a v-shaped die is pressed a predetermined distance to bend the plate to the desired angle. Wing brakes and hand powered brakes are sometimes used.

Tube bending machines have specially shaped dies and mandrels to bend tubular sections without kinking them.

Rolling machines are used to form plate steel into a round section.

Fab shops will generally have a limited machining capability including; metal lathes, mills, magnetic based drills along with other portable metal working tools.

Welding is the main focus of steel fabrication. The formed and machined parts will be assembled and tack welded into place then re-checked for accuracy. A fixture may be used to locate parts for welding if multiple weldments have been ordered.

The welder then completes welding per the engineering drawings, if welding is detailed, or per his own judgment if no welding details are provided.

Special precautions may be needed to prevent warping of the weldment due to heat. These may include re-designing the weldment to use less weld, welding in a staggered fashion, using a stout fixture, covering the weldment in sand during cooling, and straightening operations after welding.

Straightening of warped steel weldments is done with an Oxy-acetylene torch and is somewhat of an art. Heat is selectively applied to the steel in a slow, linear sweep. The steel will have a net contraction, upon cooling, in the direction of the sweep. A highly skilled welder can remove significant warpage using this technique.

After the weldment has cooled it is generally sand blasted, primed and painted. Any additional manufacturing specified by the customer is then completed. The finished product is then inspected and shipped.

Many fabrication shops have speciality processes which they develop or invest in, based on their customers needs and their expertise:

And higher-level specializations such as: