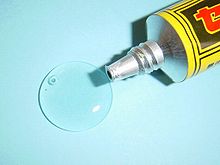 Nitrocellulose adhesive outside a tube

An adhesive, or glue, is a mixture in a liquid or semi-liquid state that adheres or bonds items together. Adhesives may come from either natural or synthetic sources. The types of materials that can be bonded are vast but they are especially useful for bonding thin materials. Adhesives cure (harden) by either evaporating a solvent or by chemical reactions that occur between two or more constituents.[1][2]

Adhesives are advantageous for joining thin or dissimilar materials, minimizing weight, and when a vibration dampening joint is needed.[3] A disadvantage to adhesives is that they do not form an instantaneous joint, unlike most other joining processes, because the adhesive needs time to cure.[4]

The oldest known adhesive, dated to approximately 200,000 BC, is from spear stone flakes glued to a wood with birch-bark-tar, which was found in central Italy.[5] The use of compound glues to haft stone spears into wood dates back to round 70,000 BC. Evidence for this has been found in Sibudu Cave, South Africa and the compound glues used were made from plant gum and red ochre.[6] The Tyrolean Iceman had weapons fixed together with the aid of birch-bark-tar glue.[7]

6000-year-old ceramics show evidence of adhesives based upon animal glues made by rendering animal products such as horse teeth. During the times of Babylonia, tar-like glue was used for gluing statues. The Egyptians made much use of animal glues to adhere furniture, ivory, and papyrus. The Mongols also used adhesives to make their short bows, and the Native Americans of the eastern United States used a mixture of spruce gum and fat as adhesives to fashion waterproof seams in their birchbark canoes.

In medieval Europe, egg whites were used as glue to decorate parchments with gold leaf. The first actual glue factory was founded in Holland in the early 18th century. In the 1750s, the English introduced fish glue. As the modern world evolved, several other patented materials, such as bones, starch, fish skins and isinglass, and casein, were introduced as alternative materials for glue manufacture. Modern glues have improved flexibility, toughness, curing rate, and chemical resistance.

In the late 19th century in Switzerland, casein was first used as a wood glue. Today, it is used to glue grocery bags.[8]

Adhesives are typically organized by the method of adhesion. These are then organized into reactive and non-reactive adhesives, which refers to if the adhesive chemically reacts to harden. Alternatively they can be organized by whether the raw stock is of natural, or synthetic origin, or by their starting physical phase.

Solvent based adhesives are a mixture of ingredients (typically polymers) dissolved in a solvent. White glue, contact adhesives and rubber cements are members of the drying adhesive family. As the solvent evaporates, the adhesive hardens. Depending on the chemical composition of the adhesive, they will adhere to different materials to greater or lesser degrees.

Polymer dispersion adhesives are milky-white dispersions often based on polyvinyl acetate (PVAc). Used extensively in the woodworking and packaging industries. Also used with fabrics and fabric-based components, and in engineered products such as loudspeaker cones.

PSAs are designed for either permanent or removable applications. Examples of permanent applications include safety labels for power equipment, foil tape for HVAC duct work, automotive interior trim assembly, and sound/vibration damping films. Some high performance permanent PSAs exhibit high adhesion values and can support kilograms of weight per square centimeter of contact area, even at elevated temperature. Permanent PSAs may be initially removable (for example to recover mislabeled goods) and build adhesion to a permanent bond after several hours or days.

Pressure sensitive adhesives are manufactured with either a liquid carrier or in 100% solid form. Articles are made from liquid PSAs by coating the adhesive and drying off the solvent or water carrier. They may be further heated to initiate a cross-linking reaction and increase molecular weight. 100% solid PSAs may be low viscosity polymers that are coated and then reacted with radiation to increase molecular weight and form the adhesive; or they may be high viscosity materials that are heated to reduce viscosity enough to allow coating, and then cooled to their final form. Major raw material for PSA's are acrylate based polymers.

Contact adhesives are used in strong bonds with high shear-resistance like laminates, such as bonding Formica to a wooden counter, and in footwear, as in attaching outsoles to uppers.

Natural rubber and polychloroprene (Neoprene) are commonly used contact adhesives. Both of these elastomers undergo strain crystallization. In the construction industry a specialised proprietary adhesive known as Liquid Nails (or liquid nails as the generic), is used.[9] This also copes with tasks such as sealing artificial turf.[10] 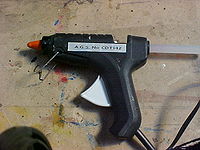 Hot adhesives, also known as hot melt adhesives, are thermoplastics applied in molten form (in the 65-180 °C range) which solidify on cooling to form strong bonds between a wide range of materials. Ethylene-vinyl acetate based hot-melts are particularly popular for crafts because of their ease of use and the wide range of common materials they can join. A glue gun (shown at right) is one method of applying hot adhesives. The glue gun melts the solid adhesive then allows the liquid to pass through its barrel onto the material, where it solidifies.

Thermoplastic glue may have been invented around 1940 by Procter & Gamble as a solution to water-based adhesives commonly used in packaging at that time failing in humid climates, causing packages to open.

There are several commercial combinations of multi - component adhesives in use in industry. Some of these combinations are:

The individual components of a multi-component adhesive are not adhesive by nature. The individual components react with each other after being mixed and show full adhesion only on curing. The multi-component resins can be either solvent-based or solvent-less. The solvents present in the adhesives are a medium for the polyester or the polyurethane resin. The solvent is dried during the curing process.

One-part adhesives harden via a chemical reaction with an external energy source, such as radiation, heat, and moisture.

Heat curing adhesives consist of a pre-made mixture of two or more components. When heat is applied the components react and cross-link. This type of adhesive includes epoxies, urethanes, and polyimides.

Moisture curing adhesives cure when they react with moisture present on the substrate surface or in the air. This type of adhesive includes cyanoacrylates and urethanes.

Natural adhesives are made from organic sources such as vegetable matter, starch (dextrin), natural resins or from animals e.g. casein or animal glue. They are often referred to as bioadhesives. One example is a simple paste made by cooking flour in water. Animal glues are traditionally used in bookbinding, wood joining, and many other areas but now are largely replaced by synthetic glues. Casein are mainly used in glass bottle labelling. Starch based adhesives are used in corrugated board production and paper sack production, paper tube winding, wall paper adhesives. Masonite, a wood hardboard, was bonded using natural lignin, (although most modern MDF particle boards use synthetic thermosetting resins). Another form of natural adhesive is blood albumen (made from protein component of blood), which is used in the plywood industry. Animal glue remains the preferred glue of the luthier. Casein based glues are made by precipitating casein from milk protein using the acetic acid from vinegar. This forms curds, which are neutralized with a base, such as sodium bicarbonate (baking soda), to cause them to unclump and become a thicker plastic-like substance.[8]

Applicators of different adhesives are designed according to the adhesive being used and the size of the area to which the adhesive will be applied. The adhesive is applied to either one or both of the materials being bonded. The pieces are aligned and pressure is added to aid in adhesion and rid the bond of air bubbles.

Common ways of applying an adhesive include brushes, rollers, using films or pellets, spray guns and applicator guns (e.g., caulk gun). All of these can be done manually or can be automated into a machine.

Adhesion, the attachment between adhesive and substrate may occur either by mechanical means, in which the adhesive works its way into small pores of the substrate, or by one of several chemical mechanisms. The strength of adhesion depends on many factors, including the means by which it occurs.

In some cases, an actual chemical bond occurs between adhesive and substrate. In others, electrostatic forces, as in static electricity, hold the substances together. A third mechanism involves the van der Waals forces that develop between molecules. A fourth means involves the moisture-aided diffusion of the glue into the substrate, followed by hardening.

Failure of the adhesive joint 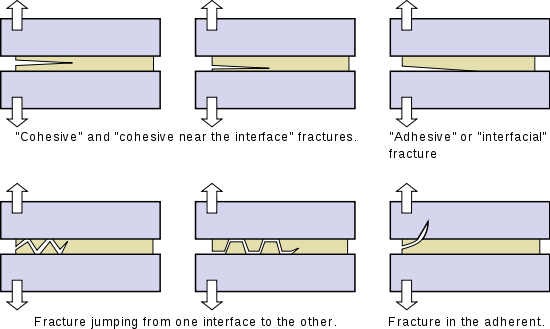 Failure of the adhesive joint can occur in different locations

There are several factors that could contribute to the failure of two adhered surfaces. Sunlight and heat may weaken the adhesive. Solvents can deteriorate or dissolve adhesive. Physical stresses may also cause the separation of surfaces. When subjected to loading, debonding may occur at different locations in the adhesive joint. The major fracture types are the following:

Cohesive fracture is obtained if a crack propagates in the bulk polymer which constitutes the adhesive. In this case the surfaces of both adherents after debonding will be covered by fractured adhesive. The crack may propagate in the centre of the layer or near an interface. For this last case, the cohesive fracture can be said to be “cohesive near the interface”.

The fracture is adhesive or interfacial when debonding occurs between the adhesive and the adherent. In most cases, the occurrence of interfacial fracture for a given adhesive goes along with a smaller fracture toughness. The interfacial character of a fracture surface is usually to identify the precise location of the crack path in the interphase.

Other types of fracture

Other types of fracture include: 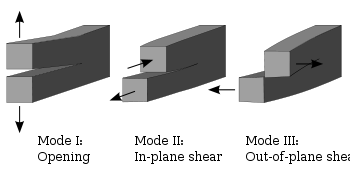 As a general design rule, the material properties of the object need to be greater than the forces anticipated during its use. (i.e. geometry, loads, etc.). The engineering work will consist of having a good model to evaluate the function. For most adhesive joints, this can be achieved using fracture mechanics. Concepts such as the stress concentration factor and the strain energy release rate can be used to predict failure. In such models, the behavior of the adhesive layer itself is neglected and only the adherents are considered.

Failure will also very much depend on the opening mode of the joint.

As the loads are usually fixed, an acceptable design will result from combination of a material selection procedure and geometry modifications, if possible. In adhesively bonded structures, the global geometry and loads are fixed by structural considerations and the design procedure focuses on the material properties of the adhesive and on local changes on the geometry.

Increasing the joint resistance is usually obtained by designing its geometry so that:

Testing the resistance of the adhesive

A wide range of testing devices have been devised to evaluate the fracture resistance of bonded structures in pure mode I, pure mode II or in mixed mode. Most of these devices are beam type specimens. We will very shortly review the most popular: