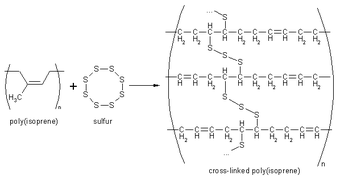 Vulcanization is an example of cross-linking.

Cross-links are bonds that link one polymer chain to another. They can be covalent bonds or ionic bonds. "Polymer chains" can refer to synthetic polymers or natural polymers (such as proteins). When the term "cross-linking" is used in the synthetic polymer science field, it usually refers to the use of cross-links to promote a difference in the polymers' physical properties. When "crosslinking" is used in the biological milieu, it refers to the use of a probe to link proteins together to check for protein–protein interactions, as well as other creative cross-linking methodologies.

Cross-linking is used in both synthetic polymer chemistry and in the biological sciences. Although the term is used to refer to the "linking of polymer chains" for both sciences, the extent of crosslinking and specificities of the crosslinking agents vary. Of course, with all science, there are overlaps, and the following delineations are a starting point to understanding the subtleties.

Cross-links can be formed by chemical reactions that are initiated by heat, pressure, change in pH, or radiation. For example, mixing of an unpolymerized or partially polymerized resin with specific chemicals called crosslinking reagents results in a chemical reaction that forms cross-links. Cross-linking can also be induced in materials that are normally thermoplastic through exposure to a radiation source, such as electron beam exposure[citation needed], gamma-radiation, or UV light. For example, electron beam processing is used to cross-link the C type of cross-linked polyethylene. Other types of cross-linked polyethylene are made by addition of peroxide during extruding (type A) or by addition of a cross-linking agent (e.g. vinylsilane) and a catalyst during extruding and then performing a post-extrusion curing.

The chemical process of vulcanization is a type of cross-linking and it changes the property of rubber to the hard, durable material we associate with car and bike tires. This process is often called sulfur curing, and the term vulcanization comes from Vulcan, the Roman god of fire. However, this is a slow process taking around 8 hours. A typical car tire is cured for 15 minutes at 150°C. However, the time can be reduced by the addition of accelerators such as 2-benzothiazolethiol or tetramethylthiuram disulfide. Both of these contain a sulfur atom in the molecule that initiates the reaction of the sulfur chains with the rubber. Accelerators increase the rate of cure by catalysing the addition of sulfur chains to the rubber molecules.

Cross-links are the characteristic property of thermosetting plastic materials. In most cases, cross-linking is irreversible, and the resulting thermosetting material will degrade or burn if heated, without melting. Especially in the case of commercially used plastics, once a substance is cross-linked, the product is very hard or impossible to recycle. In some cases, though, if the cross-link bonds are sufficiently different, chemically, from the bonds forming the polymers, the process can be reversed. Permanent wave solutions, for example, break and re-form naturally occurring cross-links (disulfide bonds) between protein chains in hair.

Chemical covalent cross-links are stable mechanically and thermally, so once formed are difficult to break. Therefore, cross-linked products like car tires cannot be recycled easily. A class of polymers known as thermoplastic elastomers rely on physical cross-links in their microstructure to achieve stability, and are widely used in non-tire applications, such as snowmobile tracks, and catheters for medical use. They offer a much wider range of properties than conventional cross-linked elastomers because the domains that act as cross-links are reversible, so can be reformed by heat. The stabilising domains may be non-crystalline (as in styrene-butadiene block copolymers) or crystalline as in thermoplastic copolyesters.

Many polymers undergo oxidative cross-linking, typically when exposed to atmospheric oxygen. In some cases this is undesirable and thus polymerization reactions may involve the use of an antioxidant to slow the formation of oxidative cross-links. In other cases, when formation of cross-links by oxidation is desirable, an oxidizer such as hydrogen peroxide may be used to speed up the process.

The aforementioned process of applying a permanent wave to hair is one example of oxidative cross-linking. In that process the disulfide bonds are reduced, typically using a mercaptan such as ammonium thioglycolate. Following this, the hair is curled and then 'neutralized'. The neutralizer is typically a basic solution of hydrogen peroxide, which causes new disulfide bonds to form under conditions of oxidation, thus permanently fixing the hair into its new configuration.

Crosslinks in the biological sciences

In the biological sciences, crosslinking typically refers to a more specific reaction used to probe molecular interactions. For example, proteins (a type of natural polymer) can be cross-linked together using small-molecule crosslinkers. In biological tissue, crosslinks can be induced as disulfide bonds between collagen fibrils. Compromised collagen in the cornea, a condition known as keratoconus, can be treated with clinical crosslinking.[2]

Crosslinker use in protein study

The interactions or mere proximity of proteins can be studied by the clever use of crosslinking agents. For example, protein A and protein B may be very close to each other in a cell, and a chemical crosslinker[3] could be used to probe the protein–protein interaction between these two proteins by linking them together, disrupting the cell, and looking for the crosslinked proteins.

Examples of some common crosslinkers are the imidoester crosslinker dimethyl suberimidate, the N-Hydroxysuccinimide-ester crosslinker BS3 and formaldehyde. Each of these crosslinkers induces nucleophilic attack of the amino group of lysine and subsequent covalent bonding via the crosslinker. The zero-length carbodiimide crosslinker EDC functions by converting carboxyls into amine-reactive isourea intermediates that bind to lysine residues or other available primary amines. SMCC or its water-soluble analog, Sulfo-SMCC, is commonly used to prepare antibody-hapten conjugates for antibody development.

In-vivo crosslinking of protein complexes using photo-reactive amino acid analogs was introduced in 2005 by researchers from the Max Planck Institute[4] In this method, cells are grown with photoreactive diazirine analogs to leucine and methionine, which are incorporated into proteins. Upon exposure to ultraviolet light, the diazirines are activated and bind to interacting proteins that are within a few ångströms of the photo-reactive amino acid analog (UV cross-linking).

Synthetically crosslinked polymers have many uses, including those in the biological sciences, such as applications in forming polyacrylamide gels for gel electrophoresis. Synthetic rubber used for tires is made by crosslinking rubber through the process of vulcanization. Also most rubber articles are cross-linked to make them more elastic. Hard-shell kayaks are also often manufactured with crosslinked polymers.