Resin
Not to be confused with rosin, a particular type of resin.
This article is about the plant secretion. For other uses, see Resin (disambiguation). 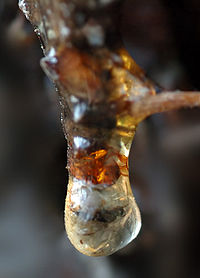 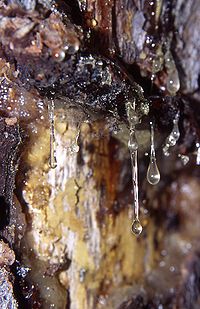 Resin of a pine

Resin in the most specific use of the term is a hydrocarbon secretion of many plants, particularly coniferous trees. It is valued for its chemical properties and associated uses, such as the production of varnishes, adhesives, and food glazing agents; as an important source of raw materials for organic synthesis; and as constituents of incense and perfume. Plant resins have a very long history that was documented in ancient Greece by Theophrastus, in ancient Rome by Pliny the Elder, and especially in the resins known as frankincense and myrrh, prized in ancient Egypt.[1] These were highly prized substances, and required as incense in some religious rites. Amber is a hard fossilized resin from ancient trees.

More broadly, the term "resin" also encompasses a great many synthetic substances of similar mechanical properties (thick liquids that harden into transparent solids), as well as shellacs of insects of the superfamily Coccoidea.

Other liquid compounds found in plants or exuded by plants, such as sap, latex, or mucilage, are sometimes confused with resin, but are not chemically the same. Saps, in particular, serve a nutritive function that resins do not. There is no consensus on why plants secrete resins. However, resins consist primarily of secondary metabolites or compounds that apparently play no role in the primary physiology of a plant. While some scientists view resins only as waste products, their protective benefits to the plant are widely documented. The toxic resinous compounds may confound a wide range of herbivores, insects, and pathogens; while the volatile phenolic compounds may attract benefactors such as parasitoids or predators of the herbivores that attack the plant.[2]

The word "resin" has been applied in the modern world to nearly any component of a liquid that will set into a hard lacquer or enamel-like finish. An example is nail polish, a modern product which contains "resins" that are organic compounds, but not classical plant resins. Certain "casting resins" and synthetic resins (such as epoxy resin) have also been given the name "resin" because they solidify in the same way as (some) plant resins, but synthetic resins are liquid monomers of thermosetting plastics, and do not derive from plants. 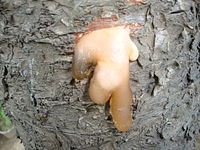 Extremely viscous resin extruding from the trunk of a mature Araucaria columnaris.

The resin produced by most plants is a viscous liquid, composed mainly of volatile fluid terpenes, with lesser components of dissolved non-volatile solids which make resin thick and sticky. The most common terpenes in resin are the bicyclic terpenes alpha-pinene, beta-pinene, delta-3 carene and sabinene, the monocyclic terpenes limonene and terpinolene, and smaller amounts of the tricyclic sesquiterpenes, longifolene, caryophyllene and delta-cadinene. Some resins also contain a high proportion of resin acids. The individual components of resin can be separated by fractional distillation.

A few plants produce resins with different compositions, most notably Jeffrey Pine and Gray Pine, the volatile components of which are largely pure n-heptane with little or no terpenes. The exceptional purity of the n-heptane distilled from Jeffrey Pine resin, unmixed with other isomers of heptane, led to its being used as the defining zero point on the octane rating scale of petrol quality. Because heptane is highly flammable, distillation of resins containing it is very dangerous. Some resin distilleries in California exploded because they mistook Jeffrey Pine for the similar but terpene-producing Ponderosa Pine. At the time the two pines were considered to be the same species of pine; they were only classified as separate species in 1853.

Some resins when soft are known as 'oleoresins', and when containing benzoic acid or cinnamic acid they are called balsams. Other resinous products in their natural condition are a mix with gum or mucilaginous substances and known as gum resins. Many compound resins have distinct and characteristic odors, from their admixture with essential oils.

Certain resins are obtained in a fossilized condition, amber being the most notable instance of this class; African copal and the kauri gum of New Zealand are also procured in a semi-fossil condition. 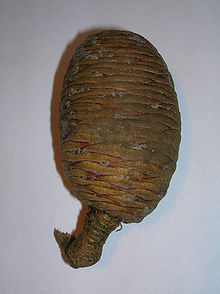 Cedar of Lebanon pine cone showing flecks of resin as used in the mummification of Egyptian Pharaohs.

Solidified resin from which the volatile terpene components have been removed by distillation is known as rosin. Typical rosin is a transparent or translucent mass, with a vitreous fracture and a faintly yellow or brown colour, non-odorous or having only a slight turpentine odour and taste.

It is insoluble in water, mostly soluble in alcohol, essential oils, ether and hot fatty oils, and softens and melts under the influence of heat, is not capable of sublimation, and burns with a bright but smoky flame.

This comprises a complex mixture of different substances including organic acids named the resin acids. These are closely related to the terpenes, and derive from them through partial oxidation. Resin acids can be dissolved in alkalis to form resin soaps, from which the purified resin acids are regenerated by treatment with acids. Examples of resin acids are abietic acid (sylvic acid), C20H30O2, plicatic acid contained in cedar, and pimaric acid, C20H35O2, a constituent of galipot resin. Abietic acid can also be extracted from rosin by means of hot alcohol; it crystallizes in leaflets, and on oxidation yields trimellitic acid, isophthalic acid and terebic acid. Pimaric acid closely resembles abietic acid into which it passes when distilled in a vacuum; it has been supposed to consist of three isomers. 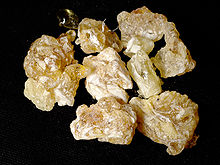 The hard transparent resins, such as the copals, dammars, mastic and sandarac, are principally used for varnishes and cement, while the softer odoriferous oleo-resins (frankincense, elemi, turpentine, copaiba) and gum resins containing essential oils (ammoniacum, asafoetida, gamboge, myrrh, and scammony) are more largely used for therapeutic purposes and incense.

Resin in the form of rosin is applied to the bows of stringed instruments (e.g. violin, rebec, erhu, sarangi, etc.), because of its quality for adding friction to the hair. Ballet dancers may apply crushed rosin to their shoes to increase grip on a slippery floor.

Resin has also been used as a medium for sculpture by artists such as Eva Hesse, and in other types of artwork.

In the early 1990s, most ten-pin bowling ball manufacturers started adding resin particles to the covers of bowling balls. Resin makes a bowling ball tackier than it would otherwise be, increasing its ability to hook into the pins at an angle and (with correct technique) making strikes easier to achieve.[citation needed]