Commiphora myrrha tree, one of the primary trees from which myrrh is harvested.

When a tree wound penetrates through the bark and into the sapwood, the tree bleeds a resin. Myrrh gum, like frankincense, is such a resin. When people harvest myrrh, they wound the trees repeatedly to bleed them of the gum. Myrrh gum is waxy, and coagulates quickly. After the harvest, the gum becomes hard and glossy. The gum is yellowish, and may be either clear or opaque. It darkens deeply as it ages, and white streaks emerge.[2]

Myrrh gum is commonly harvested from the species Commiphora myrrha, which is native to Yemen, Somalia, and eastern Ethiopia. Another farmed species is C. momol.[3] The related Commiphora gileadensis, native to Eastern Mediterranean and particularly the Arabian Peninsula,[4] is the biblically referenced Balm of Gilead.[5] Several other species yield bdellium, and Indian myrrh.

The oleo gum resins of a number of other Commiphora and Balsamodendron species are also used as perfumes, medicines (such as aromatic wound dressings), and incense ingredients. A lesser quality myrrh is bled from the tree Commiphora erythraea. Commiphora opobalsamum oleo gum resin is known as Opopinax, a name it shares with the gum resin bled from a species of parsnip, Pastincea opobalsamum.

Fragrant "myrrh beads" are made from the crushed seeds of Detarium microcarpum, an unrelated West African tree. These beads are traditionally worn by married women in Mali as multiple strands around the hips.

The name "myrrh" is also applied to the potherb Myrrhis odorata, otherwise known as "cicely" or "sweet cicely".

The word "myrrh" derives from the Aramaic ܡܪܝܪܐ (murr), meaning "was bitter". Its name entered the English language from the Hebrew Bible, where it is called mor, מור, and later as a Semitic loanword[6] was used in the Greek myth of Myrrha, and later in the Septuagint; in the Greek language, the related word μύρον became a general term for perfume.

So valuable has it been at times in ancient history that it has been equal in weight value to gold. During times of scarcity, its value rose even higher than that.[citation needed] It has been used throughout history as a perfume, incense and medicine. 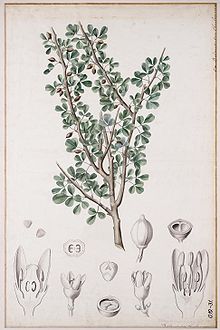 In traditional Chinese medicine, myrrh is classified as bitter and spicy, with a neutral temperature. It is said to have special efficacy on the heart, liver, and spleen meridians, as well as "blood-moving" powers to purge stagnant blood from the uterus. It is therefore recommended for rheumatic, arthritic, and circulatory problems, and for amenorrhea, dysmenorrhea, menopause, and uterine tumors.

Its uses are similar to those of frankincense, with which it is often combined in decoctions, liniments, and incense. When used in concert, myrrh is "blood-moving" while frankincense moves the Qi, making it more useful for arthritic conditions.

It is combined with such herbs as notoginseng, safflower stamens, Angelica sinensis, cinnamon, and Salvia miltiorrhiza, usually in alcohol, and used both internally and externally.[7]

Myrrh is used more frequently in Ayurveda and Unani medicine, which ascribe tonic and rejuvenative properties to the resin.

Myrrh (daindhava) is used in many specially-processed rasayana formulas in Ayurveda. However, non-rasayana myrrh is contraindicated when kidney dysfunction or stomach pain is apparent, or for women who are pregnant or have excessive uterine bleeding.

A related species, called guggul in Ayurvedic medicine, is considered one of the best substances for the treatment of circulatory problems, nervous system disorders and rheumatic complaints.[8][9] 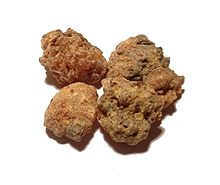 Myrrh is a common resin in the Horn of Africa.

In pharmacy, myrrh is used as an antiseptic in mouthwashes, gargles, and toothpastes[10] for prevention and treatment of gum disease.[11] Myrrh is currently used in some liniments and healing salves that may be applied to abrasions and other minor skin ailments. Myrrh has also been recommended as an analgesic for toothaches, and can be used in liniment for bruises, aches, and sprains.[12]

In an attempt to determine the cause of its effectiveness, researchers examined the individual ingredients of an herbal formula used traditionally by Kuwaiti diabetics to lower blood glucose. Myrrh and aloe gums effectively improved glucose tolerance in both normal and diabetic rats.[13]

Myrrh was shown[14] to produce analgesic effects on mice which were subjected to pain. Researchers at the University of Florence showed that furanoeudesma-1,3-diene and another terpene in the myrrh affect opioid receptors in the mouse's brain which influence pain perception.

Mirazid, an Egyptian drug made from myrrh, has been investigated as an oral treatment of parasitic ailments, including fascioliasis and schistosomiasis.[15]

Myrrh has been shown to lower cholesterol LDL (bad cholesterol) levels, as well as to increase the HDL (good cholesterol) in various tests on humans done in the past few decades. One recent (2009) documented laboratory test showed this same effect on albino rats.[16]

Myrrh was used by the ancient Egyptians, along with natron, for the embalming of mummies.[17]

Myrrh was a part of the Ketoret, which is used when referring to the consecrated incense described in the Hebrew Bible and Talmud. It is also referred to as the HaKetoret (the incense). It was offered on the specialized incense altar in the time when the Tabernacle was located in the First and Second Jerusalem Temples. The ketoret was an important component of the Temple service in Jerusalem.

It was traded by camel caravans overland from areas of production in southern Arabia by the Nabataeans to their capital city of Petra, from where it was distributed throughout the Mediterranean region.[18]

According to the book of Matthew 2:11, gold, frankincense and myrrh were among the gifts to Jesus by the Biblical Magi "from the East."

"While burning incense was accepted as a practice in the later Roman Catholic church, the early church during Roman times forbade the use of incense in services resulting in a rapid decline in the incense trade."[19]

Because of its New Testament significance, myrrh is a common ingredient in incense offered during Christian liturgical celebrations (see Thurible).

In Roman Catholic liturgical tradition, pellets of myrrh are traditionally placed in the Paschal candle during the Easter Vigil. Eastern Christianity uses incense much more frequently, sometimes emphasizing its use at Vespers and Matins because of the Old Testament exhortation of the evening and morning offerings of incense.

Myrrh is also used to prepare the sacramental chrism used by many churches of both Eastern and Western rites. In the Middle East, the Eastern Orthodox Church traditionally uses myrrh-scented oil to perform the sacraments of chrismation and unction, both of which are commonly referred to as "receiving the Chrism".

Myrrh is also used in Neo-paganism and Ritual Magick.