Isomer
This article is about the chemical concept. For "isomerism" of atomic nuclei, see nuclear isomer.

In chemistry, isomers (from Greek ἰσομερής, isomerès; isos = "equal", méros = "part") are compounds with the same molecular formula but different structural formulas.[1] Isomers do not necessarily share similar properties, unless they also have the same functional groups. There are many different classes of isomers, like stereoisomers, enantiomers, geometrical isomers, etc. (see chart below). There are two main forms of isomerism: structural isomerism and stereoisomerism (spatial isomerism). 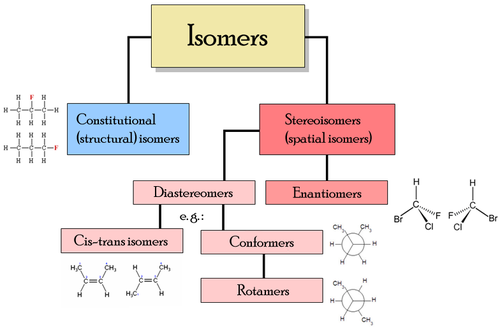 In skeletal isomers the main carbon chain is different between the two isomers. This type of isomerism is most identifiable in secondary and tertiary alcohol isomers.

Tautomers are structural isomers of the same chemical substance that spontaneously interconvert with each other, even when pure. They have different chemical properties, and consequently, distinct reactions characteristic to each form are observed. If the interconversion reaction is fast enough, tautomers cannot be isolated from each other. An example is when they differ by the position of a proton, such as in keto/enol tautomerism, where the proton is alternately on the carbon or oxygen.

In stereoisomers the bond structure is the same, but the geometrical positioning of atoms and functional groups in space differs. This class includes enantiomers where different isomers are non-superimposable mirror-images of each other, and diastereomers when they are not.

Diastereomerism is again subdivided into "cis-trans isomers", which have restricted rotation within the molecule (typically isomers containing a double bond) and "conformational isomers" (conformers), which can rotate about one or more single bonds within the molecule.

In octahedral coordination compounds, facial-meridional isomerism occurs. The isomers can be fac- (with facial ligands) or mer- (with meridional ligands).

Note that although conformers can be referred to as stereoisomers, they are not stable isomers, since bonds in conformers can easily rotate thus converting one conformer to another which can be either diastereomeric or enantiomeric to the original one.

While structural isomers typically have different chemical properties, stereoisomers behave identically in most chemical reactions, except in their reaction with other stereoisomers. Enzymes however can distinguish between different enantiomers of a compound, and organisms often prefer one isomer over the other. Some stereoisomers also differ in the way they rotate polarized light.

Isomerisation is the process by which one molecule is transformed into another molecule which has exactly the same atoms, but the atoms are rearranged[5]. In some molecules and under some conditions, isomerisation occurs spontaneously. Many isomers are equal or roughly equal in bond energy, and so exist in roughly equal amounts, provided that they can interconvert relatively freely, that is the energy barrier between the two isomers is not too high. When the isomerisation occurs intramolecularly it is considered a rearrangement reaction.

An example of an organometallic isomerisation is the production of decaphenylferrocene, [(η5-C5Ph5)2Fe] from its linkage isomer.[6][7]

A simple example of isomerism is given by propanol: it has the formula C3H8O (or C3H7OH) and occurs as two isomers: propan-1-ol (n-propyl alcohol; I) and propan-2-ol (isopropyl alcohol; II)

Note that the position of the oxygen atom differs between the two: it is attached to an end carbon in the first isomer, and to the center carbon in the second.

There is, however, another isomer of C3H8O which has significantly different properties: methoxyethane (methyl-ethyl-ether; III). Unlike the isomers of propanol, methoxyethane has an oxygen connected to two carbons rather than to one carbon and one hydrogen. This makes it an ether, not an alcohol, as it lacks a hydroxyl group, and has chemical properties more similar to other ethers than to either of the above alcohol isomers.

Examples of isomers having different medical properties can be easily found. For example, in the placement of methyl groups. In substituted xanthines, Theobromine, found in chocolate, is a vasodilator with some effects in common with caffeine, but if one of the two methyl groups is moved to a different position on the two-ring core, the isomer is theophylline, which has a variety of effects, including bronchodilation and anti-inflammatory action. Another example of this occurs in the phenethylamine-based stimulant drugs. Phentermine is a non-chiral compound with a weaker effect than amphetamine. It is used as an appetite reducing medication and has mild or no stimulant properties. However, a different atomic arrangement gives dextromethamphetamine which is a stronger stimulant than amphetamine.

Industrial synthesis of fumaric acid proceeds via the cis-trans isomerization of maleic acid:

In medicinal chemistry and biochemistry, enantiomers are a special concern because they may possess quite different biological activity. The infamous case of thalidomide arose from the effects of the unwanted enantiomer. Many preparative procedure afford a mixture of equal amounts of both enantiomeric forms. In some cases, the enantiomers are separated by chromatography using chiral stationary phases. In other cases, enantioselective syntheses have been developed.

Isomerism was first noticed in 1827, when Friedrich Woehler prepared cyanic acid and noted that although its elemental composition was identical to fulminic acid (prepared by Justus von Liebig the previous year), its properties were quite different. This finding challenged the prevailing chemical understanding of the time, which held that chemical compounds could be different only when they had different elemental compositions. After additional discoveries of the same sort were made, such as Woehler's 1828 discovery that urea had the same atomic composition as the chemically distinct ammonium cyanate, Jöns Jakob Berzelius introduced the term isomerism in 1830 to describe the phenomenon.[11]

In 1848, Louis Pasteur separated tiny crystals of tartaric acid into their two mirror-image forms.[12][13] The individual molecules of each were the left and right optical stereoisomers, solutions of which rotate the plane of polarized light to the same degree but in opposite directions.

Other types of isomerism

Other types of isomerism exist outside this scope. Topological isomers called topoisomers are generally large molecules that wind about and form different shaped knots or loops. Molecules with topoisomers include catenanes and DNA. Topoisomerase enzymes can knot DNA and thus change its topology. There are also isotopomers or isotopic isomers that have the same numbers of each type of isotopic substitution but in chemically different positions. In nuclear physics, nuclear isomers are excited states of atomic nuclei. Spin isomers have differing distributions of spin among their constituent atoms.