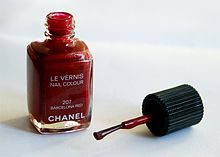 Nail polish is a lacquer applied to toenails and or fingernails for appearance, and also as nail protection. It usually comes in different colors.

In ancient Egypt, women used nail color to signify social order with shades of red at the top. Queen Nefertiti, the wife of King Akhenaton, colored her fingernails and toenails ruby red; Cleopatra favored crimson. Women of lower rank who colored their nails were permitted only pale colors.

The Chinese used a colored lacquer, made from gum arabic, egg whites, gelatin and beeswax. They used mashed rose, orchid and impatiens petals combined with alum. This mixture applied to nails for a few hours, leaves a color ranging from pink to red. In the Chou Dynasty of 600 BC, Chinese royalty used gold and silver to enhance their nails. A 15th century Ming manuscript cites red and black as the colors chosen by royalty for previous centuries.[citation needed]

The Incas decorated their fingernails with pictures of eagles, but it is unclear how the practice of coloring nails progressed following these beginnings. Portraits from the 17th and 18th centuries include shiny nails.[1]

By the turn of the 19th century, nails were tinted with scented red oils, and polished or buffed with a chamois cloth, rather than simply polished.[2] English and US 19th century cookbooks had directions for making nail paints. In the 19th and early 20th centuries, women pursued a polished, rather than painted, look by massaging tinted powders and creams into their nails, then buffing them shiny.[2] One such polishing product sold around this time was Graf's Hyglo nail polish paste.[2] Some women during this period painted their nails with clear, glossy varnish applied with a camel-hair brush.[2] When automobile paint was created around 1920, it inspired the introduction of colored nail glosses.[2] 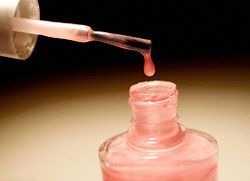 Most nail polishes are made of nitrocellulose dissolved in a solvent (e.g. butyl acetate or ethyl acetate) and either left clear or colored with various pigments. Basic components included are: film forming agents, resins and plasticizers, solvents, and coloring agents. Adhesive polymers (e.g. tosylamide-formaldehyde resin) ensure that the nitrocellulose adheres to the nail's surface. Plasticizers (e.g. camphor) are chemicals that link between polymer chains, spacing them to make the film sufficiently flexible after drying. Pigments and sparkling particles (e.g. mica) add desired color and reflecting characteristics. Thickening agents (e.g. stearalkonium hectorite) are added to maintain the sparkling particles in suspension while in the bottle. Ultraviolet stabilizers (e.g. benozophenone-1) resist color changes when the dry film is exposed to direct sunlight. Nail polish ingredients often include toluene. Solvents such as toluene and xylene are petroleum-based products that have been linked to cancer. Formaldehyde (formalin) may cause allergic reactions and is unsafe for use by asthmatic people. It is a carcinogen.

Nail polish makers are under pressure to reduce or eliminate toxic ingredients, including phthalates, toluene, and formaldehyde.[3][4] In September 2006, several makers agreed to phase out dibutyl phthalate, which has been linked to testicular problems in lab animals and humans, in updated formulations.[4] Some makers eliminated formaldehyde from their products, others still use it.[3]

A recent development (ca. 2003) is water-based nail polish, which is based on an acrylic polymer emulsion (e.g. styrene-acrylate copolymer), and pigments similar to those used in watercolor paints.[citation needed] This is marketed as an environmentally-conscious product, since nail polish is considered a hazardous waste by some regulatory bodies (e.g. Los Angeles Department of Public Works).[5] In this application, the solvent (water) does not completely evaporate as in the case of the traditional nail polish; part of the water is absorbed through the fingernail.

Some companies offer water-based, non-toxic nail polish that is also gluten-free.[6][7] Nail polishes have recently been developed without some of the most harmful chemicals such as formaldehyde, toluene, and dibutyl phthalate.

Nail polish has been traditionally worn by women, but has recently become more popular with men.[citation needed] Traditional colors for nail polish were red, pink and brown, and it can now be found in virtually any color. French manicures traditionally mimic the color of natural nails, using a clear, beige or soft pink polish on most of the nail with a white finish at the tips.

Black has been a popular color of nail polish with goths, Emo and punks of all genders since the 1970s, and has recently gained acceptance as a color for both men and women.

Some types of polish are advertised to cause nail growth, make nails stronger, prevent nails from breaking, cracking and splitting and stop nail biting. Nail polish may be applied as one of several components in a manicure.

Nail polish is easily removed with nail polish remover, which is an organic solvent, but may also include oils, scents and coloring. Nail polish remover packages may include individual felt pads soaked in remover, a bottle of liquid remover that can be used with a cotton ball or cotton pad, and even containers filled with foam that can be used by inserting a finger into the container and twisting until the polish comes off.

The most common type of nail polish remover contains acetone. It is powerful and effective, but is harsh on skin and nails, and can even make them more brittle.[citation needed] Acetone is considered a volatile organic compound by the U.S. Environmental Protection Agency.[8] It can also be used to remove artificial nails, which are usually made of acrylic.

The common alternative is simply called "non-acetone nail polish remover", and usually contains ethyl acetate. This is a less aggressive solvent and can therefore be used to remove nail polish from artificial nails.

Acetonitrile has been used as a nail polish remover, but is thought to be more toxic and has been banned in the European Economic Area for cosmetics, since 17 March 2000.[9][clarification needed]

Nail polish remover can come in bottles, pads or wipes soaked in the solution, or even in a foam sponge.