Ochre
This article is about a color and its pigment. For other uses, see Ochre (disambiguation).
"Red ocher" redirects here. For the indigenous people of North America, see Red Ocher people.

/ˈoʊkər/ oh-kər; from Greek: ὠχρός, ōkhrós, pale) is the term for both a golden-yellow or light yellow brown color and for a form of earth pigment which produces the color. The pigment can also be used to create a reddish tint known as "red ochre". The more rarely used terms "purple ochre" and "brown ochre" also exist for variant hues. Because of these other hues, the color ochre is sometimes referred to as "yellow ochre" or "gold ochre".

Ochres are among the earliest pigments used by mankind, derived from naturally tinted clay containing mineral oxides. Chemically, it is hydrated iron (III) oxide. Modern artists' pigments continue to use the terms "yellow ochre" and "red ochre" for specific hues.

Ochre clays have been used medicinally from the earliest times. For example, such use is described in the Ebers Papyrus from Egypt, dating to about 1550 BC. 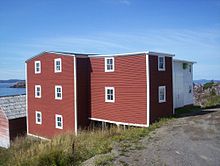 Ochres are non-toxic, and can be used to make an oil paint that dries quickly and covers surfaces thoroughly. To manufacture ground ochre, ochre clay is first mined from the ground. It is then washed in order to separate sand from ochre, which can be done by hand. The remaining ochre is then dried in the sun and sometimes burned to enhance the natural color.

As a painting pigment, it exists in at least four forms: 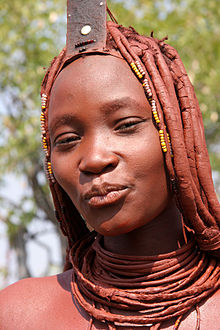 They are found throughout the world in many shades. Many sources consider the best brown ochre to come from Cyprus, and the best yellow and red ochre from Roussillon, France. All have been used since prehistoric times.

The earliest potential evidence for complex human culture comes from the site of Blombos Cave in South Africa, where two pieces of ochre engraved with abstract designs have been found, often considered to be the world's first known art, along with shells pierced for use as jewelry and a complex toolkit including finely crafted bone tools. The ensemble is dated to around 75,000 years ago. Another discovery at the same location is 100,000 years old [1]. It has been suggested that the presence of complex culture indicates the use of modern human language.[2] A report published in 2009 on an additional thirteen pieces of ochre states that the results "suggest that symbolic intent and tradition were present in this region at an earlier date than previously thought."[3] An anthropologist studying another South African cave has called for further studies to ensure that the incisions were deliberate and not the result of an attempt to remove ochre powder from the stones.[4]

The use of ochre in Australia also has a long history. Ochre has been used for millennia by Aboriginal people in body decoration, mortuary practices, cave painting, bark painting and other artwork, and the preservation of animal skins, among other uses. At Lake Mungo, in Western New South Wales, burial sites have been excavated and burial materials, including ochre-painted bones, have been carbon-dated to 62,000 years, although some archaeologists believe human occupation of Australia dates no further back than 45,000 years.[5] Red, yellow and white ochres are plentiful across Australia, especially the Western Desert, Kimberley and Arnhem Land regions, and occur in many archaeological sites.[6] The National Museum of Australia has a large collection of samples of ochre from many sites across Australia. [7]

However, the archaeological literature is not consistent in the use of the word 'ochre', at times using it to refer to any red deposit and the distinction between ochre and umber can also be contentious.[8] Ochre pigments were used by the Cro-Magnon [9] artists who painted the pre-historic cave paintings in southern Europe between 32,000 and 10,000 years ago.

It has been argued that Neolithic burials used red ochre pigments symbolically, either to represent a return to the earth or possibly as a form of ritual rebirth, in which the color symbolizes blood and the Great Goddess.[10]

In Germanic rune lore, red ochre was often used in place of blood to redden, or tint, the runes and thereby instilling the spirit of life into the rune, enabling it to be used for magical purposes.[citation needed]

Early historical records suggest the use of ochre as a pigment by numerous cultures. The Ancient Picts were said to paint themselves "Iron Red" according to the Gothic historian Jordanes. Frequent references in Irish myth to "red men" (Gaelic: Fer Dearg) make it likely that such a practice was common to the Celts of the British Isles, bog iron being particularly abundant in the midlands of Ireland.

In Newfoundland[11] its use is most often associated with the Beothuk, whose use of red ochre led them to be referred to as "Red Indians" by the first Europeans to Newfoundland.[12] It was also used by the Maritime Archaic as evidenced by its discovery in the graves of over 100 individuals during an archaeological excavation at Port au Choix. California Native Americans such as the Chumash were known to use red ochre as body paint.[13]

In ancient Egypt red ochre was used as a rouge, or lip gloss for women.[14]

Ochre in its various permutations was the most commonly used material for painting walls in the ancient Mediterranean world. In Ancient Greece, red ochre was called μίλτος, míltos (hence Miltiades, red-haired or ruddy). In Athens when Assembly was called, a contingent of public slaves would sweep the open space of the Agora with ropes dipped in miltos: those citizens that loitered there instead of moving to the Assembly area would risk having their clothes stained with the paint. This prevented them from wearing these clothes in public again, as failure to attend the Assembly incurred a fine.

The Maori people of New Zealand were in the early neolithic period of development when Europeans arrived, and were found to be making extensive use of mineral ochre mixed with fish oil. Ochre was the predominant coloring agent used by Maori, and was used to paint their large waka taua (war canoe). Ochre prevented the drying out of the wood in canoes and the carvings of meeting houses; later missionaries estimated that it would last for 30 years. It was also roughly smeared over the face, especially by women, to keep off insects. Solid chunks of ochre were ground on a flat but rough surfaced rock to produce the powder. When Captain James Cook visited the Bay of Islands in northern New Zealand, Maori who came on board his ship could not resist stealing large containers of red paint. Marines shot and killed the thieves as they paddled off in their waka.

When the mineral was found in Brixham England, it became a very important part of the developing fishing industry. This gave the old fishing boats their "Red Sails in the Sunset", but the purpose was to protect the canvas from seawater, not to be picturesque. It was boiled in great caldrons, together with tar, tallow and oak bark, the last ingredient giving the name of barking yards to the places where the hot mixture was painted on to the sails, which were then hung up to dry.

Ochre was a popular coloring in France during the time of the French Empire, and many French citizens living in foreign colonies would import a great deal of ochre clay from France to make their new lands feel like home. As a result, after the period of French colonization ended, ochre became associated with repression and fell out of favor. With the advent of synthetic dyes, ochre mining nearly stopped altogether. Recently, however, natural ochre paint has seen something of a comeback as an upscale house paint option.

In Newfoundland, red ochre was the pigment of choice for use in vernacular outbuildings and work buildings associated with the cod fishery. Deposits of ochre are found throughout Newfoundland, notably near Fortune Harbor and at Ocher Pit Cove. While earliest settlers may have used locally collected ochre, people were later able to purchase pre-ground ochre through local merchants, largely imported from England.

The dry ingredient, ochre, was mixed with some type of liquid raw material to create a rough paint. The liquid material was usually seal oil or cod liver oil in Newfoundland and Labrador, while Scandinavian recipes sometimes called for linseed oil. Red ochre paint was sometimes prepared months in advance and allowed to sit, and the smell of ochre paint being prepared is still remembered by many today.

Variations in local recipes, shades of ore, and type of oil used resulted in regional variations in color. Because of this, it is difficult to pinpoint an exact shade or hue or red that would be considered the traditional “fishing stage red”. Oral tradition in the Bonavista Bay area maintains that seal oil would give a purer red color, while cod liver oil would give a “foxy” color, browner in hue.

Women of the Himba tribe in Namibia are famous for using a mix of ochre and animal fat for body decoration, to achieve a beautiful reddish skin color. The ochre mixture is also applied to their hair after braiding.[15]