Brown
This article is about the color. For other uses, see Brown (disambiguation).

Brown is a color term, denoting a range of composite colors produced by a mixture of orange, red, rose, or yellow with black or gray. The term is from Old English brún, in origin for any dusky or dark shade of color.[1] The Common Germanic adjective *brûnoz, *brûnâ meant both dark colors and a glistening or shining quality, whence burnish. The current meaning developed in Middle English from the 14th century.[2] 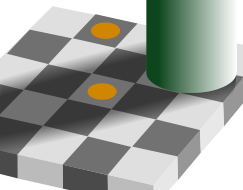 The brown and orange disks of color are objectively identical, in identical gray surrounds, in this image; their perceived color categories depend on what white they are compared to.[citation needed]

As a color of low intensity, brown is a tertiary color: a mix of the three subtractive primary colors is brown if the cyan content is low. Brown exists as a color perception only in the presence of a brighter color contrast:[citation needed] yellow, orange, red, or rose objects are still perceived as such if the general illumination level is low, despite reflecting the same amount of red or orange light as a brown object would in normal lighting conditions.

The first recorded use of brown as a color name in English was in 1000.[5]

The web color called "brown" is displayed at right.

The historical and traditional name for this color is red-brown.

The color shown above at the top right at the head of this article (color #964B00) is the color normally and traditionally regarded as brown--a medium dark orange. Its h (hue) code is 30, which signifies a shade of orange. The color to the immediate right (color #A52A2A) that was chosen as the web color "brown"--a medium dark red—is the color traditionally called red-brown. That this color is a shade of red and not orange can be easily ascertained by inspecting its h (hue) code, which is 0, signifying a shade of red.

The first recorded use of red-brown as a color name in English was in 1682.[7]

Displayed at right is the web color rosy brown.

The color name rosy brown first came into use in 1987, when this color was formulated as one of the X11 colors, which in the early 1990s became known as the X11 web colors. 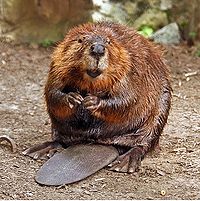 Beaver is a color that is a representation of the average color of the fur of a beaver.

The color "beaver" was formulated as one of the Crayola colors in 1998.

Displayed at right is the color chestnut, also known as the web color Indian red.

Chestnuts can be found on the ground around chestnut trees.

Russet is a dark brown color with a reddish-orange tinge.

The name of the color derives from russet, a coarse cloth made of wool and dyed with woad and madder to give it a subdued grey or reddish-brown shade. By the statute of 1363, poor English people were required to wear russet.[14] 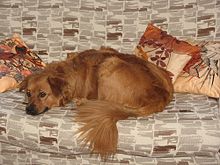 A UPS truck in Pullman brown 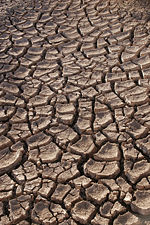 The brown earth during a drought