For other uses, see Thanksgiving (disambiguation).

Thanksgiving in North America had originated from a mix of European and Native traditions.[1] Typically in Europe, festivals were held before and after the harvest cycles to give thanks for a good harvest, and to rejoice together after much hard work with the rest of the community.[1] At the time, Native Americans had also celebrated the end of a harvest season.[1] When Europeans first arrived to the Americas, they brought with them their own harvest festival traditions from Europe, celebrating their safe voyage, peace and good harvest.[1] Though the origins of the holiday in both Canada and the United States are similar, Americans do not typically celebrate the contributions made in Newfoundland, while Canadians do not celebrate the contributions made in Plymouth, Massachusetts.[2] 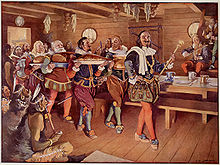 The origin of the first Thanksgiving in Canada goes back to the explorer, Martin Frobisher, who had been trying to find a northern passage to the Pacific Ocean. Frobisher's Thanksgiving celebration was not for harvest, but in thanks for surviving the long journey from England through the perils of storms and icebergs. On his third and final voyage to these regions in 1578 Frobisher held a formal ceremony in Frobisher Bay in Baffin Island in present Day Nunavut to give thanks to God and in a service ministered by the preacher Robert Wolfall they celebrated Communion, the first ever service in these regions.[3] Years later, the tradition of a feast would continue as more settlers began to arrive to the Canadian colonies.[4]

The origins of Canadian Thanksgiving can also be traced to the French settlers who came to New France with explorer Samuel de Champlain in the early 17th century, who also took to celebrating their successful harvests. The French settlers in the area typically had feasts at the end of the harvest season and continued throughout the winter season, even sharing their food with the indigenous peoples of the area.[5] Champlain had also proposed for the creation of the Order of Good Cheer in 1606.[6]

As many more settlers arrived in Canada, more celebrations of good harvest became common. New immigrants into the country, such as the Irish, Scottish and Germans, would also add their own traditions to the harvest celebrations. Most of the U.S. aspects of Thanksgiving (such as the turkey or what were called Guineafowls originating from Madagascar}, were incorporated when United Empire Loyalists began to flee from the United States during the American Revolution and settled in Canada.[5]

The First Thanksgiving at Plymouth By Jennie A. Brownscombe (1914)

In the United States, the modern Thanksgiving holiday tradition traces its origins to a 1621 celebration at Plymouth in present-day Massachusetts. There is also evidence for an earlier harvest celebration on the continent by Spanish explorers in Florida during 1565, as well as thanksgiving feasts in the Virginia Colony. The initial thanksgiving observance at Virginia in 1619 was prompted by the colonists' leaders on the anniversary of the settlement.[7] The 1621 Plymouth feast and thanksgiving was prompted by a good harvest. In later years, the tradition was continued by civil leaders such as Governor Bradford who planned a thanksgiving celebration and fast in 1623.[8][9][10] While initially, the Plymouth colony did not have enough food to feed half of the 102 colonists, the Wampanoag Native Americans helped the Pilgrims by providing seeds and teaching them to fish. The practice of holding an annual harvest festival like this did not become a regular affair in New England until the late 1660s.[11]

According to historian Jeremy Bangs, director of the Leiden American Pilgrim Museum, the Pilgrims may have been influenced by watching the annual services of Thanksgiving for the relief of the siege of Leiden in 1574, while they were staying in Leiden.[12]

The claim of where the first Thanksgiving was held in the United States, and even the Americas has often been a subject of debate. Author and teacher Robyn Gioia and Michael Gannon, of the University of Florida, have argued that the earliest attested "Thanksgiving" celebration in what is now the United States was celebrated by the Spanish on September 8, 1565, in what is now Saint Augustine, Florida.[13][14]

Similarly, many historians point out that the first thanksgiving celebration in the United States was held in Virginia, and not in Plymouth. Thanksgiving services were routine in what was to become the Commonwealth of Virginia as early as 1607.[15] A day of Thanksgiving was codified in the founding charter of Berkeley Hundred in Charles City County, Virginia in 1619.[16]

Fixing the date of the holiday

The reason for the earlier Thanksgiving celebrations in Canada has often been attributed to the earlier onset of winter in the north, thus ending the harvest season earlier.[17] Thanksgiving in Canada did not have a fixed date until the late 19th century. Prior to Canadian confederation, many of the individual colonial governors of the Canadian provinces had declared their own days of Thanksgiving. The first official Canadian Thanksgiving occurred on April 15, 1872 when the nation was celebrating the Prince of Wales' recovery from a serious illness.[17] By the end of the 19th Century, Thanksgiving Day was normally celebrated on November 6. However, when World War I ended, the Armistice Day holiday were usually held during the same week. To prevent the two holidays from clashing with one another, in 1957 the Canadian Parliament proclaimed Thanksgiving to be observed on its present date on the second Monday of October.[5] Since 1971, when the American Uniform Monday Holiday Act took effect, the American observance of Columbus Day has coincided with the Canadian observance of Thanksgiving.

Thanksgiving in the United States, much like in Canada, was observed on various dates throughout history. The dates of Thanksgiving in the era of the Founding Fathers until the time of Lincoln had been decided by each state on various dates. The first Thanksgiving celebrated on the same date by all states was in 1863 by presidential proclamation. The final Thursday in November had become the customary date of Thanksgiving in most U.S. states by the beginning of the 20th century. And so, in an effort by President Abraham Lincoln (influenced by the campaigning of author Sarah Josepha Hale who wrote letters to politicans for around 40 years trying to make it an official holiday), to foster a sense of American unity between the Northern and Southern states, proclaimed the date to be the final Thursday in November.[15]

It was not until December 26, 1941, that the unified date changed to the fourth Thursday (and not always final) in November -this time by federal legislation. President Franklin D. Roosevelt, after two years earlier offering his own proclamation to move the date earlier, with the reason of giving the country an economic boost, agreed to sign a bill into law with Congress, making Thanksgiving a national holiday on the fourth (not final) Thursday in November.

Observance around the world

Thanksgiving, or Thanksgiving Day (Canadian French: Jour de l'Action de grâce), occurring on the second Monday in October, is an annual Canadian holiday to give thanks at the close of the harvest season. Although the original act of Parliament references God and the holiday is celebrated in churches, the holiday is mostly celebrated in a secular manner. Thanksgiving is a statutory holiday in all provinces in Canada, except for New Brunswick and Nova Scotia. While businesses may remain open in these provinces, the holiday is nonetheless, recognized and celebrated regardless of its status.[18][19][20][21][22]

In the West Indian island of Grenada, there is a national holiday known as Thanksgiving Day which is celebrated on October 25. Even though it bears the same name, and is celebrated at roughly the same time as the American and Canadian versions of Thanksgiving, this holiday is unrelated to either of those celebrations. Instead the holiday marks the anniversary of the U.S.-led invasion of the island in 1983, in response to the deposition and execution of Grenadian Prime Minister Maurice Bishop.[23]

In the West African country of Liberia, Thanksgiving is celebrated on the first Thursday of November.[24]

Many of the Pilgrims who migrated to the Plymouth Plantation had resided in the city of Leiden from 1609–1620, many of whom had recorded their birth, marriages and deaths at the Pieterskerk.[25] To commemorate this, a non-denominational Thanksgiving Day service is held each year on the morning of the American Thanksgiving Day in the Pieterskerk, a Gothic church in Leiden, to commemorate the hospitality the Pilgrims received in Leiden on their way to the New World.[26]

In the Australian external territory of Norfolk Island, Thanksgiving is celebrated on the last Wednesday of November, similar to the pre-World War II American observance on the last Thursday of the month. This means the Norfolk Island observance is the day before or six days after the United States' observance. The holiday was brought to the island by visiting American whaling ships.[27]