Nunavut /ˈnuːnəvʊt/ (from Inuktitut: ᓄᓇᕗᑦ [ˈnunavut]) is the largest and newest federal territory of Canada; it was separated officially from the Northwest Territories on April 1, 1999, via the Nunavut Act[7] and the Nunavut Land Claims Agreement Act,[8] though the actual boundaries had been established in 1993. The creation of Nunavut – meaning "our land" in Inuktitut – resulted in the first major change to Canada's map since the incorporation of the new province of Newfoundland in 1949.

Nunavut comprises a major portion of Northern Canada, and most of the Canadian Arctic Archipelago, making it the fifth-largest country subdivision in the world. The capital Iqaluit (formerly "Frobisher Bay") on Baffin Island, in the east, was chosen by the 1995 capital plebiscite. Other major communities include the regional centres of Rankin Inlet and Cambridge Bay. Nunavut also includes Ellesmere Island to the north, as well as the eastern and southern portions of Victoria Island in the west and Akimiski Island in James Bay to the far south.

Nunavut is both the least populous and the largest in geography of the provinces and territories of Canada. One of the most remote, sparsely settled regions in the world, it has an estimated population of over 33,000,[9] mostly Inuit, spread over an area the size of Western Europe. Nunavut is also home to the northernmost permanently inhabited place in the world, Alert.[10]

Nunavut covers, 1,932,255 km2 (746,048 sq mi) of land and 160,935 km2 (62,137 sq mi) of water in Northern Canada. The territory includes part of the mainland, most of the Arctic Archipelago, and all of the islands in Hudson Bay, James Bay, and Ungava Bay (including the Belcher Islands) which belonged to the Northwest Territories. This makes it the fifth largest subnational entity (or administrative division) in the world. If Nunavut were a country, it would rank 15th in area.[11]

Nunavut has land borders with the Northwest Territories on several islands as well as the mainland, Manitoba to the south of the Nunavut mainland, Saskatchewan to the southwest (at a single four-corner point) and a tiny land border with Newfoundland and Labrador on Killiniq Island. It also shares maritime borders with the provinces of Quebec, Ontario, and Manitoba and with Greenland.

Nunavut's highest point is Barbeau Peak (2,616 m (8,583 ft)) on Ellesmere Island. The population density is 0.015 persons per square kilometre, one of the lowest in the world. By comparison, Greenland has approximately the same area and nearly twice the population.[12]

The region now known as Nunavut has supported a continuous indigenous population for approximately 4,000 years. Most historians identify the coast of Baffin Island with the Helluland described in Norse sagas, so it is possible that the inhabitants of the region had occasional contact with Norse sailors.

In September 2008, researchers reported on the evaluation of existing and newly excavated archaeological remains, including yarn spun from a hare, rats, tally sticks, a carved wooden face mask depicting Caucasian features, and possible architectural material. The materials were collected in five seasons of excavation at Cape Banfield. Scholars have determined these are evidence of European traders and possibly settlers on Baffin Island not later than 1000 CE. They seem to indicate prolonged contact, possibly up to 1450. The origin of the Old World contact is unclear; the article states: "Dating of some yarn and other artifacts, presumed to be left by Vikings on Baffin Island, have produced an age that predates the Vikings by several hundred years. So [...] you have to consider the possibility that as remote as it may seem, these finds may represent evidence of contact with Europeans prior to the Vikings' arrival in Greenland."[13]

The written historical accounts of Nunavut begin in 1576, with an account by an English explorer. Martin Frobisher, while leading an expedition to find the Northwest Passage, thought he had discovered gold ore around the body of water now known as Frobisher Bay on the coast of Baffin Island.[14] The ore turned out to be worthless, but Frobisher made the first recorded European contact with the Inuit. Other explorers in search of the elusive Northwest Passage followed in the 17th century, including Henry Hudson, William Baffin and Robert Bylot.

Cornwallis and Ellesmere Islands feature in the history of the Cold War in the 1950s. Concerned about the area's strategic geopolitical position, the federal government relocated Inuit from the High Arctic of northern Quebec to Resolute and Grise Fiord. In the unfamiliar and hostile conditions, they faced starvation[15] but were forced to stay.[16] Forty years later, the Royal Commission on Aboriginal Peoples issued a report titled The High Arctic Relocation: A Report on the 1953–55 Relocation.[17] The government paid compensation to those affected and their descendants, but it did not apologize.[18]

In 1976, as part of the land claims negotiations between the Inuit Tapiriit Kanatami (then called the "Inuit Tapirisat of Canada") and the federal government, the parties discussed division of the Northwest Territories to provide a separate territory for the Inuit. On April 14, 1982, a plebiscite on division was held throughout the Northwest Territories. A majority of the residents voted in favour and the federal government gave a conditional agreement seven months later.[19]

The land claims agreement was completed in September 1992 and ratified by nearly 85% of the voters in Nunavut. On July 9, 1993, the Nunavut Land Claims Agreement Act[8] and the Nunavut Act[7] were passed by the Canadian Parliament. The transition to establish Nunavut Territory was completed on April 1, 1999.[20]

The population growth rate of Nunavut has been well above the Canadian average for several decades, mostly due to birth rates which are significantly higher than the Canadian average, which is a trend that continues to this day. Between April and July 2010, Nunavut saw the highest population growth rate of any Canadian province or territory, at a rate of 1.01%.[22] The second highest was Yukon, with a growth rate of 0.90%. However, Nunavut has a large net loss from migration, due to many native Inuit leaving the territory for better economic opportunity elsewhere.

Along with the Inuit Language (Inuktitut and Inuinnaqtun), English, and French are also official languages.[1]

In his 2000 commissioned report (Aajiiqatigiingniq Language of Instruction Research Paper) to the Nunavut Department of Education, Ian Martin of York University states that a "long-term threat to Inuit language from English is found everywhere, and current school language policies and practices on language are contributing to that threat" if Nunavut schools follow the Northwest Territories model. He provides a 20-year language plan to create a "fully functional bilingual society, in Inuktitut and English" by 2020. The plan provides different models, including: 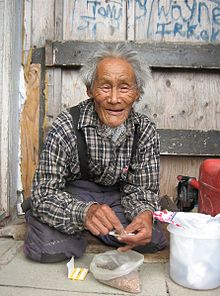 Of the 29,025 responses to the census question concerning 'mother tongue', the most commonly reported languages were:

Nunavut's Chief Executive is a Commissioner appointed by the federal Minister of Indian Affairs and Northern Development. As in the other territories, the commissioner's role is symbolic and is analogous to that of a Lieutenant-Governor. While the Commissioner is not formally a representative of Canada's head of state, a role roughly analogous to representing The Crown has accrued to the position.

Nunavut elects a single member of the Canadian House of Commons. This makes Nunavut the largest parliamentary riding in the world by area, just ahead of the American state of Alaska.

Faced by criticism of his policies, former Premier Paul Okalik set up an advisory council of eleven elders, whose function it is to help incorporate "Inuit Qaujimajatuqangit" (Inuit culture and traditional knowledge, often referred to in English as "IQ") into the territory's political and governmental decisions.[citation needed]

Owing to Nunavut's vast size, the stated goal of the territorial government has been to decentralize governance beyond the region's capital. Three regions—Kitikmeot, Kivalliq and Qikiqtaaluk/Baffin—are the basis for more localized administration, although they lack autonomous governments of their own.[citation needed]

The territory has an annual budget of C$700 million, provided almost entirely by the federal government. Former Prime Minister Paul Martin designated support for Northern Canada as one of his priorities for 2004, with an extra $500 million to be divided among the three territories.[citation needed]

In 2001, the government of New Brunswick[citation needed] collaborated with the federal government and the technology firm SSI Micro to launch Qiniq, a unique network which uses satellite delivery to provide broadband Internet access to 24 communities in Nunavut. As a result, the territory was named one of the world's "Smart 25 Communities" in 2006 by the Intelligent Community Forum, a worldwide organization which honours innovation in broadband technologies.

The indigenous music of Nunavut includes Inuit throat singing and drum-led dancing, along with country music, bluegrass, square dancing, the button accordion and the fiddle, brought by European immigration.

The Inuit Broadcasting Corporation is based in Nunavut. The territory is also served by Nunatsiaq News and Nunavut News/North, published by Northern News Services, who also publish the regional Kivalliq News.[36] Broadband internet is provided by Qiniq and Northwestel through Netkaster.[37][38]

The film production company Isuma is based in Igloolik. Co-founded by Zacharias Kunuk and Norman Cohn in 1990, the company produced the 1999 feature Atanarjuat, winner of the Caméra d'Or for Best First Feature Film at the 2001 Cannes Film Festival and the first feature film to be written, directed and acted entirely in Inuktitut.

In November 2006, the National Film Board of Canada (NFB) and the Inuit Broadcasting Corporation announced the start of the Nunavut Animation Lab, offering animation training to Nunavut artists at workshops in Iqaluit, Cape Dorset and Pangnirtung.[39] Films from the Nunavut Animation Lab include Alethea Arnaquq-Baril's 2010 digital animation short Lumaajuuq, winner of the Best Aboriginal Award at the Golden Sheaf Awards and named Best Canadian Short Drama at the imagineNATIVE Film + Media Arts Festival.[40]

In November 2011, the government of Nunavut and the NFB jointly announced the launch of a DVD and online collection entitled Unikkausivut (Inuktitut: Sharing Our Stories), which will make over 100 NFB films by and about Inuit available in Inuktitut, Inuinnaqtun and other Inuit languages, as well as English and French. The Government of Nunavut is distributing Unikkausivut to every school in the territory.[41][42]

Artcirq is a collective of Inuit circus performers based in Igloolik.[43] The group has performed around the world, including at the 2010 Olympic Winter Games in Vancouver, British Columbia.

The Nunavut licence plate was originally created for the Northwest Territories in the 1970s and has long been famous worldwide for its unique design: shaped like a polar bear. Nunavut opted to use the same licence plate design in 1999 when it became a separate territory.[44]

Susan Aglukark is an Inuit singer and song writer. She has released six albums and has won several Juno Awards. She blends the Inuktitut and English languages with contemporary pop music arrangements to tell the stories of her people, the Inuit of Arctic.

On May 3, 2008, the Kronos Quartet premiered a collaborative piece with Inuit throat singer Tanya Tagaq, entitled "Nunavut", which makes use of an Inuit folk story. Tagaq is also known internationally for her collaborations with Icelandic pop star Björk.

Jordin John Kudluk Tootoo (Inuktitut syllabics: ᔪᐊᑕᓐ ᑐᑐ; born February 2, 1983 in Churchill, Manitoba, Canada) is a professional ice hockey player with the Nashville Predators of the National Hockey League. His middle name Kudluk (kalluk in standard Roman spelling) means "thunder." Although born in Manitoba, Tootoo grew up in Rankin Inlet, where he was taught to skate and play hockey by his father, Barney. Growing up in Rankin Inlet also allowed Tootoo to learn the traditional Inuit lifestyle that includes hunting and camping. As the first Inuk to play in the National Hockey League he has become a role model for youth in Nunavut.