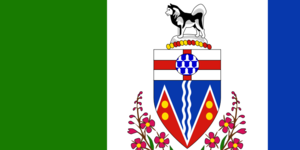 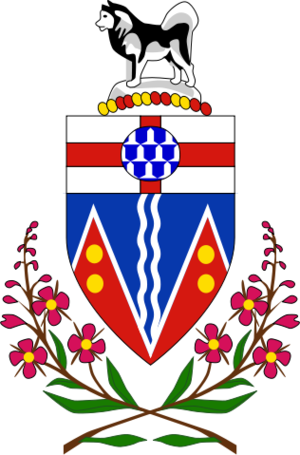 Yukon (IPAEng|ˈjuːkɒn) is the westernmost and smallest of Canada's three territories. It was named after the , Yukon meaning "Great River" in Gwich’in.

The name Yukon Territory may also be used, although this usage is disputed by residents of the territory. The federal government's most recent update of the "Yukon Act" in 2003 confirmed Yukon, rather than Yukon Territory, as the current usage standard. [ [http://www.canlii.org/ca/sta/y-2.01/ CanLII - Federal - S.C. 2002, c. 7] ]

The very sparsely populated territory abounds with snow-melt lakes and perennial white-capped mountains. Although the climate is Arctic and subarctic and very dry, with long, cold winters, the long sunshine hours in short summer allow hardy crops and vegetables, along with a profusion of flowers and fruit to blossom.

The territory is the approximate shape of a right triangle, bordering the of to the west, the to the east and to the south. Its northern coast is on the . Its ragged eastern boundary mostly follows the divide between the Yukon Basin and the to the east in the Mackenzie mountains. Its capital is Whitehorse.

Canada's highest point, Mount Logan (convert|5959|m|ft|0|abbr=on|disp=/), is found in the territory's southwest. Mount Logan and a large part of the Yukon's southwest are in , a UNESCO . Other national parks include and in the north.

Most of the territory is in the watershed of its namesake, the Yukon River. The southern Yukon is dotted with a large number of large, long and narrow glacier-fed alpine lakes, most of which flow into the Yukon River system. The larger lakes include , , , , , , and . on the Klondike Gold Rush trail is a lake flowing into Nares Lake, with the greater part of its area within the Yukon.

The capital, Whitehorse, is also the largest city, with about two-thirds of the population; the second largest is Dawson City, (pop. 1,250) which was the capital until 1952.

Long before the arrival of Europeans, central and northern Yukon escaped glaciation as it was part of Beringia (). Remains of human inhabitation were found near Old Crow appearing to be the oldest in North America. Around AD 800, the volcanic eruption of near the border blanketed southern Yukon with a layer of ash which can still be seen along the . Coastal and interior already had extensive trading networks and European incursions into the area only began early in the 19th century with the , followed by missionaries and the Western Union Telegraph Expedition. By the latter end of the 19th century gold miners were trickling in on rumours of gold, creating a population increase justifying the setting up of a police force, just in time for 1897's start of the . The increased population coming with the gold rush led to the separation of the Yukon district from the Northwest Territories and the formation of the separate Yukon Territory.

The territory once had an settlement, located on off the Arctic coast. This settlement was dismantled in 1987 and its inhabitants relocated to the neighboring Northwest Territories. As a result of the Final Agreement, the island is now a territorial park and is known officially as , Qikiqtaruk being the name of the island in . There are also 14 First Nations that speak 8 different languages.