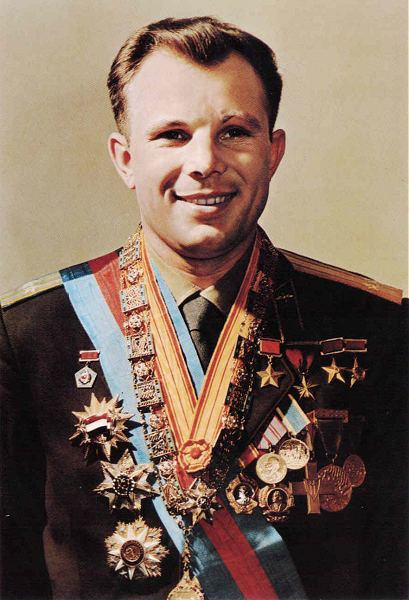 Yuri Gagarin was born in the village of near Gzhatsk (now in , ), on 9 March 1934. The adjacent town of Gzhatsk was renamed Gagarin in 1968 in his honor. His parents, father Alexey Ivanovich Gagarin and mother Anna Timofeyevna Gagarina, worked on a .

After starting an apprenticeship in a metalworks as a foundryman, Gagarin was selected for further training at a technical high school in . While there, he joined the "AeroClub", and learned to fly a light aircraft, a hobby that would take up an increasing proportion of his time. Through dint of effort, rather than brilliance, he reportedly mastered both; in 1955, after completing his technical schooling, he entered military flight training at the Pilot's School. While there he met Valentina Goryacheva, whom he married in 1957, after gaining his pilot's wings in a . Post-graduation, he was assigned to airbase in , close to the Norwegian border, where terrible weather made flying risky. As a full-grown man, Gagarin was convert|1.57|m|ftin tall, which was an advantage in the small Vostok . He became of the on 5 November 1957 and on 6 November 1959 he received the rank of Senior Lieutenant.

Career in the Soviet space program

In 1960, after the search and selection process Yuri Gagarin was selected with 19 other cosmonauts for the . Along with the other prospective cosmonauts, he was subjected to experiments designed to test his physical and psychological endurance; he also underwent training for the upcoming flight. Out of the twenty selected, the eventual choices for the first launch were Gagarin and because of their performance in training, as well as their physical characteristics — space was at a premium in the small Vostok cockpit and both men were rather short. Soviet officials weighed other factors as well in selecting Yuri: his appearance, his capacity to handle media attention, his Russian heritage and even the name "Gagarin," which was also a family name associated with Tsarist aristocracy.

There are speculations in the media that from orbit Gagarin made the comment, "I don't see any God up here." However, no such words appear in the verbatim record of Gagarin's conversations with the Earth during the spaceflight.

While in orbit Gagarin was promoted "in the field" from the rank of Senior to , and this was the rank at which TASS announced him in its triumphant statement during the flight.Fact|date=February 2007

Gagarin being safely returned, rushed to his side and Gagarin issued a statement praising the as the "organizer of all our victories". Khrushchev saw Gagarin's achievement as a vindication of his policy of strengthening the Soviet Union's missile forces at the expense of conventional arms. This policy antagonized the Soviet military establishment and contributed to Khrushchev's eventual downfall.

After the flight, Gagarin became a worldwide celebrity, touring widely with appearances in Italy, Great Britain,

In 1962, he began serving as a deputy to the . He later returned to Star City, the cosmonaut facility, where he worked on designs for a reusable spacecraft. Gagarin worked on these designs in Star City for 7 years. Gagarin became (or ) of the on 12 June 1962 and on 6 November 1963 he received the rank of () of the Soviet Air Force. Soviet officials tried to keep him away from any flights, being worried of losing their hero in an accident. Gagarin was backup pilot for in the flight. As Komarov's flight ended in a fatal crash, Gagarin was ultimately banned from the space program.

Gagarin then became deputy training director of the Star City cosmonaut training base. At the same time, he began to re-qualify as a . On 27 March 1968, while on a routine training flight out of Chkalovsky Air Base, he and flight instructor Vladimir Seryogin (Seregin) died in a MiG-15UTI crash near the town of . Gagarin and Seryogin were buried in the walls of the Kremlin on .

It is not certain what caused the crash, but a 1986 inquest suggests that the turbulence from a Su-11 'Fishpot-C' interceptor using its afterburners may have caused Gagarin's plane to go out of control.

Russian documents declassified in March 2003 showed that the had conducted their own investigation of the accident, in addition to one government and two military investigations. The KGB's report dismissed various conspiracy theories, instead indicating that the actions of air base personnel contributed to the crash. The report states that an provided Gagarin with outdated weather information, and that when Gagarin flew, conditions had deteriorated significantly. Ground crew also left external fuel tanks attached to the aircraft. Gagarin's planned flight activities needed clear weather and no outboard tanks. The investigation concluded that Gagarin's aircraft entered a spin, either due to a or because of a sudden move to avoid another aircraft. Because of the out-of-date weather report, the crew believed their altitude to be higher than it actually was, and could not properly react to bring the MiG-15 out of its spin.

In his 2004 book "Two Sides of the Moon", recounts that he was flying a helicopter in the same area that day when he heard "two loud booms in the distance." Corroborating other theories, his conclusion is that a Sukhoi jet (which he identifies as a Su-15 'Flagon') was flying below its minimum allowed altitude, and "without realizing it because of the terrible weather conditions, he passed within 10 or 20 meters of Yuri and Seregin's plane while breaking the sound barrier." The resulting turbulence would have sent the MiG into an uncontrolled spin. Leonov believes the first boom he heard was that of the jet breaking the sound barrier, and the second was Gagarin's plane crashing.

A new theory, advanced by the original crash investigator in 2005, hypothesizes that a cabin air vent was accidentally left open by the crew or the previous pilot, leading to and leaving the crew incapable of controlling the aircraft.