Aviator
This article is about the occupation. For other uses, see Aviator (disambiguation).

Louis Blériot in his monoplane.

An aviator is a person who flies an aircraft. The first recorded use of the term (aviateur in French) was in 1887, as a variation of 'aviation', from the Latin avis (meaning bird), coined in 1863 by G. de la Landelle in Aviation Ou Navigation Aérienne (Aviation or Air Navigation). The term aviatrix (aviatrice in French), now archaic, was formerly used for a female aviator.

The term is often applied simply to pilots, but can be extended to include aviation navigators, bombardiers, Weapon Systems Officers, and Electronic Warfare Officers. This should not be confused with the term naval aviator, which refers to crew members in the U.S. Navy, U.S. Marine Corps and U.S. Coast Guard.

The term "aviator", as opposed to "pilot" or other terms, was used more in the early days of aviation, before anyone had ever seen an airplane fly, and it was used to show connotations of bravery and adventure. For example, the editors at the Dayton Herald, (in an article of December 18, 1903) described the Wright brothers' first airplane as thus: "The weight, including the body of the aviator, is slightly over 700 pounds".

To ensure the safety of people in the air as well as on the ground, it soon became a requirement for an aircraft to be under the operational control of a properly trained, certified and current pilot at all times, who is responsible for the safe and legal completion of the flight. The first certificate was delivered by the Aéro-Club de France to Louis Blériot in 1908, followed by Glenn Curtiss, Léon Delagrange, and Robert Esnault-Pelterie. The absolute authority given to the "pilot in command" is derived from that of a ship's captain.[citation needed]

In recognition of the aviators' qualifications and responsibilities, most militaries and many airlines around the world award aviator badges to their pilots, as well as other air crews. 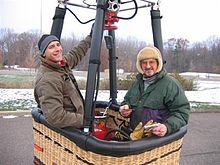 Civilian pilots fly privately for pleasure, charity, or in pursuance of a business, for non-scheduled commercial air-transport companies, or for airlines. When flying for an airline, pilots are usually referred to as airline pilots, with the pilot in command often referred to as the captain.

United Airlines and Delta Air Lines have slashed their pilot pay scales and benefits in the face of fierce competition from low-cost carriers. In fact, Southwest Airlines Captains and First Officers both have higher salaries than their counterparts at legacy carriers. As of May 2008, median annual earnings of airline pilots, co-pilots, and flight engineers were $111,680.[1] However, such salaries represent the upper level of airline pay scales. Salaries at regional airlines can be considerably less - though, according to the Bureau of Labor statistics, median annual earnings of commercial pilots were $65,340, with the middle 50 per cent earning between $45,680 and $89,540.[1] Pilots making very large salaries are typically senior airline captains, while pilots making very small salaries are generally low-seniority first officers. A large variability in salaries can easily skew an average; thus, the use of median wages to gauge such things as salary. Where large gaps are seen between a median figure, and a lower-bound figure, this usually reflects those who do not stay in that particular field. Viewing this middle ground in context to the upper-bound numbers can give a burgeoning pilot an idea of what to expect if they are able to stay with flying as a full-time career. Based upon voluntary pilot reports, many United States airline pay scales are listed here: [1]. Most airline pilots are unionized, with the Air Line Pilots Association, International (ALPA)[2] being the largest pilot labor union in the United States.

In the United States, due to pay cuts, airline bankruptcies and other industry problems, there are fewer young people who want to make a career out of flying. First-year pilots at AMR Corporation's outsourced operation called AmericanConnection, which is flown by multiple regional partners, would only earn $22,000 a year if they could pick up and fit into their schedule all the extra flying allowed under federal FAA rules.[3]

Commercial airline pilots in the United States have a mandatory retirement age of 65, increased from age 60 in 2007.[4]

In some countries, such as Pakistan, Israel, Thailand and several African nations, there is a strong relationship between the military and the principal national airlines, and many airline pilots come from the military; however, that is no longer the case in the United States and Western Europe. While the flight decks of U.S. and European airliners do have ex-military pilots, many pilots are civilians. Military training and flying, while rigorous, is fundamentally different in many ways from civilian piloting. Military pilots are trained to higher regulatory standards than civilian pilots, and while both paths create a safe pilot, civilian pilots are better versed in civilian regulations. 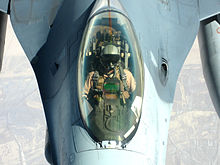 Military pilots are trained with a different syllabus than civilian pilots, which is delivered by military instructors. This is due to the different aircraft, flight goals, flight situations and chains of responsibility. Many military pilots do transfer over to civilian-pilot qualification after they leave the military, and typically their military experience will be used to grant a civilian pilot's license.

Pilots are required to go through many hours of training and theoretical study, that differ depending on the country. The first step is acquiring the Private Pilot License (PPL), or Private Pilot Certificate.

The next step in a pilot's progression is either Instrument Rating (IR), or Multi-Engine Rating (MEP) endorsements.

If a professional career or simply professional-level skills are desired, a Commercial Pilot License (CPL) endorsement would also be required. To be the captain of an airliner, one must obtain an Airline Transport Pilot License (ATP).

In human spaceflight, a "pilot" is someone who directly controls the operation of a spacecraft, while located within the same craft. This term derives directly from the usage of the word "pilot" in aviation, where it is synonymous with "aviator". Note that on the U.S. Space Shuttle, the term "pilot" is analogous to the term "co-pilot" in aviation, as the "commander" has ultimate responsibility for the shuttle. 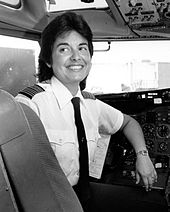 Beverly Lynn Burns, first woman in the world to captain the Boeing 747 airliner.

As well as being Turkey's first aviatrix, Sabiha Gökçen, born in 1913, became the world's first female fighter pilot at the age of 23.[5][6]

In 1979, a Jamaican, Maria Ziadie-Haddad, became one of the first women in the Western Hemisphere to become a commercial jet airline pilot when she was hired by Air Jamaica 1968 Ltd as a B727 Second Officer.[7]

The Night Witches, a women-only combat regiment of the Soviet Air Forces, flew harassment bombing and precision bombing missions from 1942 to the end of the World War II.

Until the 1970s, aviation had been a traditionally male occupation in the United States. Commerce Department regulations virtually required pilots to have flown in the military to acquire sufficient flight hours, and until the 1970s, the U.S. Air Force and Navy barred women from flying,[8] thus also preventing them from moving into commercial piloting[citation needed] Despite women being trained by the US Army Air Corps and flying every advanced military aircraft the US built (including every bomber, pursuit plane, and the first jet) during WWII as Women Airforce Service Pilots (WASP), this program was disbanded in December 1944 and commercial jobs were not generally available to women, though these highly trained women flew as instructors and pilots for flying services throughout the United States. Women began to enter U.S. major commercial aviation in the 1970s and 1980s, with 1973 seeing the first female pilot at a major U.S. airline, American Airlines, and 1986, seeing the first female captain at a major U.S. airline.[9] In the 1970s, women began being permitted to fly in the United States Armed Forces for the first time since WWII, beginning with the Navy and the Army in 1974, and then the Air Force in 1976.[10]

As of 2006, just over 6% of certified civilian pilots (both private and commercial) in the United States were women.[11]

In Japan, the first female captain for commercial passenger flights was Ari Fuji, who began flying as captain for JAL Express in July 2010.[12] Fuji was rejected from admission to Japanese pilot training school on the grounds of being too small (155 cm; standard was previously 163 cm, currently 158 cm (as of spring 2010)), so she got her pilot's license in the United States. There are currently a few other female pilots in Japan, though, as of 2010[update], no others in a captain role.