Churchill is a town on the shore of Hudson Bay in Manitoba, Canada. It is most famous for the many polar bears that move toward the shore from inland in the autumn, leading to the nickname "Polar Bear Capital of the World" that has helped its growing tourism industry.

A variety of nomadic Arctic people lived and hunted in this region. The Thule people arrived around A.D. 1000 from farther west, and later evolved into the present-day Inuit culture. The Dene people arrived around 500 from farther north. Since before the time of European contact, the region around Churchill has been predominantly inhabited by the Chipewyan and Cree natives.

Europeans first arrived in the area in 1619 when a Danish expedition led by Jens Munk wintered where Churchill would later stand. Only 3 of 64 expedition members survived the winter and journeyed back to Denmark.[3]

After an abortive attempt in 1688-89, in 1717 the Hudson's Bay Company built the first permanent settlement, Churchill River Post, a log fort a few miles upstream from the mouth of the Churchill River. The trading post and river were named after John Churchill, 1st Duke of Marlborough (an ancestor of Winston Churchill), who was governor of the Hudson's Bay Company in the late seventeenth century. The fort was built mostly to capitalize on the North American fur trade, out of the reach of York Factory. It dealt mainly with the Chipewyan natives living north of the boreal forest. Much of the fur came from as far away as Lake Athabasca and the Rocky Mountains.

As part of the Anglo-French dispute for North America, in 1731-1741 the original fort was replaced with Prince of Wales Fort, a large stone fort on the western peninsula at the mouth of the river. In 1782 the fort was captured by the French; since the English were greatly outnumbered, they surrendered without firing a shot. The Europeans and all the trade goods were taken to France and an unsuccessful attempt was made to demolish the fort. The worst effect was on the local natives who had become dependent on trade goods from the fort and many starved. The respective commanders were Samuel Hearne and La Pérouse, both better known as explorers.

In 1783, Hearne was released and returned to build a new fort a short distance upriver. Due to its distance from the lands of heavy competition between the North West Company and the Hudson's Bay Company, it remained a relatively stable, if not profitable, source of furs.

Between the years of decline in the fur trade and surfacing of western agricultural success, Churchill phased into and then back out of obsolescence. After decades of frustration over the monopoly and domination of the Canadian Pacific Railway, western Canadian governments banded together and argued for the creation of a major new northern shipping harbour on Hudson Bay, linked by rail from Winnipeg. Initially Port Nelson was selected for this purpose in 1912. After several years of effort and millions of dollars, this project was abandoned and Churchill was selected as the alternative after World War One. Surveys by the Canadian Hydrographic Service ship CSS Acadia opened the way for safe navigation. However, construction and use of the railroad was extremely slow and the rail line itself did not come to Churchill until 1929.

Even once the link from farm to port was completed, commercial shipping took many more years to pick up. In 1932 Grant MacEwan was the first person to cross through Churchill customs as a passenger. This was purely due to his determination in taking the Hudson Bay route to Saskatchewan from Britain—most passengers returned via the Saint Lawrence River.

This area was also the site of the Churchill Rocket Research Range, part of Canadian-American atmospheric research. Its first rocket was launched in 1956, and it continued to host launches for research until closing in 1984. The site of the former rocket range now hosts the Churchill Northern Studies Centre, a facility for Arctic research. The rocket range and subsequent Spaceport Canada effort are located at Fort Churchill.

In the 1950s, the British government considered establishing a site near Churchill for testing their early nuclear weapons, before choosing Australia instead.[4]

Polar bears on the ice.

Churchill is situated at the estuary of the Churchill River at Hudson Bay. The small community stands at an ecotone, on the Hudson Plains, at the juncture of three ecoregions: the boreal forest to the south, the Arctic tundra to the northwest, and the Hudson Bay to the north. Wapusk National Park is located to the south of the town.

The landscape around Churchill is influenced by shallow soils caused by a combination of subsurface permafrost and Canadian Shield rock formation. The Black Spruce dominant tree cover is sparse and stunted from these environmental constraints. There is also a noticeable ice pruning effect to the trees.[5] The area also offers sport fishing. Several tour operators offer expeditions on land, sea and air, using all terrain vehicles, boats, canoes, helicopters and even ultralight aircraft.

The Aurora Borealis (Northern Lights) can be seen in late August and from December to late April in the night skies over Churchill.

Churchill has a subarctic climate with long very cold winters, and short, cool to mild summers.[6] Churchill's winters are colder than a location at a latitude of 58 degrees north should warrant, given its coastal location. The shallow Hudson Bay freezes, eliminating any maritime moderation. Prevailing northerly winds from the North Pole jet across the frozen bay and chill it to a −26.7 °C (−16.1 °F)[7] January average. Juneau, Alaska, by contrast, is also located at 58 degrees north but is moderated by the warmer and deeper Pacific Ocean. Juneau's −3.5 °C (25.7 °F)[8] January average temperature is a full 23.2 °C (41.8 °F) warmer than Churchill's. Yet in summer, when the Hudson Bay thaws, Churchill's summer is moderated. Churchill's 12.0 °C (53.6 °F)[7] July average temperature is almost the same as Juneau's 13.8 °C (56.8 °F)[8] July average.

Churchill is a popular location for ecotourism, as well as for Arctic research. The town also has a health centre, several hotels, tour operators, some restaurants, a rail line and a shipping marine port with a large grain elevator. 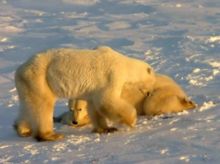 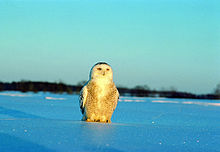 Churchill is situated along Manitoba's 1,400 km (870 mi) coastline, on Hudson Bay at the meeting of three major biomes: marine, boreal forest and tundra,[9][10][11][12] each supporting a variety of flora and fauna.

In recent years, the town has developed a sizable tourism industry focused on the migration habits of the polar bear. Although there are more reported bears than people in Churchill, this claim has been disputed and challenged by the large presence of other animals as well.

Tourists can safely view polar bears from specially modified buses known as tundra buggies. Use of the buggies helps sustain local tourism, but can also cause damage to the local ecosystem when driven outside the established trails. October and early November are the most feasible times to see polar bears, thousands of which wait on the vast peninsula until the water freezes on Hudson Bay so that they can return to hunt their primary food source, ringed seals.

There are also opportunities to see polar bears in the non-winter months, with tours via boat visiting the coastal areas where polar bears can be found both on land and swimming in the sea.

Local authorities maintain a so-called "polar bear jail" where bears (mostly adolescents) who persistently loiter in or close to town, are held after being tranquillised, pending release back into the wild when the bay freezes over. Polar bears were once thought to be solitary animals that would avoid contact with other bears except for mating. In the Churchill region, however, many alliances between bears are made in the fall. These friendships last only until the ice forms, then it is every bear for himself to hunt ringed seals.

Thousands of beluga whales, which move into the warmer waters of the Churchill River estuary during July and August to calf, are a major summer attraction.

Churchill is also a destination for bird watchers from late May until August.[13] Each year, 10,000-12,000 eco-tourists visit, about 400-500 of whom are birders. Birders have recorded more than 270 species within a 25 mi (40 km) radius of Churchill, including Snowy Owl, Tundra Swan, American Golden Plover and Gyrfalcon. Plus, more than 100 birds, including Parasitic Jaeger, Smith's Longspur, Stilt Sandpiper, and Harris's Sparrow, nest there.[14]

As of the 2006 Canada Census, just under half (44.10%) of the population was non-native and the rest (56.41%) were Aboriginal, mostly Chipewyan and Swampy Cree (33.85%), with some Métis (16.41%) and a small number of Inuit (5.64%).[15] Hunting, trapping and fishing is still an important activity to most of these men; although there are some summer trails, snowmobiles are their main way of transport. The main language is English and several residents also speak Cree language.[15]

The town has a modern multiplex centre housing a public library, hospital, health centre, day care, swimming pool, ice hockey rink, curling rinks, gym, basket ball courts, indoor playground, one cinema and a cafeteria. Nearby is the "Eskimo Museum", operated by the Diocese of Churchill-Baie d'Hudson, with over 850 high quality Inuit carvings on permanent display. The exhibits include historic and contemporary sculptures of stone, bone, and ivory, as well as archaeological and wildlife specimens.[16] Parks Canada visitor centre also has artifacts on display and makes use of audiovisual presentations of various topics involving the region's natural and archaeological history.

By the late 1980s, both the local government and Parks Canada had successfully educated its population on polar bear safety, significantly reducing lethal confrontations and fuelling ecotourism in such a way that the community and the polar bears have benefited.

The town also has a modern health centre, the Churchill Regional Health Authority, which employs about 100 people. It provides 44 beds, dental care and diagnostic laboratories to service the residents of Churchill and the communities of the Kivalliq Region (Keewatin) of Nunavut.[17]

The Northern Studies Centre is a non-profit research and education facility located 23 km (14 mi) east of the town of Churchill. They provide accommodations, meals, equipment rentals, and logistical support to scientific researchers working on a diverse range of topics of interest to northern science.[18]

The Port of Churchill

The town is the northern terminus of the Hudson Bay Railway owned by railroad holding company, OmniTRAX. It is a useful link in the export of Canadian grain to European markets, with rail-sea connections made at Churchill. The Port of Churchill is also owned by OmniTRAX. It is Canada's principal seaport on the Arctic Ocean. The Winnipeg – Churchill train, a passenger train operated by Via Rail provides service between the Churchill railway station and Union Station in Winnipeg 2 times per week, a 1,700 km (1,100 mi) journey that takes about 40 hours.[19][20]

Via Rail train in Churchill station

Churchill is also a major seaport in north-central Canada. Marine transportation companies, Northern Transportation Company Limited[21] (NTCL), headquartered in Hay River, Northwest Territories, and Nunavut Sealink and Supply (NSSI),[22] both have bases in Churchill and provide sealift to the Eastern Arctic and to a few Central Arctic communities.

The government of Manitoba has proposed that the Port of Churchill could serve as an "Arctic gateway", accepting containerships from Asia whose containers would then be transported south by rail to major destinations in North America.[23]

Churchill has one newspaper called The Hudson Bay Post. It is a monthly newspaper, 'published occasionally', according to the front page.