The term "ultralight aviation" refers to light-weight, 1- or 2-person airplanes., also called microlight aircraft in the UK, India and New Zealand. Some countries differentiate between weight shift and 3-axis aircraft, calling the former "microlight" and the latter "ultralight".

During the late 1970s and early 1980s, mostly stimulated by the hang gliding movement, many people sought affordable powered flying. As a result, many aviation authorities set up definitions of lightweight, slow-flying aeroplanes that could be subject to minimum regulations. The resulting aeroplanes are commonly called "ultralight" or "microlight", although the weight and speed limits differ from country to country. In Europe the sporting (FAI) definition limits weight to 450 kg (992 lb) and stall speed to 65 km/h (40 mph). Such a definition forces the aircraft to be capable of a slow landing speed and short landing roll in the event of an engine failure.

There is also an allowance of a further 10% on Maximum Take Off Weight for seaplanes and amphibians, and some countries (such as Germany, Poland and France) also allow another 5% for installation of a ballistic parachute.

The safety regulations used to approve microlights vary between countries, the strictest being in the United Kingdom, Italy, Sweden and Germany, while they are almost non-existent in France and the United States. The disparity between regulations can be a barrier to international trade and overflight in strict regions, as is the fact that these regulations are invariably sub-ICAO, which means that they are not internationally recognised.

In countries where there is no specific extra regulation, ultralights are considered regular aircraft and subject to certification requirements for both aircraft and pilot. 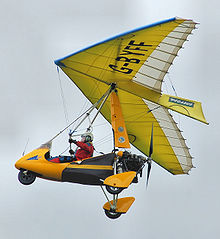 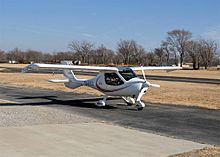 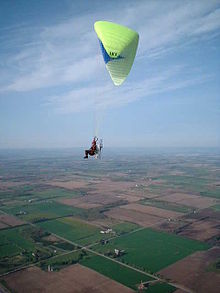 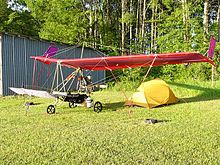 A US-made Pterodactyl Ascender ultralight on a camping flight 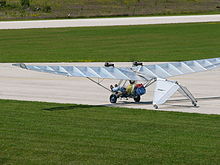 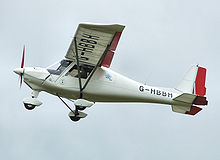 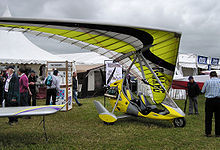 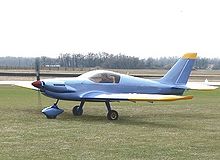 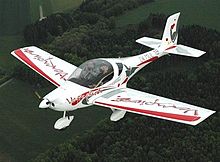 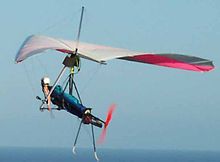 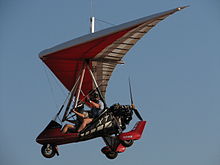 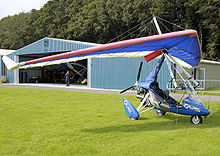 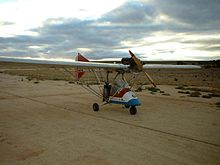 In Australia Recreational Aircraft fall under many categories,[2] but the most common category imposes:

A new certification category for Light Sport Aircraft came into effect on 7 January 2006.[3] This category does not replace the previous categories, but creates a new category with the following characteristics:

In either of the above categories, there are distinctions between factory manufactured and home built aircraft.

In Australia, microlight aircraft are defined as one or two seat weight-shift aircraft, with a maximum takeoff weight of 450 kg (992 lb), as set out by the Civil Aviation Safety Authority. In Australia microlights are also referred to as trikes and are distinguished from three-axis aircraft, of which the smallest are known as ultralights.

The Brazilian Aviation Regulation (RBHA 103A)[7] defines an ultralight plane as: a very light manned experimental aircraft used mainly, or intended for, sports or recreation, during daylight, in visual conditions, with a maximum capacity of 2 people and with the following characteristics:

The Canadian Aviation Regulations define two types of ultralight aeroplanes: basic ultra-light aeroplanes (BULA), and advanced ultra-light aeroplanes (AULA). The US light sport aircraft is similar to, and was based upon, the Canadian AULA. AULAs may operate at a controlled airport without prior arrangement.[8] Operating either class of ultralight in Canada requires an Ultralight Pilot Permit which requires both ground school, dual and solo supervised flights. The ultralight may be operated from land or water, but may only carry a passenger if the pilot has an Ultralight Aeroplane Passenger Carrying Rating and the aircraft is an AULA.

The definition of a microlight according to the Joint Aviation Authorities document JAR-1 is an aeroplane having no more than two seats, maximum stall speed (VS0) of 35 knots (65 km/h) CAS, and a maximum take-off mass of no more than:

Foot-launched aircraft are excluded from this definition.

In India a microlight is an aircraft that has the following characteristics:

Indian ultralights require aircraft registration, periodic condition inspections and a current permit to fly which has to be renewed annually.[9]

In Italy, the category for this class of aircraft is Microlight.

In New Zealand microlight aircraft are separated into two classes, basically single and two seat aircraft. All microlights are required to have a prescribed endurance testing period when they are first flown, and all microlights must have a minimum set of instrumentation to show airspeed (except powered parachutes), altitude and magnetic heading.

NZ Class 1
Single seat aircraft with a design gross weight of 544 kg (1,199 lb) (landplanes) or 579 kg (1,276 lb) (seaplanes or amphibians), or less, and a stall speed in the landing configuration of 45 knots (83 km/h) or less. Requires aircraft registration, and annual condition inspections, but does not require a permit to fly.

NZ Class 2
Two seat aircraft with a design gross weight of 544 kg (1,199 lb) (landplanes) or 614 kg (1,354 lb) (seaplanes or amphibians), or less, and a stall speed of 45 knots (83 km/h) or less in the landing configuration. Must meet minimum type acceptance standards which may be foreign standards which have been deemed acceptable, or via a temporary permit to fly and flight testing regime. Requires aircraft registration, annual condition inspections, and a current permit to fly.

The Civil Aviation Regulations[13][14] define "non-type certified aircraft", under which ultralights and microlights fall, as:

An aircraft that does not possess an aircraft type certificate issued by any country/state. It is, of simple design and constriction, either a homebuilt or a kit built variety and for recreational and sport use, day VFR condition only.

A class of non-type certificated aircraft is applicable to all classifications, including powered parachutes, gyrocopter, fixed wing aircraft and helicopters.

The UK regulations describe a microlight aeroplane as limited to two people, with a Maximum Total Weight Authorised (MTWA) not exceeding:[15]

A sub-category of microlights (SSDR) was introduced which allows owners more freedom to modify and experiment with their aircraft. Single Seat De-Regulated microlights must weigh less than 115 kg (254 lb) without fuel and pilot and the wing loading must not be more than 10 kg per sq m. There is no airworthiness requirement or annual inspection regime for SSDR microlights although pilots who fly them must have a normal microlight licence, and must observe the rules of the air.[16]

A license is required to fly a microlight in the UK.[17]

The United States FAA's definition of an ultralight is significantly different from that in most other countries and can lead to some confusion when discussing the topic. The governing regulation in the United States is FAR 103 Ultralight Vehicles, which specifies a powered "ultralight" as a single seat vehicle of less than 5 US gallons (19 L) fuel capacity, empty weight of less than 254 pounds (115 kg), a top speed of 55 knots (102 km/h or 64 mph), and a maximum stall speed not exceeding 24 knots (45 km/h or 27.6 mph). Restrictions include flying only during daylight hours and over unpopulated areas. Unpowered "ultralights" (hang gliders, paragliders, etc.) are limited to a weight of 155 lb (70 kg) with extra weight allowed for amphibious landing gear and ballistic parachute systems.[18][19]

In 2004 the FAA introduced the "Light-sport aircraft" category, which resembles some other countries' microlight categories.

In the United States no license or training is required by law for ultralights, but training is highly advisable. For light-sport aircraft a sport pilot certificate is required.

Ultralight aviation is represented by the United States Ultralight Association (USUA), which acts the US aeroclub representative to the Fédération Aéronautique Internationale.

While ultralight-type planes date back to the early 1900s (such as the Santos-Dumont Demoiselle), there have been three generations of modern, fixed-wing ultralight aircraft designs, which are generally classed by the type of structure.

The first generation of modern ultralights were actually hang gliders with small engines added to them, to create powered hang gliders. The wings on these were flexible, braced by wires, and steered by shifting the pilot's weight under the wing.

The second generation ultralights began to arrive in the mid-1970s. These were designed as powered aircraft, but still used wire bracing and usually single-surface wings. Most of these have "2-Axis" control systems, operated by stick or yoke, which control the elevators (pitch) and the rudder (yaw) -- there are no ailerons, so may be no direct control of banking (roll). A few 2-Axis designs use spoilers on the top of the wings, and pedals for rudder control. Examples of 2-Axis ultralights are the "Pterodactyl" and the "Quicksilver MX".

The third generation ultralights, arriving in the early 1980s, have strut-braced wings and airframe structure. Nearly all use 3-Axis control systems, as used on standard airplanes, and these are the most popular. Third generation designs include the CGS Hawk, Kolb Ultrastar and Quad City Challenger.

There are several types of aircraft which qualify as ultralights, but which do not have fixed-wing designs. These include:

Research has been conducted in recent years to replace gasoline engines in ultralights with electric motors powered by batteries to produce electric aircraft. This has now resulted in practical production electric power systems for some ultralight applications. These developments have been motivated by cost as well as environmental concerns. In many ways ultralights are a good application for electric power as some models are capable of flying with low power, which allows longer duration flights on battery power.[20]

In 2007 ElectraFlyer began offering engine kits to convert ultralight weight shift trikes to electric power. The 18 hp motor weighs 26 lb (12 kg) and an efficiency of 90% is claimed by designer Randall Fishman. The battery consists of a lithium-polymer battery pack of 5.6kwh which provides 1.5 hours of flying in the trike application. The power system for a trike costs USD $8285. to $11285. The company claims a flight recharge cost of 60 cents. [20][21]

Historically, ultralights have had a poor safety reputation. Most of the early designs were fragile or unstable, and this resulted in a number of accidents.

As designs matured, pilot error was shown to be the cause of the vast majority of incidents involving ultralights. As a result, most countries now require an Ultralight Pilot's license/certificate, often regulated by one or more officially-delegated pilots' organizations. The United States does not require any training for ultralight pilots; however, experienced ultralighters are nearly unanimous in recommending that no one solo before receiving dual training. Instruction may be given in two-place light-sport versions of the ultralight. An instructor must be certified by the FAA to give dual instruction in a light-sport aircraft.

The build quality and airworthiness of ultralight aircraft (and homebuilt light-sport aircraft in the USA) can now equal that of Certified light aircraft. Some types satisfy both sets of requirements and are available for registration to either Ultralight or Certified status. When registered as an ultralight (or Experimental), the pilot is permitted to do more of the simple maintenance tasks, resulting in a lower cost of operation, although this comes at the cost of restrictions such as avoiding densely populated urban areas, bad weather, or night. Many older pilots are willing to trade these operational restrictions for a lower drain on their retirement incomes, and as a result many ultralights are now flown by experienced General Aviation (GA) pilots or ex-commercial pilots. One other reason for this increase in acceptance is that any pilot is "only one medical away from being an ultralight pilot" -- a reference to the requirement that most other pilots must pass periodic physical examinations, but not to fly ultralights.

Ultralight/microlight aircraft were once regarded as "flying clotheslines", since early aircraft were typically completely open, wire, tube and rag aircraft – these aircraft were seldom used for anything more than local area flying.

However, ultralights are rapidly transforming into high performance aircraft, capable of very respectable speed and range. In recent years there has been a dramatic rise in the number of General Aviation pilots flying high performance ultralights due to the cost benefits.

These aircraft are now often referred to as recreational aircraft.

A rapidly growing area of the class is scale-replica "warbirds", such as the offerings from Titan Aircraft and Loehle Aircraft.