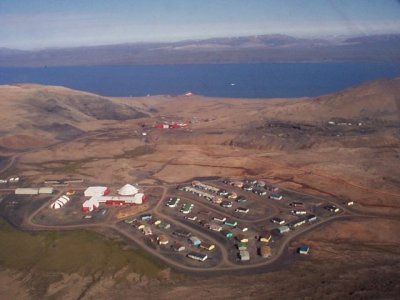 Nanisivik ( translation for "the place where people find things") was a which was built in 1975 to support the - and operations for the , in production between 1976 and 2002. The townsite was located just inland from , about convert|20|km|abbr=on east of the community of Arctic Bay in 's Territory.

There is a port and dock about convert|3.7|km|abbr=on north of the former mine site which was used for shipping concentrate from the site, and receiving supplies (Coord|73|04|08|N|084|32|57|W|display=inline|scale:20000). It is currently used by the for training. [cite web
title= Arcticnet - Naval gazing: Looking for a High Arctic port
url=http://www.arcticnet-ulaval.ca/index.php?fa=News.showNews&home=4&menu=55&sub=1&id=244
format = HTML
accessdate= 2007-08-07]

located convert|8|NM|abbr=on|lk=in south [CFS] is still in operation as the main airport for Arctic Bay. The airport is about convert|19|km|abbr=on directly southeast of Arctic Bay but the road between them is convert|32|km|abbr=on. [ [http://www.gov.nu.ca/Nunavut/English/about/ARCTIC.PDF Arctic Bay and Nanisivik] ]

Since the closure of the mine in 2002, reclamation has been ongoing and the town is abandoned. Residents of Arctic Bay had hoped that the Government of Nunavut would be able to find a new use for the former townsite, potentially a trades training centre. They had also hoped to be able to move some of the buildings and equipment to their community.

On , , reported that documents showed plans to convert the site into a naval station. The plan, which would turn the former mine's existing port into a deepwater facility, would cost $60 million and it was expected that Prime Minister would make an announcement during his stop in Resolute.

On , , Prime Minister Stephen Harper announced construction of a new docking and refueling facility in Nanisivik for the , in an effort to maintain a Canadian presence in Arctic waters during the navigable season (June-October). The choice for Nanisivik as a site was partially based on its location within the eastern entrance to the , and the existence of a deep-water berthing facility at the site, as well as a "jet-capable" airstrip nearby.

Detailed planning for the project began in August 2007, with environmental studies and assessments being carried out in the summer of 2008. Construction at the site is expected to begin in the summer of 2010, with early operating capability available in 2012. The facility is planned to be fully operational by 2015. [cite web
title=Backgrounder - Expanding Canadian Forces Operations in the Arctic
url=http://www.pm.gc.ca/eng/media.asp?id=1785
format =HTML
accessdate= 2007-08-17 [http://www.webcitation.org/query?url=http%3A%2F%2Fwww.pm.gc.ca%2Feng%2Fmedia.asp%3Fid%3D1785&date=2008-08-10 mirror] ]