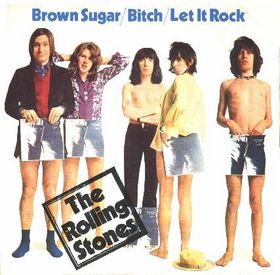 Though credited, like most Stones compositions, to singer and guitarist , the song was primarily the work of Jagger, who wrote it sometime during the filming of "Ned Kelly" in 1969. [ [http://www.rollingstone.com/news/coverstory/mick_jagger_remembers/page/5/ "Jagger Remembers"] . "Rolling Stone". Dec 14, 1995 (accessed 25 April 2007).] Originally recorded over a three day period at in , during December 1969, the song was not released until over a year later due to legal wranglings with the band's former label, though the Stones debuted the number live during the infamous concert at Altamont. In the film "", an alternate mix of the song is played back to Jagger and Richards while they relax in a hotel in Alabama. This version differs from that on record by the inclusion of a rhythmic variation on the familiar introduction for two out of every four bars for that part and it includes a guitar solo by Mick Taylor rather than Bobby Keyes' sax solo.

The song, with its prominent blues-rock riffs, dual horn/guitar instrumental break, and danceable rock rhythms, is representative of the Stones' definitive mid-period and the tough, bluesy hard-rock most often associated with the group. Fact|date=July 2008 However, its lyrical subject matter has often been a point of interest and controversy. Described by rock critic as "a rocker so compelling that it discourages exegesis", [ [http://www.robertchristgau.com/xg/music/stones-76.php Robert Christgau "Rolling Stones"] . "The Rolling Stone Illustrated History of Rock & Roll". 1976 (accessed 24 June 2007).] Brown Sugar's popularity indeed often overshadowed its scandalous lyrics, which were essentially a pastiche of a number of taboo subjects, including , , slave , and less distinctly, , lost , and use. [Unterberger, Richie. [http://www.allmusic.com/cg/amg.dll?p=amg&sql=33:gcfixcq5ldde/ The Rolling Stones "Brown Sugar"] . "allmusic". 2007 (accessed 25 April 2007).]

In the liner notes to the 1993 compilation disc "", Jagger says, "The lyric was all to do with the dual combination of drugs and girls. This song was a very instant thing, a definite high point."

An alternate version was recorded 19 December 1969 at in , after (or during) a birthday party for Richards. It features appearances by on piano, and on lead guitar. It also features Richards singing the first verse, and loudly backing up the rest of the song. The alternate version is widely available on s. Richards considered releasing this version on "Sticky Fingers", mostly for its more spontaneous atmosphere, but decided on the original. [ [http://timeisonourside.com/SOBrown.html The Database "Brown Sugar"] . "Time Is On Our Side". 2007 (accessed 25 April 2007).]

"Brown Sugar" was eventually released in May 1971 as the first single from the album, becoming a number-one hit in the U.S. and a number two hit in the UK and has since become a radio staple. While the US single only featured "Bitch" on the B-side, the UK single featured that track plus a live rendition of Chuck Berry's "Let It Rock", recorded at the during the 1971 tour of the UK.

The song was performed steadily during the Stones' 1970 European Tour, occupying a prominent spot near the end of the even though audiences were unfamiliar with it. It eventually opened the famed 1972 American Tour shows and has been a Stones concert stalwart since.

When the Rolling Stones perform "Brown Sugar" live, Jagger often changes the lyrics from, "Just like a young girl should," to, "Just like a young man should." The line, "Hear him whip the women just around midnight," is often changed to the less offensive, "You shoulda heard him just around midnight." This is evidenced in their live albums "", "Flashpoint", "" and "Shine a Light". This change even occurs on the version recorded at Richards' birthday party.

The song is also notable for being the first single released on , and is one of the two Rolling Stones songs (along with "Wild Horses") licensed to both the band and former manager (a result of various business disagreements) resulting in its inclusion on the compilation album "". "Brown Sugar" is also included on the most significant latter day Stones compilations, "" and "".

The song was later used in a 1998 commercial with a singing a of "Brown Sugar" after sipping on some spilled Pepsi. The commercial was used as part of Pepsi's aggressive ad campaign of switching to a blue background on its cans & bottles after decades of using a white background.