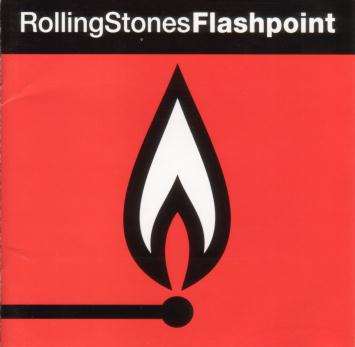 Recorded across , and , "Flashpoint" is also the first Rolling Stones release of the 1990s and, unlike previous live sets, is bolstered by the appearance of two exclusive new studio tracks: "Highwire" and "Sex Drive"; the former was released as a single earlier in and was a comment on the .

Although the live selections are mostly familiar hits mixed in with new tracks from "Steel Wheels", "Flashpoint" does offer up a few obscure songs: "Factory Girl" from 1968's "" and "", originally a #1 UK hit single in 1964 featured here with special guest on guitar.

"Flashpoint" was also The Rolling Stones' final release under their contract, with the band signing a long-term and lucrative worldwide deal with in 1991 - where they remain presently - all, that is, but . After thirty years with the band, the 55-year-old Wyman decided that he had other interests he wanted to pursue and felt that the enormity of the "Steel Wheels" project and tour was fitting to bow out with. Although he would not officially announce his departure until January 1993 - during which time the rest of the band repeatedly asked him to reconsider -he had talked about leaving the band for at least ten years. After his departure, was finally taken off salary and made a full member of the Rolling Stones partnership, 18 years after he joined the band.

"Flashpoint" was released in April 1991 and was generally well-received - with "Highwire" becoming a rock radio hit - and managed to reach #6 in the UK and #16 in the US where it went gold.

In 1998, "Flashpoint" was remastered and reissued by .

All songs by Mick Jagger and Keith Richards, except where noted.