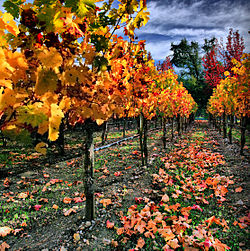 Autumn is one of the four temperate seasons. Autumn marks the transition from summer into winter usually in September (Northern Hemisphere) or March (Southern Hemisphere) when the arrival of night becomes noticeably earlier.

The equinoxes might be expected to be in the middle of their respective seasons, but temperature lag (caused by the thermal latency of the ground and sea) means that seasons appear later than dates calculated from a purely astronomical perspective. The actual lag varies with region. Some cultures regard the autumnal equinox as "mid-autumn", others with a longer lag treat it as the start of autumn.[1] Meteorologists (and most of the temperate countries in the southern hemisphere)[2] use a definition based on months, with autumn being September, October and November in the northern hemisphere,[3] and March, April and May in the southern hemisphere.

In North America, autumn is usually considered to start with the September equinox.[4] In traditional East Asian solar term, autumn starts on or around 8 August and ends on about 7 November. In Ireland, the autumn months according to the national meteorological service, Met Éireann, are September, October and November.[5] However, according to the Irish Calendar which is based on ancient Celtic traditions, autumn lasts throughout the months of August, September, and October, or possibly a few days later, depending on tradition. In Australia, autumn officially begins on March 1st and ends May 31st[6] According to United States unofficial tradition, autumn runs from the day after Labor Day (i.e. the Tuesday following the first Monday of September) through Thanksgiving (i.e. the fourth Thursday in November), after which the holiday season that demarcates the unofficial beginning of winter begins.

The word autumn comes from the Old French word autompne (automne in modern French), and was later normalised to the original Latin word autumnus.[7] There are rare examples of its use as early as the 12th century, but it became common by the 16th century.

Before the 16th century, harvest was the term usually used to refer to the season, as it is common in other West Germanic languages to this day (cf. Dutch herfst and German Herbst). However, as more people gradually moved from working the land to living in towns (especially those who could read and write,  the only people whose use of language we now know), the word harvest lost its reference to the time of year and came to refer only to the actual activity of reaping, and autumn, as well as fall, began to replace it as a reference to the season.[8][9]

The alternative word fall for the season traces its origins to old Germanic languages. The exact derivation is unclear, the Old English fiæll or feallan and the Old Norse fall all being possible candidates. However, these words all have the meaning "to fall from a height" and are clearly derived either from a common root or from each other. The term came to denote the season in 16th century England, a contraction of Middle English expressions like "fall of the leaf" and "fall of the year".[10]

During the 17th century, English emigration to the British colonies in North America was at its peak, and the new settlers took the English language with them. While the term fall gradually became obsolete in Britain, it became the more common term in North America.

Association with the transition from warm to cold weather, and its related status as the season of the primary harvest, has dominated its themes and popular images. In Western cultures, personifications of autumn are usually pretty, well-fed females adorned with fruits, vegetables and grains that ripen at this time. Many cultures feature autumnal harvest festivals, often the most important on their calendars. Still extant echoes of these celebrations are found in the mid-autumn Thanksgiving holiday of the United States and Canada, and the Jewish Sukkot holiday with its roots as a full-moon harvest festival of "tabernacles" (huts wherein the harvest was processed and which later gained religious significance). There are also the many North American Indian festivals tied to harvest of autumnally ripe foods gathered in the wild, the Chinese Mid-Autumn or Moon festival, and many others. The predominant mood of these autumnal celebrations is a gladness for the fruits of the earth mixed with a certain melancholy linked to the imminent arrival of harsh weather.

This view is presented in English poet John Keats' poem To Autumn, where he describes the season as a time of bounteous fecundity, a time of 'mellow fruitfulness'.

While most foods are harvested during the autumn, foods particularly associated with the season include pumpkins (which are integral parts of both Thanksgiving and Halloween) and apples, which are used to make the seasonal beverage apple cider. 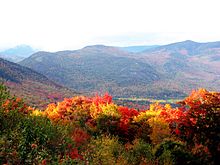 Autumn in poetry has often been associated with melancholy. The possibilities of summer are gone, and the chill of winter is on the horizon. Skies turn grey, and many people turn inward, both physically and mentally.[11]

Similar examples may be found in Irish poet William Butler Yeats' poem The Wild Swans at Coole where the maturing season that the poet observes symbolically represents his own ageing self. Like the natural world that he observes he too has reached his prime and now must look forward to the inevitability of old age and death. French poet Paul Verlaine's "Chanson d'automne" ("Autumn Song") is likewise characterised by strong, painful feelings of sorrow. Keats' To Autumn, written in September 1819, echoes this sense of melancholic reflection, but also emphasises the lush abundance of the season.

In the Anglosphere, most notably in North America and Canada, autumn is also associated with the Halloween season (which in turn was influenced by Samhain, a Celtic autumn festival),[12] and with it a widespread marketing campaign that promotes it, in the U.S.A. The television, film, book, costume, home decoration, and confectionery industries use this time of year to promote products closely associated with such a holiday, with promotions going from early September to 31 October, since their themes rapidly lose strength once the holiday ends, and advertising starts concentrating on Christmas.

Autumn has a strong association with American football, as the regular season begins during September and ends with playoff competition in December or January, in the winter season. Canadian football, on the other hand, begins in the summer, but extends its season through the autumn season and into November. A normal activity for high schools in the US is attending Friday night football games in Autumn, while Sunday afternoons are reserved for the professional game, particularly the National Football League, and Saturdays are traditionally used for college football. The sport is generally geared around fall weather and playing in cold elements.

Television stations and networks, particularly in North America, traditionally begin their regular seasons in autumn, with new series and new episodes of existing series debuting mostly during late September (series that debut outside the fall season are usually known as midseason replacements). A sweeps period takes place in November to measure Nielsen Ratings.

Most schools open in early fall (depending on the region, late August or early September) after summer vacation.

In Indian mythology, autumn is considered to be the preferred season for the goddess of learning Saraswati, who is also known by the name of "goddess of autumn" (Sharada).

Although colour change in leaves occurs wherever deciduous trees are found, coloured autumn foliage is most famously noted in three regions of the world: most of Canada and North America, Eastern Asia (including China, Korea, and Japan), and Europe.

Eastern Canada and New England (a region in North America) are famous for their autumnal foliage,[14][15] and this attracts major tourism (worth billions of U.S. dollars) for the regions.[16][17]