Saraswati
This article is about the goddess in Puranic Hinduism and Buddhism. For the Vedic river or river goddess, see Sarasvati River.

In Hinduism Saraswati (Sanskrit: सरस्वती, Sarasvatī ?, Bengali: সরস্বতী, Shoroshshoti ?, Tamil: சரஸ்வதி, Carasvati ?, is the goddess of knowledge, music, arts, science and technology. She is the consort of Brahma, also revered as His Shakti.[1][2]

The name Saraswati came from "saras" (meaning "flow") and "wati" (meaning "a woman"). So, Saraswati is symbol of knowledge; its flow (or growth) is like a river and knowledge is supremely alluring, like a beautiful woman. She is depicted as beautiful fair Goddess with Four arms, wearing spotless white saree and seated on white lotus. She is also known as "Sharada", "Vani" and "Vagdevi" (both meaning "speech").

Saraswati, known as Sraosha in Zoroastrianism is the guardian of earth. Sraosha (“obedience”) is also the wife and messenger of Ahura Mazda, and her role as the "Teacher of Daena", Daena being the hypostasis of both "Conscience" and "Religion". She also guides the souls of the deceased to find their way to the afterlife. Her symbolic animal is the cock, whose crowing calls the pious to their religious duties. She is also called Druga for fighting off Drug (Drug, the name for female demon in ancient Veda, from the Sanskrit root druh "to be hostile"). The name Druga is made of Sanskrit dru or dur "with difficulty" and gā or jā ("come", "go"). Saraswati is known as a guardian deity in Buddhism who upholds the teachings of Gautama Buddha by offering protection and assistance to practitioners. She is known in Burmese as Thurathadi (သူရဿတီ, pronounced [θùja̰ðədì] or [θùɹa̰ðədì]) or Tipitaka Medaw (တိပိဋကမယ်တော်, pronounced [tḭpḭtəka̰ mɛ̀dɔ̀]), Chinese as Biàncáitiān (辯才天), in Thai as Surasawadee (สุรัสวดี) and in Japanese as Benzaiten (弁才天/弁財天).

In the East Indian states of Bihar, West Bengal, Orissa Saraswati is considered to be a daughter of Durga along with her sister Lakshmi and her brothers Ganesha and Karthikeya.[3] 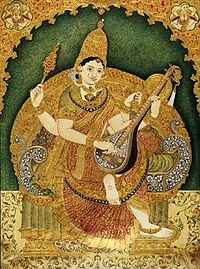 In the Rigveda, Saraswati is a river as well as its personification as a goddess. In the post-Vedic age, she began to lose her status as a river goddess and became increasingly associated with literature, arts, music, etc. In Hinduism, Saraswati represents intelligence, consciousness, cosmic knowledge, creativity, education, enlightenment, music, the arts, eloquence and power. Hindus worship her not only for "academic knowledge", but for "divine knowledge" essential to achieve moksha.

In some Puranas (like Skanda Purana) she is daughter of Shiva (Shivaanujaa) and in some Tantras with Ganesha. However across India she is worshipped as the wife of Lord Brahma. In the Devi Mahatyam it mentions her as Brahmapatni. According to some sects Saraswati was born from the left body part of Vishnu when Vishnu was in his eternal sleep.

The original (spiritual) forms of devas including Saraswati are present in the spiritual world:

In the center reside the deities of fire, sun and moon, Kurma-avatara, Ananta Sesha, and Garuda, the master of the three Vedas. The Vedic hymns and all sacred mantras also stay in that holy place, which is made of all the Vedas, and which is known in the Smriti-sastra [Scriptures of Remembrance] as the yoga-pitha [Sanctuary of Union]. (Padma Purana Uttara-khanda 256.23)

Accompanied by Lakshmi and other associates, the chatur-vyuha [Four Expansions] headed by Lord Vasudeva are manifest in the eight directions, beginning with the east. In the directions beginning with the southeast, the palaces of Lakshmi, Saraswati, Rati, and Kanti respectively are situated.[4][clarification needed]
According to Vedanta she is considered to be the feminine energy and knowledge aspect (Shakti) of Brahma, as one of many aspects of Adi Shakti.

In the Devi Mahatmya, Saraswati is in the trinity of Maha Kali, Maha Lakshmi and Maha Saraswati. She is depicted as eight-armed.

Her dhyāna shloka given at the beginning of the Fifth chapter of Devi Mahatmya is:

Wielding in her lotus-hands the bell, trident, ploughshare, conch, pestle, discus, bow, and arrow, her lustre is like that of a moon shining in the autumn sky. She is born from the body of Gowri and is the sustaining base of the three worlds. That Mahasaraswati I worship here who destroyed Sumbha and other asuras.[5]

Nilasaraswati is another form of Mahavidya Tara. There are separate dhyana shlokas and mantras for her worship in Tantrasara.[6]

Saraswati is known as a guardian deity in Buddhism who upholds the teachings of Gautama Buddha by offering protection and assistance to practitioners.

The goddess Saraswati is often depicted as a beautiful woman dressed in pure white often seated on a white lotus, which symbolizes that she is founded in the experience of the Absolute Truth. Thus, she not only has the knowledge but also the experience of the Highest Reality. She is mainly associated with the color white, which signifies the purity of true knowledge. Occasionally, however, she is also associated with the colour yellow, the colour of the flowers of the mustard plant that bloom at the time of her festival in the spring. She is adorned with simple jewels and gold, unlike the goddess Lakshmi; representing her preference of knowledge over worldly material things.[7]

She is generally shown to have four arms, which represent the four aspects of human personality in learning: mind, intellect, alertness, and ego. Alternatively, these four arms also represent the 4 Vedas, the primary sacred books for Hindus. The Vedas, in turn, represent the 3 forms of literature:

The four hands also depict this thus — prose is represented by the book in one hand, poetry by the garland of crystal, music by the veena. The pot of sacred water represents purity in all of these three, or their power to purify human thought.

She is shown to hold the following in her hands:

The beautiful human form of Saraswati comes to the fore in this English translation of the Saraswati hymn:

"May Goddess Saraswati, who is fair like the jasmine-colored moon, and whose pure white garland is like frosty dew drops, who is adorned in radiant white attire, on whose beautiful arm rests the veena, and whose throne is a white lotus,who is surrounded and respected by the Gods, protect me.May you fully remove my lethargy, sluggishness, and ignorance."[8]

A hamsa or swan is often located next to her feet. The sacred bird, if offered a mixture of milk and water, is said to be able to drink the milk alone. It thus symbolizes discrimination between the good and the bad or the eternal and the evanescent. Due to her association with the bird, Saraswati is also referred to as Hamsavahini, which means "she who has a hamsa as her vehicle".

She is usually depicted near a flowing river, which may be related to her early history as a river goddess.

Sometimes a peacock is shown beside the goddess. The peacock represents arrogance and pride over its beauty, and by having a peacock as her mount, the Goddess teaches not to be concerned with external appearance and to be wise regarding the eternal truth.

In Hindu beliefs, great significance is attached to offering honey to this goddess, as honey is representative of perfect knowledge. Hymns dedicated to her include Saraswati Vandana Mantra. 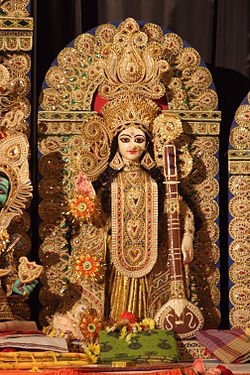 In the eastern part of India—Orissa, West Bengal, Bihār and Assam,—Saraswati Puja is celebrated in the Magha month (January–February). It coincides with Vasant Panchami or Shree Panchami i.e. the 5th day of the bright fortnight of the lunar month of Magha. People place books near the Goddess' statue or picture and worship the Goddess. Book reading is not allowed on this day.

In the southern states of India, Saraswati Puja is conducted during the Navaratri. Navaratri literally means “Nine Nights”. But the actual celebrations continue during the 10th day which is considered as Vijaya Dashami or the Victorious Tenth Day. Navaratri starts with the new moon day of the bright fortnight of the Sharad Ritu (Sharad Season of the six seasons of India) during September–October. The festival celebrates the power of the feminine aspect of divinity or shakti. The last two or three days are dedicated to Goddess Saraswati in South India.

The Gnana Saraswathi Temple in Basar, Andhra Pradesh on the banks of river Godavari is considered only one of 2 temples in India dedicated to the Goddess.

In Tamil Nadu, Sarasvati Puja is conducted along with the Ayudha Puja (the worship of weapons, and implements including machines). On the ninth day of Navaratri, i.e. the Mahanavami day, books and all musical instruments are ceremoniously kept in front of the Goddess Sarasvati early at dawn and worshipped with special prayers. No studies or any performance of arts is carried out, as it is considered that the Goddess herself is blessing the books and the instruments. The festival concludes on the tenth day of Navaratri (Vijaya Dashami) and the Goddess is worshipped again before the books and the musical instruments are removed. It is customary to start the study afresh on this day, which is called Vidyarambham (literally, Commencement of Knowledge).

In Kerala, the last three days of the Navaratri festival, i.e. Ashtami, Navami, and Dashami are celebrated as Sarasvati Puja. The celebrations start with the Puja Veypu (Placing for Worship). It consists of placing the books for Pooja on the Ashtami day. It may be in one’s own house, in the local Nursery School run by traditional teachers, or in the local temple. The books will be taken out for reading, after worship, only on the morning of the third day (Vijaya Dashami). It is called Puja Eduppu (Taking [from] Puja). Children are happy since they are not expected to study on these days. On the Vijaya Dashami day, Kerala celebrates the Ezhuthiniruthu or Initiation of Writing for the little children before they are admitted to nursery schools. This is also called Vidyarambham. The child is made to write for the first time on the rice spread in a plate with the index finger, guided by an elder of the family or by a reputed teacher. The little ones will have to write “Hari Shri Ganapataye Namah” and recite the same to mark the auspicious entry in to the world of education. This is considered a memorable event in the life of a person. In some parts of Kerala bordering Tamil Nadu, Ayudha Puja is also conducted during this period.

In India it is customary that, out of respect, when a person's foot accidentally touches a book or any written material (which are considered a manifestation of Saraswati) or another person's leg, it will be followed by an apology in the form of a single hand gesture (Pranāma) with the right hand, where the offending person first touches the object with the finger tips and then the forehead and/or chest. This also counts for money, which is considered a manifestation of the goddess of wealth Lakshmi.[9]