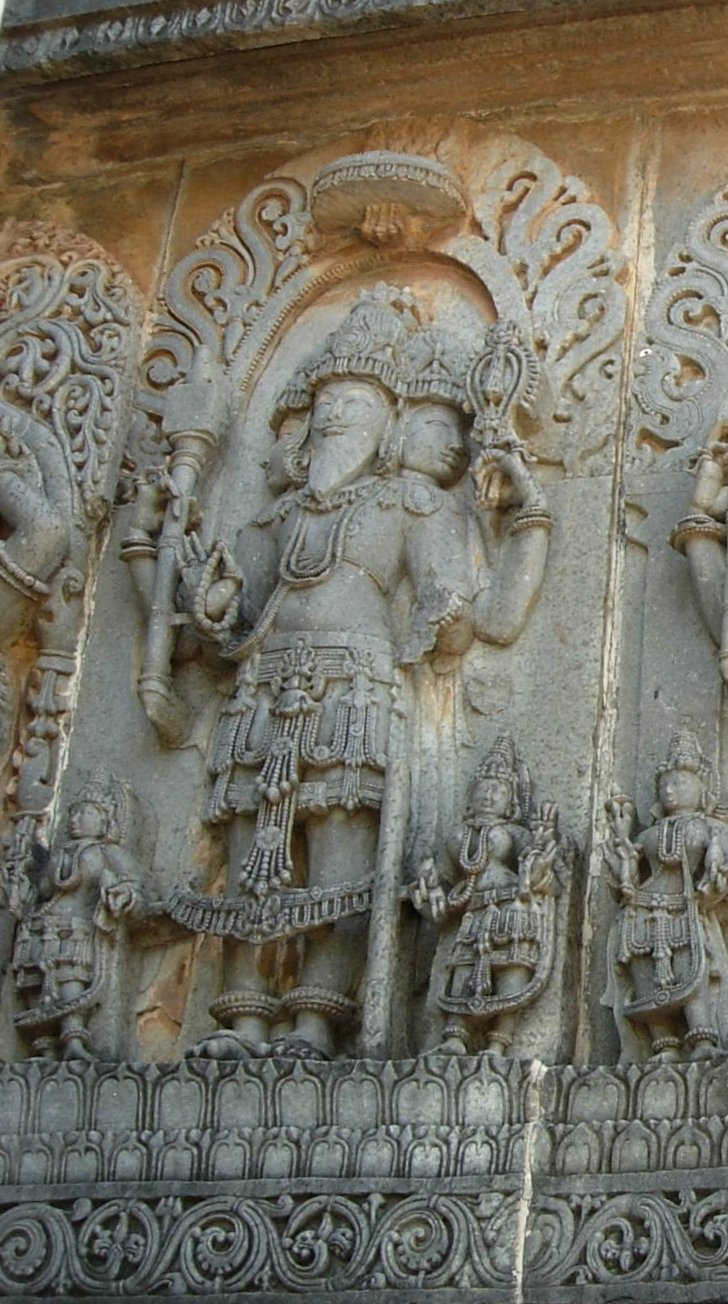 Brahma is the Hindu god (deva) of creation and one of the , the others being and . He is not to be confused with the Supreme Cosmic Spirit in Hindu philosophy known as . Brahmā's consort is , the goddess of learning. Brahmā is often identified with , a Vedic deity.

In grammar, "IAST|brahmā" _sa. ब्रह्मा is the nominative of the generic neuter "".

At the beginning of the process of creation, Brahmā created eleven "Prajapatis" (used in another sense), who are believed to be the fathers of the human race. The "Manusmriti" enumerates them as "Marici", "Atri", "Angiras", "Pulastya", "Pulaha", "Kratuj", "Vashishta", "Pracetas" or "Daksha", "Bhrgu", and "Narada"Fact|date=January 2008. He is also said to have created the seven great sages or the "Saptarishi" to help him create the universe. However since all these sons of his were born out of his mind rather than body, they are called "Manas Putras" or mind-sons or spirits.

Within Vedic and Puranic scripture Brahmā is described as only occasionally interfering in the affairs of the other devas (gods), and even more rarely in mortal affairs. He did force to give Tara back to her husband, . He is considered the father of and .

According to the s, Brahma is self-born (without mother) in the lotus flower which grew from the of at the beginning of the universe. This explains his name "Nabhija" (born from the navel). Another legend says that Brahmā was born in water. In this he deposited a seed that later became the golden egg. From this golden egg, Brahma the creator was born, as "". The remaining materials of this golden egg expanded into the Brahm-anda or Universe. Being born in water, Brahmā is also called "Kanja" (born in water). Brahmā is said also to be the son of the Supreme Being, "Brahman" and the female energy known as or Maya.

Lack of Brahma worship in India

Although Brahma is one of the major gods in Hinduism, few Hindus actually worship him.India today has very few temples dedicated to Brahma alone as opposed to the thousands of temples dedicated to the other deities in the Trimurti: and . However, among those that are, the most famous is in in . Others include one in
village in of district in known as , Brahma-Karmali village in in , one in in and one in the village of Khokhan in the Valley, 4 km from .

There are various stories in Hindu mythology that talk of the curse that has prevented Brahma from being worshipped on Earth.

At the beginning of time in Cosmos, Vishnu and Brahmā approached a huge Shiva and set out to find its beginning and end. Vishnu was appointed the end, and Brahma the beginning. Each took their journey, Vishnu took the form of a boar and began digging downwards into the earth while Brahma took on the shape of a swan began flying upwards. But neither could find their appointed destination. Vishnu, satisfied, came up to Shiva and bowed down to him as a swarupa of . Brahmā did not give up so easily. As he was going up, he saw a flower, dear to Shiva. His ego forced him to ask the flower to bear false witness of Brahmā's finding Shiva's beginning. When Brahmā told his tale, Shiva, the all-knowing, was angered by the former's ego. Shiva thus cursed him that no being in the three worlds will worship him.

According to another legend, Brahmā is not worshiped because of a curse by the great sage . Once a great fire-sacrifice () was being organised on Earth with Bhrigu being the high priest. It was decided that the greatest among all Gods would be made the presiding deity. Bhrigu then set off to find the greatest among the Trinity. When he went to Brahmā, he was so immersed in the music played by that he could hardly hear Bhrigu's calls. The enraged Bhrigu then cursed Brahmā that no person on Earth would ever invoke him or worship him again.

According to and Hindu cosmology, Brahmā is the creator but not necessarily regarded as God in Hinduism. He is mostly regarded as a creation of God / . The lifespan of Brahmā is 100 Brahmā years or 311 trillion, 40 billion human years. At the end of his lifespan, there is a gap of 100 Brahmā years after which another Brahmā or creator begins anew and the process is repeated forever. For this reason, Brahmā might be considered only as a creator who is the executor of the order from the Supreme being - The Brahman.

Brahma is traditionally depicted with four heads and four faces and four arms. With each head he continually recites one of the four . He is often depicted with a white beard (especially in North India), indicating the near eternal nature of his existence. He is shown as having four arms, with none holding a weapon, unlike most other Hindu Gods. One of his hands is shown holding a scepter in the form of a spoon, which is associated with the pouring of holy ghee or oil into a sacrificial pyre, indicating that Brahma is the lord of sacrifices. Another of his hands holds a water-pot (sometimes depicted as a coconut shell containing water). The significance of the water is that it is the initial, all-encompassing ether in which the first element of creation evolved. Brahma also holds a string of prayer beads that he uses to keep track of the Universe's time. He also is shown holding the Vedas, and sometimes, a lotus flower.

Another story in connection with Brahma's four heads is that when Brahmā was creating the universe, he made a female deity known as Shatarupā (one with a hundred beautiful forms). Brahmā became immediately infatuated. Shatarupā moved in various directions to avoid the gaze of Brahmā. But wherever she went, Brahmā developed a head. Thus, Brahmā developed five heads, one on each side and one above the others. In order to control Brahmā, Shiva cut off the top head. Also, Shiva felt that Shatarupā was Brahmā's daughter, being created by him. Therefore, Shiva determined, it was wrong for Brahmā to become obsessed with her. He directed that there be no proper worship on earth for the "unholy" Brahmā. Thus, only Vishnu and Shiva continue to be worshipped, while Brahmā is almost totally ignored. Ever since the incident, Brahmā has been reciting the four Vedas in his attempt at repentance.

The - Symbolizes the substances used in the progress of creation.

The Gold - symbolizes activity in the universe and the golden face of Brahma indicates that the Lord is active when involved in the process of creation.

The Swan - The Swan symbolizes the power of discrimination. Brahma uses the swan as a vehicle.

The Crown - The crown on the head implies that the Brahma has supreme authority.

The Lotus - Lotus symbolizes the nature and living essence of all things and beings in the universe.

Brahma's vehicle is a divine . This divine bird is bestowed with a virtue called Neera-Ksheera Viveka or the ability to separate milk and water from a mixture of the two. The significance of this is that justice should be dispensed to all creatures, however entwined it might be in a situation. Also, this virtue indicates that one should learn to separate the good from the evil and then accept that which is valuable and discard that which is worthless or evil.

Although Brahmā is prayed to in almost all Hindu religious rites, there are very few temples dedicated to him in India, the more prominent of which is at , close to . Once a year, on the full moon night of the Hindu lunar month of Kartika (October - November), a religious festival is held in Brahmā's honour. Thousands of pilgrims come to bathe in the holy lake adjacent to the temple.

There are also temples in village in of district in known as , Goa, (in the small, remote village of Carambolim in the Sattari taluka in the northeast region of the state); in the temple town of Kumbakonam, (Thanjavur District) in Tamil Nadu; and in Thirunavaya in . Regular s are held for Brahma and during Navrathris, this temple comes to life with colourful festivities. There is also a shrine for Brahma within the Bramhapureeshwarar temple in , near Trichy and a famous of Brahmā at Mangalwedha, 52 km from district in , the largest of which is in in Cambodia. In , , there is a statue of Brahma.A six feet tall statue was also discovered at near . There is a temple dedicated to Lord Brahma in the temple town of Sri Kalahasti near Tirupati in Andhra Pradesh

The importance of Brahma/Brahman to the Buddhism of is evident in the "" (Sanskrit: "catvāri brahma-vihārāḥ"). It has been asserted by current secular Buddhism, that Buddhism knows only of the gods (Brahma) and nothing of the Godhead/Absolute/Agathon Brahman. In actuality there can be doubt that in the grammatically ambitious _expression Brahmabhu’to (attano) which describes the condition of those who are wholly liberated, that it is Brahman (the Absolute) and not Brahma (deva, or mere god) that is in the text and must be read; for it is by Brahman that one who is “wholly awake” has ”become.” The highest appellation in Buddhist Nikayan sutra is “Brahambhutena attano” [MN 1.341] “The Soul is having become Brahman”; absolutely equivalent to ‘Tat tvam asi’ (That/Brahman, thou art). For the Buddha himself is = Brahmabhu’to (Become That, Brahman). For (1) the comparatively limited knowledge of a Brahma is repeatedly emphasized, and (2) Brahmas are accordingly the Buddhas pupils, not he theirs [S 1.141-145; Mil 75-76] , (3) The Buddha had already been in previous births a Brahma (god) and a Mahabrahma [AN 4.88] hence it is meaningless and absurd in the equation to say Brahmabhu’to=Buddho [AN 5.22; DN 3.84; It 57 etc.] , to assume that Brahman= Brahma (god) and that (4) the Buddha is explicitly “much more than a Mahabrahma" [DhA 2.60] .
* [DN 3.84] "The Tathagata means 'the body of Brahman', 'become Brahman'." (this passage also proves [from earlier context] that Brahma (god/s) is utterly different than the word Brahman).
* [DN 1.249] “ I teach the way to the union with Brahman, I know the way to the supreme union with Brahman, and the path and means leading to Brahman, whereby the world of Brahman may be gained.”
* [DN 1.248] ”all the peoples say that Gotama is the supreme teacher of the way leading to the Union with Brahman!”
* [3.646 Pat-Att.] “To have become Brahman [is the meaning of] Brahmabhuto.”
* [Atthakanipata-Att. 5.72] “To become Brahman is to become highest Svabhava (Self-nature).”
* [It 57] “Become-Brahman is the meaning of Tathagata.”
* [SN 3.83] “Without taints, it meant ‘Become-Brahman’.”
* [SN 5.5] “The Aryan Eightfold Path is the designation for Brahmayana (path to Brahman).”
* [MN 1.341] “The Soul is having become Brahman.”
* [SN 4.117] "Found the ancient path leading to Brahman."

Synonyms:
The Creator, the Creative deity, the Formative Energy in God