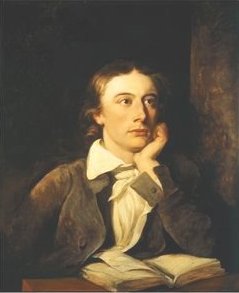 John Keats (IPAEng|ˈkiːts; 31 October 1795 – 23 February 1821) was one of the principal poets of the English Romantic movement. During his short life, his work received constant critical attacks from periodicals of the day, but his posthumous influence on poets such as has been immense. Elaborate word choice and sensual imagery characterize Keats's poetry, including a series of s that were his masterpieces and which remain among the most popular poems in . Keats's letters, which expound on his aesthetic theory of "" [ [http://books.google.com/books?id=wIs6AAAAMAAJ&printsec=frontcover&dq=Negative+Capability#PPA277,M1 The Complete Poetical Works of John Keats edited by Horace Elisha Scudder, Boston: Riverside Press, 1899. p. 277] ] , are among the most celebrated by any writer.

John Keats was born in 1795 at 85 in London, where his father, Thomas Keats, was an . The pub is now called 'Keats at the Globe', only a few yards from . Keats was baptised at and lived happily for the first seven years of his life. The beginnings of his troubles occurred in 1804, when his father died of a fractured skull after falling from his horse. A year later, in 1805, Keats' grandfather died. His mother, Frances Jennings Keats, remarried soon afterwards, but quickly left the new husband and moved herself and her four children (a son had died in infancy) to live with Keats's grandmother, Alice Jennings. There, Keats attended a school that first instilled a love of literature in him. In 1810, however, his mother died of , leaving him and his siblings in the custody of their grandmother.

Keats's grandmother appointed two guardians to take care of her new "charges", and these guardians removed Keats from his old school to become a surgeon's apprentice at Thomas Hammond's apothecary shop in Edmonton [ [http://anidea.co.uk/lower-edmonton/local/churchst.html Church Street, Edmonton, London] Retrieved 2 April 2008] (now part of the ). This continued until 1814, when, after a fight with his master, he left his apprenticeship and became a student at Guy's Hospital (now part of ). During that year, he devoted more and more of his time to the study of literature. Keats traveled to the in the spring of 1819, where he spent a week. Later that year he stayed in . It was here that Keats wrote Isabella, St. Agnes' Eve and Lamia. Parts of Hyperion and the five-act poetic tragedy Otho The Great were also written in Winchester.

Following the death of his grandmother, he soon found his brother, Tom Keats, entrusted to his care. Tom was suffering, as his mother had, from . Finishing his epic poem "Endymion", Keats left to work in Scotland and Ireland with his friend . However, he too began to show signs of tuberculosis infection on that trip, and returned prematurely. When he did, he found that Tom's condition had deteriorated, and that "Endymion" had, as had "Poems" before it, been the target of much abuse from the critics. On 1 December 1818, Tom Keats died of his disease, and John Keats moved again, to live in Brown's house in , next to

This relationship was cut short when, by 1820, Keats began showing serious signs of tuberculosis, the disease that had plagued his family. On the suggestion of his doctors, he left the cold airs of London behind and moved to Italy with his friend . Keats moved into a house, which is now a museum that is dedicated to his life and work, The Keats-Shelley House, on the , in Rome, where despite attentive care from Severn and Dr. John Clark, the poet's health rapidly deteriorated. He died in 1821 and was buried in the . His last request was to be buried under a reading, "Here lies one whose name was writ in water." His name was not to appear on the stone. Despite these requests, however, Severn and Brown also added the epitaph: "This Grave contains all that was mortal, of a YOUNG ENGLISH POET, who on his Death Bed, in the Bitterness of his heart, at the Malicious Power of his enemies, desired these words to be Engraven on his Tomb Stone" along with the image of a lyre with broken strings.

Shelley blamed his death on an article published shortly before in the "", with a scathing attack on Keats's "Endymion". The offending article was long believed to have been written by , though later shown to be the work of . Keats's death inspired Shelley to write the poem "".'; later composed a short poem on this theme using the phrase "snuffed out by an article." However Byron, far less admiring of Keats's poetry than Shelley and generally more cynical in nature, was here probably just as much poking fun at Shelley's interpretation as he was having a dig at his old fencing partners the critics. (see below, Byron's other less than serious poem on the same subject).

The largest collection of Keats's letters, manuscripts, and other papers is in the at Harvard University. Other collections of such material can be found at the ; , Hampstead; The Keats-Shelley House, Rome; and the in New York.