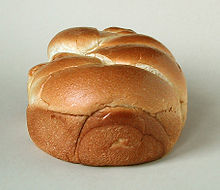 The Maillard reaction (French pronunciation: [majaʁ], mah-yar) is a form of nonenzymatic browning similar to caramelization. It results from a chemical reaction between an amino acid and a reducing sugar, usually requiring heat.

Vitally important in the preparation or presentation of many types of food, it is named after chemist Louis-Camille Maillard, who first described it in the 1910s while attempting to reproduce biological protein synthesis.[1](p79)

The reactive carbonyl group of the sugar reacts with the nucleophilic amino group of the amino acid, and forms a complex mixture of poorly-characterized molecules responsible for a range of odors and flavors. This process is accelerated in an alkaline environment, as the amino groups are deprotonated and, hence, have an increased nucleophilicity. The type of the amino acid determines the resulting flavor. This reaction is the basis of the flavoring industry. At high temperatures, acrylamide can be formed.

In the process, hundreds of different flavor compounds are created. These compounds, in turn, break down to form yet more new flavor compounds, and so on. Each type of food has a very distinctive set of flavor compounds that are formed during the Maillard reaction. It is these same compounds flavor scientists have used over the years to make reaction flavors.

Foods and products with Maillard reactions

The Maillard reaction is responsible for many colors and flavors in foods:

6-Acetyl-2,3,4,5-tetrahydropyridine is responsible for the biscuit or cracker-like flavor present in baked goods like bread, popcorn, and tortilla products. The structurally-related compound 2-acetyl-1-pyrroline has a similar smell, and occurs also naturally without heating and gives varieties of cooked rice and the spice pandan (Pandanus amaryllifolius) their typical smells. Both compounds have odor thresholds below 0.06 ng/l.[3]

The browning reactions that occur when meat is roasted or seared are complicated, and occur mostly by Maillard browning[2] with contributions from other chemical reactions, including the breakdown of the tetrapyrrole rings of the muscle protein myoglobin.

Caramelization is an entirely different process from Maillard browning, though the results of the two processes are sometimes similar to the naked eye (and tastebuds). Caramelization may sometimes cause browning in the same foods in which the Maillard reaction occurs, but the two processes are distinct. They both are promoted by heating, but the Maillard reaction involves amino acids, as discussed above, whereas caramelization is simply the pyrolysis of certain sugars. The following things are a result of the Maillard browning reaction:

In making silage, excess heat causes the Maillard reaction to occur, which reduces the amount of energy and protein available to the animals who feed on it.

The Maillard reaction also occurs in the human body. It is a step in the formation of advanced glycation endproducts (AGEs).[6] It is tracked by measuring pentosidine. Although the Maillard reaction has been studied most extensively in foods, it has also shown a correlation in numerous different diseases in the human body, in particular degenerative eye diseases. In general, these diseases are due to the accumulation of AGEs on nucleic acids, proteins, and lipids. Though AGEs have numerous origins, they can form from the oxidation and dehydration of Amadori adducts, which themselves are products of nonenzymatic Maillard reactions. Apart from ocular diseases, whose correlation with Maillard chemistry has been more recently studied, the formation of AGEs has also proven to contribute to a wide range of human diseases that include diabetic complications, pulmonary fibrosis, and neurodegeneration.

Receptor systems in the body have been suggested to have evolved to remove glycation-modified molecules, such as AGEs, to eliminate their effects. The adverse effects of AGE accumulation appear to be mediated by numerous different AGE receptors. Examples include AGE-R1, galectin-3, CD36, and, most noted, RAGE, the receptor for AGEs.

Advanced glycation in numerous different locations within the eye can prove detrimental. In the cornea, whose endothelial cells have been known to express RAGE and galectin-3, the accumulation of AGEs is associated with thickened corneal stroma, corneal edema, and morphological changes within patients with diabetes. Within the lens, Maillard chemistry has been studied extensively in the context of cataract formation. Advanced glycation is known to alter fiber membrane integrity in the lens, and dicarbonyl compounds are known to cause increased aggregate formation within the lens. This effect is exacerbated by both diabetes and aging. Furthermore, it is thought that AGE-inhibiting compounds are effective in preventing cataract formation in diabetics.

Glycation in Maillard reactions may lead to destabilization of the vitreous gel structure within the eye via unnecessary cross-linking between collagen fibrils. Again, this process is more strongly observed within diabetic patients. Within the retina, the accumulation of AGEs in the Drusen and Bruch’s membrane has been associated with age, and has also been observed at a higher level among patients with age-related macular degeneration (AMD). This is manifested by the thickening of the Bruch’s membrane. Furthermore, it has been observed that AGE levels increase with age within the lamina cribosa, and the products of the Maillard reaction have been observed there, as well.

A wide range of ocular diseases, particularly diabetic retinopathy, may be prevented by the inhibition of the Maillard reaction. This may be achieved in numerous ways: preventing the formation of AGEs, reducing the effectiveness of the AGE signaling pathway and the receptor-ligand interactions, or breaking the AGE crosslinks. This latter method has already been achieved to some extent by the breaker ALT-711, though its effectiveness against retinopathy is unknown. Another method is by the use of amadorins, which are able to prevent the reaction of Amadori intermediates, which form into AGEs by scavenging the reactive carbonyls.[7]