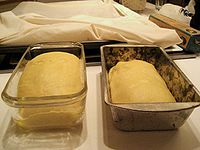 Proofing (also called proving), as the term is used by professional bakers, is the final dough-rise step before baking, and refers to a specific rest period within the more generalized process known as fermentation. Fermentation is a step in creating yeast breads and baked goods where the yeast is allowed to leaven the dough.

Fermentation rest periods are not often explicitly named, and normally appear in recipes as "Allow dough to rise."

In a less-specific sense with usage reminiscent to fermentation, proofing refers to yeasts' feeding on some type of sugar. As the term is used in some cookbooks intended for home use, it refers to testing the viability of one's yeast by mixing it with a small amount of warm water and sugar, and waiting until the mixture becomes foamy by the action of the yeast. Typically, using US customary units, ¼ cup (≈ 59.1 mL) water at 105–115 °F (41–46 °C) and ½ teaspoon (≈ 2.5 mL) of sugar are used.[1] While this sugar may be sucrose, instead it may be glucose, typically enzyme-derived from starch.[2]

Proofing yeast may refer to the process of first dissolving yeast in warm water,[3] a needed hydration step when using Active Dry Yeast.[4][5] To hydrate the yeast, the weight of water required may be calculated: yeast weight x 4 = water weight.[5] In one variant of the sponge technique known as poolish, proofing the yeast is the process step prior to feeding the yeast any carbohydrate.[6] 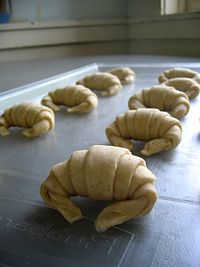 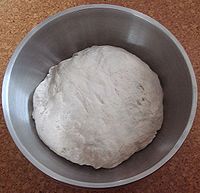 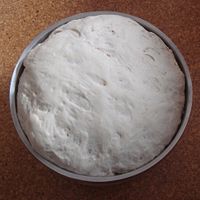 The process of making yeast-leavened bread involves a series of alternating work and rest periods. Work periods occur when the dough is manipulated by the baker. Some work periods are called mixing, kneading, and folding, as well as division, shaping, and panning. Work periods are typically followed by rest periods, these occur when dough is allowed to sit undisturbed. Particular rest periods include, but are not limited to, autolyse, bulk fermentation and proofing. Proofing, also sometimes called final fermentation, is the specific term for allowing dough to rise after it has been shaped and before it is baked.

Autolyse is an optional dough process. It refers to a period of rest after the initial mixing of flour and water, a rest period that occurs sequentially before the addition of yeast and other ingredients.[7][8] This rest period allows for better absorption of water and helps the gluten and starches to align. Breads made with autolysed dough are easier to form into shapes and have more volume and improved structure.

Fermentation typically begins when viable yeast or a starter culture is added to flour and water. During fermentation, yeast converts glucose and other carbohydrates to carbon dioxide gas which makes the dough rise, and alcohol which gives the baked bread flavor.

Depending on a bread's recipe, different bread varieties will have different process requirements. These are generally classified as either straight or sponge dough processes. Some straight doughs will only require a single mixing period while others, particularly sponge doughs, will need multiple periods.[9] Between rest stages of fermentation recipes will often instruct a cook to "punch down" or "deflate" the dough to expel gas from carbon-dioxide bubbles which have formed.

Overproofing occurs when a fermenting dough has rested too long. Its bubbles have grown so large that they've popped and tunneled, and if baked at this point would result in poor structure. Length of rest periods, including proofing, can be determined by time at specific temperatures or by characteristics. Often the "poke method" is used to determine if a dough has risen long enough. If the dough, when poked, springs back immediately it is underproofed and needs more time.

Retarding may occur at any time during fermentation and is accomplished by placing the dough into a dough retarder, refrigerator, or other cold environment to slow the activity of the yeast. The retarding stage is often used in sourdough bread recipes to allow the bread to develop its characteristic flavor. A cold fermentation stage is sometimes used to develop flavor in other artisan breads, with a part of the dough ("pre-ferment") before the final mixing, with the entire dough during bulk fermentation, or in the final fermentation stages after shaping. 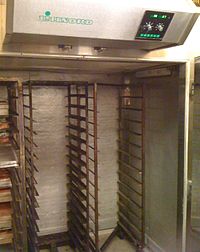 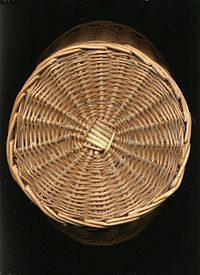 A banneton basket viewed from below.

To ensure consistent results, specialized tools are used to manipulate the speed and qualities of fermentation.

A dough proofer is a chamber used in baking that encourages fermentation of dough by yeast through warm temperatures and controlled humidity. The warm temperatures increase the activity of the yeast, resulting in increased carbon dioxide production and a higher, faster rise. Dough is typically allowed to rise in the proofer before baking.

A dough retarder is a refrigerator used to control the fermentation of yeast when proofing dough. Lowering the temperature of the dough produces a slower, longer rise with more varied fermentation products, resulting in more complex flavors. In sourdough bread-making, cold decreases the activity of wild yeast relative to the Lactobacilli,[10] which produce flavoring products such as lactic acid and acetic acid. Dough that is retarded before baking results in a more sour loaf. To prevent the dough from drying, air flow in the dough retarder is kept to a minimum. Home bakers may use cloth to cover dough that is kept for a longer period in the refrigerator.

A banneton is a type of basket used to provide structure for the sourdough breads during proofing. Proofing baskets are distinct from loaf pans in that the bread is normally removed from these baskets before baking. Traditionally these baskets are made out of wicker, but many modern proofing baskets are made out of silicone or plastic. Frequently a banneton will have a cloth liner to prevent dough from sticking to the sides of the basket - though some have no such cloth. These baskets are used both to provide the loaf with shape and to wick moisture from the crust. Banneton baskets are also known as Brotform or proofing baskets. Alternatively, a couche or proofing cloth can be used to proof dough on or under. Couche are generally made of linen or other coarse material which the dough will not stick to and are left unwashed so as to let yeast and flour collect in them, aiding the proofing process. A banneton is used for round loaves, called boules, and a couche is typically used for longer loaves such as baguettes.