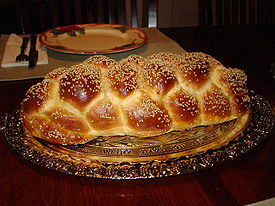 According to Jewish tradition, the three Sabbath meals (Friday night, Saturday lunch, and Saturday late afternoon) and two holiday meals (one at night and lunch the following day) each begin with two complete loaves of bread.[3] This "double loaf" (in Hebrew: lechem mishneh) commemorates the manna that fell from the heavens when the Israelites wandered in the desert for forty years after the Exodus from Egypt. The manna did not fall on the Sabbath or holidays; instead, a double portion would fall the day before the holiday or sabbath.[4] 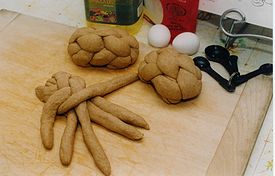 Traditional challah recipes use a large number of eggs, fine white flour, water, yeast, and sugar. Modern recipes may use fewer eggs (there are also eggless versions) and may replace white flour with whole wheat, oat, or spelt flour. Sometimes honey or molasses is substituted as a sweetener. The dough is rolled into rope-shaped pieces which are braided and brushed with an egg wash before baking to add a golden sheen. Sometimes raisins are added. Some bakers like to sprinkle sesame or poppy seeds on top for flavor.

Challah is usually parve (containing neither dairy nor meat, important in the laws of Kashrut), unlike brioche and other enriched European breads, which contain butter or milk.

Main article: The Mitzvah of Challah 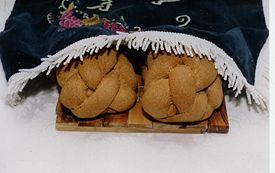 The term challah also refers to the Mitzvah of separating a portion of the dough before braiding. This portion of dough is set aside as a tithe for the Kohen.[5] In Hebrew, this Mitzvah is called "hafrashat challah."

It is customary to begin the Friday night meal and the two meals eaten during the Sabbath day with a blessing over two challot. After kiddush over a cup of wine, the head of the household recites the blessing over bread: Replace "HaShem" and "Elokeinu" with the appropriate pronunciation. "Baruch atah Adonai, eloheinu melech ha'olam, hamotzi lechem min ha'aretz" (translation: "Blessed are you, Adonai, Sovereign of the universe, who brings forth bread from the earth").

On Rosh Hashanah, the Jewish New Year, the challah may be rolled into a circular shape (sometimes referred to as a "Turban Challah"), symbolizing the cycle of the year, and baked with raisins in the dough. Sometimes the top is brushed with honey in honor of the "sweet new year."

For the Shabbat Mevarchim preceding Rosh Chodesh Iyar — i.e., the first Shabbat after the end of the Jewish holiday of Passover — there is a custom of baking schlissel challah ("key challah") as a segula (propitious sign) for parnassa (livelihood). Some make an impression of a key on top of the challah before baking; some place a key-shaped piece of dough on top of the challah before baking; and some bake an actual key inside the challah.[6]The earliest written source for this custom is the sefer Ohev Yisrael by Rabbi Avraham Yehoshua Heshel, the Apter Rav. He calls schlissel challah "an ancient custom," and also offers several kabbalistic interpretations. He also writes that after spending forty years in the desert, the Israelites continued to eat the manna until they brought the Omer offering on the second day of Passover. From that day on, they no longer ate manna, but food that had grown in the Land of Israel. Since they now had to start worrying about their sustenance rather than having it handed to them each morning, the key on the challah is a form of prayer to God to open up the gates of livelihood.[6]

Shabbat Challah rolls, known as a bilkele or bulkele or bilkel or bulkel (plural: bilkelekh; Yiddish: בילקעלע) is bread roll made with eggs, similar to a challah bun. It is often used as the bread for Shabbat meals or for meals during the Jewish holidays.

Mizrahi Jews have no tradition of using a braided loaf. Instead, the Middle Eastern Mizrahis use a flat bread resembling pita. In some traditions twelve pitta breads are used, to represent the twelve loaves of showbread in the Temple. They are arranged in two layers in the formation :••:, with the central two breads of the upper layer used for the blessing. Mizrahis of Central Asian-Bukharian descent eat a bread called leeposhka.