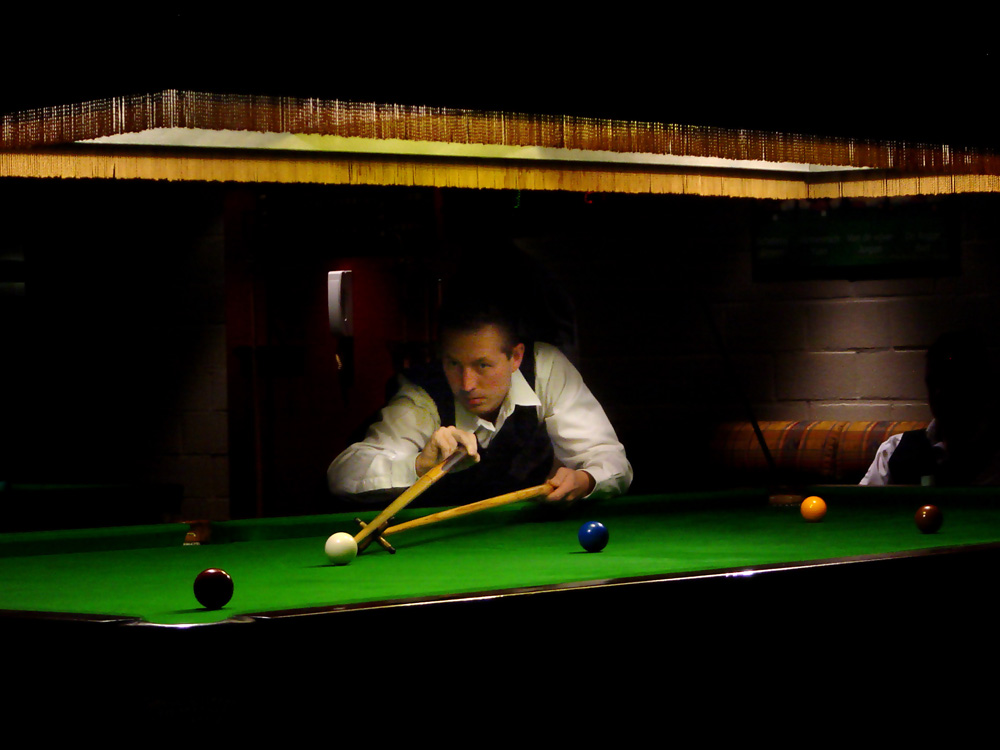 Snooker is a that is played on a large -covered table with pockets in each of the four corners and in the middle of each of the long side cushions. A regulation (full-size) table is 12 ft × 6 ft (3.6 m x 1.8 m). It is played using a cue and s: one white Cuegloss|Cue ball|cue ball, 15 Cuegloss|Red ball|red balls worth one point each, and six balls of different Cuegloss|Colour ball|colours yellow (2), green (3), brown (4), blue (5), pink (6) and black (7).

Snooker is particularly popular in many of the English-speaking and Commonwealth countries,

The game is generally regarded to have originated in the latter half of the 19th century.

The game of snooker grew in the latter half of the 19th century and the early 20th century, and by 1927 the first had been organised by who, as a professional and snooker player, moved the game from a pastime activity into a more professional sphere.

The object of the game is to score more Cuegloss|Point|points than the opponent by potting Cuegloss|Object ball|object balls in a predefined order. At the start of a frame, the balls are positioned as shown and the players take it in turns to hit a shot in a single strike from the Cuegloss|Cue tip|tip of the cue, their aim being to pot one of the red balls and score a point. If they do pot at least one red, then it remains in the pocket and they are allowed another shot - this time the aim being to pot one of the colours. If successful, then they gain the value of the colour potted. It is returned to its correct position on the table and they must try to pot another red again. This process continues until they fail to pot the desired ball, at which point their opponent comes back to the table to play the next shot. The game continues in this manner until all the reds are potted and only the 6 colours are left on the table; at that point the aim is then to pot the colours in the above order. When a colour is potted in this phase of a frame, it remains off the table. When the final ball is potted, the frame is over and the player with the most points wins it. A match where five frames would be the winner is called a "best of nine", because that would be the maximum number frames that could be played.

Points may also be scored in a game when a player's opponent Cuegloss|Foul|fouls. A foul can occur for numerous reasons, such as hitting a colour first when the player was attempting to hit a red, potting the cue ball, or failing to escape from "Cuegloss|Snooker|a snooker" (a situation where the previous player finished their turn leaving the cue ball in a position where the object ball cannot be hit directly). Points gained from a foul vary from a minimum of 4 to a maximum of 7 if the black ball is involved.

One Cuegloss|Game|game, from the balls in their starting position until the last ball is potted, is called a "frame". A Cuegloss|Match|match generally consists of a predefined number of frames and the player who wins the most frames wins the match overall. Most matches tend to consist of a relatively small number of frames, although longer matches exist to test all aspects of a player's game. The final of the World Championship, for example, is up to 35 frames in length (first to 18), and is played over two days.

Professional and competitive amateur matches are officiated by a referee who is the sole judge of fair play.

Accessories used for snooker include Cuegloss|Chalk|chalk for the tip of the cue, Cuegloss|Rest|rests of various sorts (needed often, due to the length of a full-size table), a triangle to Cuegloss|Rack|rack the reds, and a scoreboard. The principal drawback of snooker on a full-size table is the size of the room (22 ft x 16 ft)Clarifyme|date=August 2008 required to hold the large table with adequate room for cueing on all sides.

The (WPBSA, also known as World Snooker), founded in 1968 as the Professional Billiard Players' Association,

The most important event in professional snooker is the World Championship,

In an attempt to answer criticisms that televised matches can be slow or get bogged down in lengthy safety exchanges and that long matches causes problems for advertisers,

There are also other tournaments that have less importance, earn no world ranking points and are not televised. These can change on a year-to-year basis depending on calendars and sponsors. Currently the "Pontin’s International Open Series"

In the professional era that began with in the 1930s and continues up until the present day, a relatively small number of players have succeeded at the top level.

Certain players have tended to dominate the sport through the decades. is generally regarded as the principal player through the 1970s, through the 1980s and through the 1990s, winning 6, 6 and 7 World Championships respectively. In the 2000s no one has dominated, with winning the title on three occasions and and Mark Williams both winning twice.

Currently, the provisional ranking for 2008:

* , a variant with additional balls
* , a Brazilian version with only one red ball, and divergent rules