Pantone
This article is about the corporation and its color space. For other uses, see Pantone (disambiguation).

Pantone Inc. is a corporation headquartered in Carlstadt, New Jersey, USA.[1] The company is best known for its Pantone Matching System (PMS), a proprietary color space used in a variety of industries, primarily printing, though sometimes in the manufacture of colored paint, fabric, and plastics.

Pantone began as a commercial printing company in the 1950s. In 1956, they hired recent Hofstra University graduate Lawrence Herbert as a part-time employee. Herbert used his chemistry knowledge to systematize and simplify the company's stock of pigments and production of colored inks; by 1962, Herbert was running the ink and printing division at a profit, while the commercial-display division was $50,000 in debt; he subsequently purchased the company's technological assets from his employers and renamed them "Pantone".[3]

The company's primary products include the Pantone Guides, which consist of a large number of small (approximately 6×2 inches or 15×5 cm) thin cardboard sheets, printed on one side with a series of related color swatches and then bound into a small "fan deck". For instance, a particular "page" might contain a number of yellows of varying tints.

The idea behind the PMS is to allow designers to 'color match' specific colors when a design enters production stage—regardless of the equipment used to produce the color. This system has been widely adopted by graphic designers and reproduction and printing houses for a number of years now. Pantone recommends that PMS Color Guides be purchased annually as their inks become more yellow over time.[4] Color variance also occurs within editions based on the paper stock used (coated, matte or uncoated), while interedition color variance occurs when there are changes to the specific paper stock used.[5] 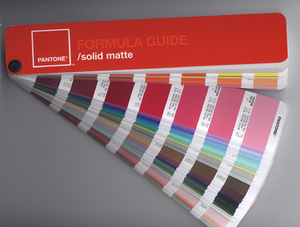 The Pantone Color Matching System is largely a standardized color reproduction system. By standardizing the colors, different manufacturers in different locations can all refer to the Pantone system to make sure colors match without direct contact with one another.

However, most of the Pantone system's 1,114 spot colors cannot be simulated with CMYK but with 13 base pigments (15 including white and black) mixed in specified amounts.[6]

The Pantone system also allows for many 'special' colors to be produced such as metallics and fluorescents. While most of the Pantone system colors are beyond the printed CMYK gamut, it was only in 2001 that Pantone began providing translations of their existing system with screen-based colors. (Screen-based colors use the RGB—red, green, blue—system to create various colors.)[7] The Goe system has RGB and LAB values with each color.[8]

Pantone colors are described by their allocated number (typically referred to as, for example, 'PMS 130'). PMS colors are almost always used in branding and have even found their way into government legislation (to describe the colors of flags). In January 2003, the Scottish Parliament debated a petition (reference PE512) to refer to the blue in the Scottish flag (saltire) as 'Pantone 300'. Countries such as Canada and South Korea and organizations such as the FIA have also chosen to refer to specific Pantone colors to use when producing flags. U.S. states including Texas have set legislated PMS colors of their flags.[9]

On September 5, 2007 Pantone introduced the Goe System.[10] Goe consists of over 2,000 new colors in a brand new matching and numbering system. In addition to the standard swatch books (now called the GoeGuide), the new system also includes adhesive-backed GoeSticks, interactive software, tools, and an online community where users are able to share color swatches and information.

The Goe system is streamlined to use fewer base colors (10 + Clear coating for reflections) and accommodates many technical challenges in reproducing colors on a press.[6]

In mid-2006 Pantone, partnering with Vermont-based Fine Paints of Europe, introduced a new line of interior and exterior paints. The color palette uses Pantone's color research and trending and has more than 3000 colors.

Color of the Year

Annually Pantone will declare a particular color "Color of the Year". The color is chosen to purportedly connect with the zeitgeist; for example the press release declaring Honeysuckle the color of 2011 said "In times of stress, we need something to lift our spirits. Honeysuckle is a captivating, stimulating color that gets the adrenaline going – perfect to ward off the blues."[11]

Pantone asserts that their lists of color numbers and pigment values are the intellectual property of Pantone and free use of the list is not allowed.[12] This is frequently held as a reason why Pantone colors cannot be supported in Open Source software such as GNU Image Manipulation Program (GIMP) and are not often found in low-cost software.[13] Pantone palettes supplied by printer manufacturers can be obtained freely, and, depending on supplier, do not come with usage restrictions beyond a sales ban on hard copies of the palette.