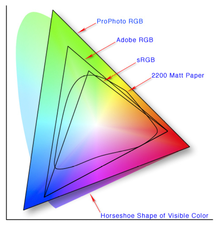 A comparison of the chromaticities enclosed by some color spaces.

A color model is an abstract mathematical model describing the way colors can be represented as tuples of numbers, typically as three or four values or color components (e.g. RGB and CMYK are color models). However, a color model with no associated mapping function to an absolute color space is a more or less arbitrary color system with no connection to any globally understood system of color interpretation.

In the most generic sense of the definition above, color spaces can be defined without the use of a color model. These spaces, such as Pantone, are in effect a given set of names or numbers which are defined by the existence of a corresponding set of physical color swatches. This article focuses on the mathematical model concept. 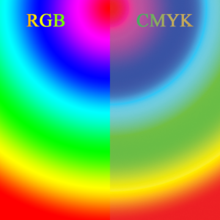 A comparison of RGB and CMYK color models. This image demonstrates the difference between how colors will look on a computer monitor (RGB) compared to how they will reproduce in a CMYK print process.

A wide range of colors can be created by the primary colors of pigment (cyan (C), magenta (M), yellow (Y), and black (K)). Those colors then define a specific color space. To create a three-dimensional representation of a color space, we can assign the amount of magenta color to the representation's X axis, the amount of cyan to its Y axis, and the amount of yellow to its Z axis. The resulting 3-D space provides a unique position for every possible color that can be created by combining those three pigments.

However, this is not the only possible color space. For instance, when colors are displayed on a computer monitor, they are usually defined in the RGB (red, green and blue) color space. This is another way of making nearly the same colors (limited by the reproduction medium, such as the phosphor (CRT) or filters and backlight (LCD)), and red, green and blue can be considered as the X, Y and Z axes. Another way of making the same colors is to use their Hue (X axis), their Saturation (Y axis), and their brightness Value (Z axis). This is called the HSV color space. Many color spaces can be represented as three-dimensional (X,Y,Z) values in this manner, but some have more, or fewer dimensions, and some, such as Pantone, cannot be represented in this way at all.

When formally defining a color space, the usual reference standard is the CIELAB or CIEXYZ color spaces, which were specifically designed to encompass all colors the average human can see.

Since "color space" is a more specific term for a certain combination of a color model plus a mapping function, the term "color space" tends to be used to also identify color models, since identifying a color space automatically identifies the associated color model. Informally, the two terms are often used interchangeably, though this is strictly incorrect. For example, although several specific color spaces are based on the RGB model, there is no such thing as the RGB color space.

Since any color space defines colors as a function of the absolute reference frame, color spaces, along with device profiling, allow reproducible representations of color, in both analogue and digital representations.

Color space conversion is the translation of the representation of a color from one basis to another. This typically occurs in the context of converting an image that is represented in one color space to another color space, the goal being to make the translated image look as similar as possible to the original.

The RGB color model is implemented in different ways, depending on the capabilities of the system used. By far the most common general-used incarnation as of 2006[update] is the 24-bit implementation, with 8 bits, or 256 discrete levels of color per channel. Any color space based on such a 24-bit RGB model is thus limited to a range of 256×256×256 ≈ 16.7 million colors. Some implementations use 16 bits per component for 48 bits total, resulting in the same gamut with a larger number of distinct colors. This is especially important when working with wide-gamut color spaces (where most of the more common colors are located relatively close together), or when a large number of digital filtering algorithms are used consecutively. The same principle applies for any color space based on the same color model, but implemented in different bit depths.

Main article: List of color spaces and their uses

CIE 1931 XYZ color space was one of the first attempts to produce a color space based on measurements of human color perception (earlier efforts were by James Clerk Maxwell, König & Dieterici, and Abney at Imperial College)[1] and it is the basis for almost all other color spaces. Derivatives of the CIE XYZ space include CIELUV, CIEUVW, and CIELAB. 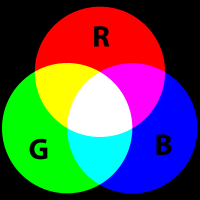 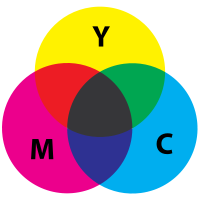 RGB uses additive color mixing, because it describes what kind of light needs to be emitted to produce a given color. Light is added together to create form from out of the darkness. RGB stores individual values for red, green and blue. RGBA is RGB with an additional channel, alpha, to indicate transparency.

Common color spaces based on the RGB model include sRGB, Adobe RGB and ProPhoto RGB.

CMYK uses subtractive color mixing used in the printing process, because it describes what kind of inks need to be applied so the light reflected from the substrate and through the inks produces a given color. One starts with a white substrate (canvas, page, etc.), and uses ink to subtract color from white to create an image. CMYK stores ink values for cyan, magenta, yellow and black. There are many CMYK color spaces for different sets of inks, substrates, and press characteristics (which change the dot gain or transfer function for each ink and thus change the appearance).

YIQ was formerly used in NTSC (North America, Japan and elsewhere) television broadcasts for historical reasons. This system stores a luminance value with two chrominance values, corresponding approximately to the amounts of blue and red in the color. It is similar to the YUV scheme used in most video capture systems[2] and in PAL (Australia, Europe, except France, which uses SECAM) television, except that the YIQ color space is rotated 33° with respect to the YUV color space. The YDbDr scheme used by SECAM television is rotated in another way.

YPbPr is a scaled version of YUV. It is most commonly seen in its digital form, YCbCr, used widely in video and image compression schemes such as MPEG and JPEG.

xvYCC is a new international digital video color space standard published by the IEC (IEC 61966-2-4). It is based on the ITU BT.601 and BT.709 standards but extends the gamut beyond the R/G/B primaries specified in those standards.

HSV (hue, saturation, value), also known as HSB (hue, saturation, brightness) is often used by artists because it is often more natural to think about a color in terms of hue and saturation than in terms of additive or subtractive color components. HSV is a transformation of an RGB colorspace, and its components and colorimetry are relative to the RGB colorspace from which it was derived.

Early color spaces had two components. They largely ignored blue light because the added complexity of a 3-component process provided only a marginal increase in fidelity when compared to the jump from monochrome to 2-component color.