Photography and the law

Photography and the law

A "No Photography" sign, commonly placed in properties where the owner objects to or it is illegal to take photographs (though in some jurisdictions, this is not a legal requirement).

Canadian police have no legal authority to stop people from taking photos in a public area, and they have no authority to demand that the photographer delete photos already taken.[1]

In general under the law of the United Kingdom one cannot prevent photography of private property from a public place, and in general the right to take photographs on private land upon which permission has been obtained is similarly unrestricted. However a landowner is permitted to impose any conditions they wish upon entry to a property, such as forbidding or restricting photography. Two public locations in the UK, Trafalgar Square and Parliament Square have a specific provision against photography for commercial purposes without the written permission of the Mayor,[2] and permission is needed to photograph or film for commercial purposes in the Royal Parks.[3]

Persistent or aggressive photography of a single individual may come under the legal definition of harassment.[4]

It is a criminal offence (contempt) to take a photograph in any court of any person, being a judge of the court or a juror or a witness in or a party to any proceedings before the court, whether civil or criminal, or to publish such a photograph. This includes photographs taken in a court building, or the precincts of the court.[5] Taking a photograph in a court can be seen as a serious offence, leading to a prison sentence.[6][7] The prohibition on taking photographs in the precincts is vague. It was designed to prevent the undermining of the dignity of the court, through the exploitation of images in low brow 'picture papers'.[8]

Following a prolonged campaign, including a series of demonstrations by photographers abused by Police Officers and PCSOs, the Metropolitan Police was forced to issue updated legal advice which now confirms that 'Members of the public and the media do not need a permit to film or photograph in public places and police have no power to stop them filming or photographing incidents or police personnel' and that 'The power to stop and search someone under Section 44 of the Terrorism Act 2000 no longer exists.'[10]

It is also an offence under section 58 of the Terrorism Act 2000 to take a photograph of a kind likely to be useful to a person committing or preparing an act of terrorism, or possessing such a photograph. There is an identical defence of reasonable excuse. This offence (and possibly, but not necessarily the s.58A offence) covers only a photograph as described in s.2(3)(b) of the Terrorism Act 2006. As such, it must be of a kind likely to provide practical assistance to a person committing or preparing an act of terrorism. Whether the photograph in question is such is a matter for a jury, which is not required to look at the surrounding circumstances. The photograph must contain information of such a nature as to raise a reasonable suspicion that it was intended to be used to assist in the preparation or commission of an act of terrorism. It must call for an explanation. A photograph which is innocuous on its face will not fall foul of the provision if the prosecution adduces evidence that it was intended to be used for the purpose of committing or preparing a terrorist act. The defence may prove a reasonable excuse simply by showing that the photograph is possessed for a purpose other than to assist in the commission or preparation of an act of terrorism, even if the purpose of possession is otherwise unlawful.[11]

Copyright can subsist in an original photograph, i.e. a recording of light or other radiation on any medium on which an image is produced or from which an image by any means be produced, and which is not part of a film.[12] Whilst photographs are classified as artistic works, the subsistence of copyright does not depend on artistic merit.[12] The owner of the copyright in the photograph is the photographer – the person who creates it,[13] by default.[14] However, where a photograph is taken by an employee in the course of employment, the first owner of the copyright is the employer, unless there is an agreement to the contrary.[15]

Copyright in a photograph lasts for 70 years from the end of the year in which the photographer dies.[16] A consequence of this lengthy period of existence of the copyright is that many family photographs which have no market value, but significant emotional value, remain subject to copyright, even when the original photographer cannot be traced, has given up photography, or died (a problem known as copyright orphan). In the absence of a licence, it will be an infringement of copyright in the photographs to copy them.[17] As such, scanning old family photographs to a digital file for personal use is prima facie an infringement of copyright.

Certain photographs may not be protected by copyright. Section 171(3) of the Copyright, Designs and Patents Act 1988 gives courts jurisdiction to refrain from enforcing the copyright which subsists in works on the grounds of public interest. For example, patent diagrams are held to be in the public domain, and are thus not subject to copyright. 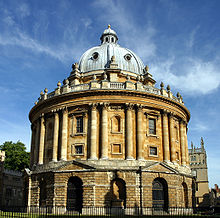 The Radcliffe Camera, built 1737–1749, holds books from the Bodleian Library. Example of a building out of copyright.

However, the subject matter of a photograph is not necessarily subject to an independent copyright. For example, in the Creation Records case,[20][21] a photographer, attempting to create a photograph for an album cover, set up an elaborate and artificial scene. A photographer from a newspaper covertly photographed the scene and published it in the newspaper. The court held that the newspaper photographer did not infringe the official photographer's copyright. Copyright did not subsist in the scene itself – it was too temporary to be a collage, and could not be categorised as any other form of artistic work.

It is possible to say with a high degree of confidence that photographs of three-dimensional objects, including artistic works, will be treated by a court as themselves original artistic works, and as such, will be subject to copyright.[25] It is likely that a photograph (including a scan – digital scanning counts as photography for the purposes of the Copyright Designs and Patents Act 1988) of a two dimensional artistic work, such as another photograph or a painting will also be subject to copyright if a significant amount of skill, labour and judgment went into its creation.[26] 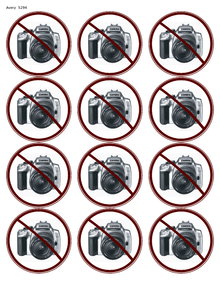 "No photographs" sticker. Designed for persons at conferences who do not want any digital likeness of them taken, including video, photography, audio, etc.

A right to privacy exists in the UK law, as a consequence of the incorporation of the European Convention on Human Rights into domestic law through the Human Rights Act 1998. This can result in restrictions on the publication of photography.[27][28][29][30][31]

Whether this right is caused by horizontal effect of the Human Rights Act 1998 or is judicially created is a matter of some controversy.[32] The right to privacy is protected by Article 8 of the convention. In the context of photography, it stands at odds to the Article 10 right of freedom of expression. As such, courts will consider the public interest in balancing the rights through the legal test of proportionality.[29]

A very limited statutory right to privacy exists in the Copyright Designs and Patents Act 1988. This right is held, for example, by someone who hires a photographer to photograph their wedding. The commissioner,[33] irrespective of any copyright which he does or does not hold in the photograph[33] of a photograph which was commissioned for private and domestic purposes, where copyright subsists in the photograph, has the right not to have copies of the work issued to the public,[34] the work exhibited in public[35] or the work communicated to the public.[36] However, this right will not be infringed if the rightholder gives permission. It will not be infringed if the photograph is incidentally included in an artistic work, film, or broadcast.[37]

Local, state, and national laws may exist pertaining to photographing or videotaping. Laws that are present may vary from one jurisdiction to the next, and may be stricter in some places and more lenient in others, so it is important to know the laws present in one's location. Typical laws in the United States are as follows:

Reactions to photography differ between societies, and even where restrictions on photography are not covered by statute, code, or judicial precedent, there may be resistance to the taking of photographs by individuals or groups. The breach of the social norms can result in opprobrium, coercion, danger, and violence, and as such should be noted and respected.

Travelers who wish to take any photographs must obtain a photography permit from the Government of Sudan, Ministry of Interior, Department of Aliens.[49]

A permit is required for aerial photography in India, which normally takes over a month to acquire.[50] Regulations apply to land-based photography for certain locations.[50]

Working as a photographer or calling oneself a photographer requires a masters degree in photography from the Reykjavík Technical College, or a similar degree from another industry-based school in Iceland.[51][citation needed]