For other uses, see Aperture (disambiguation).

f stops demonstrated on a lens 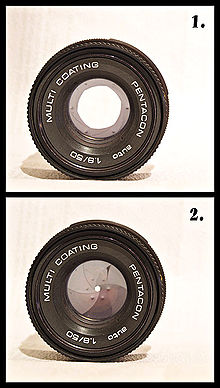 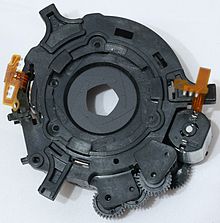 Definitions of Aperture in the 1707 Glossographia Anglicana Nova[1]

An optical system typically has many openings, or structures that limit the ray bundles (ray bundles are also known as pencils of light). These structures may be the edge of a lens or mirror, or a ring or other fixture that holds an optical element in place, or may be a special element such as a diaphragm placed in the optical path to limit the light admitted by the system. In general, these structures are called stops, and the aperture stop is the stop that determines the ray cone angle, or equivalently the brightness, at an image point.

Sometimes stops and diaphragms are called apertures, even when they are not the aperture stop of the system.

The word aperture is also used in other contexts to indicate a system which blocks off light outside a certain region. In astronomy for example, a photometric aperture around a star usually corresponds to a circular window around the image of a star within which the light intensity is summed.[2]

A device called a diaphragm usually serves as the aperture stop, and controls the aperture. The diaphragm functions much like the iris of the eye – it controls the effective diameter of the lens opening. Reducing the aperture size increases the depth of field, which describes the extent to which subject matter lying closer than or farther from the actual plane of focus appears to be in focus. In general, the smaller the aperture (the larger the number), the greater the distance from the plane of focus the subject matter may be while still appearing in focus.

The lens aperture is usually specified as an f-number, the ratio of focal length to effective aperture diameter. A lens typically has a set of marked "f-stops" that the f-number can be set to. A lower f-number denotes a greater aperture opening which allows more light to reach the film or image sensor. The photography term "one f-stop" refers to a factor of √2 (approx. 1.41) change in f-number, which in turn corresponds to a factor of 2 change in light intensity.

Aperture priority is a semi-automatic shooting mode used in cameras. It allows the photographer to choose an aperture setting and allow the camera to decide the shutter speed and sometimes ISO sensitivity for the correct exposure. This is sometimes referred to as Aperture Priority Auto Exposure, A mode, Av mode, or semi-auto mode.[3]

The amount of light captured by a lens is proportional to the area of the aperture, equal to:

Where f is focal length and N is the f-number.

The focal length value is not required when comparing two lenses of the same focal length; a value of 1 can be used instead, and the other factors can be dropped as well, leaving area proportion to the reciprocal square of the f-number N.

If two cameras of different format sizes and focal lengths have the same angle of view, and the same aperture area, they gather the same amount of light from the scene. The relative focal-plane illuminance, however, depends only on the f-number N, independent of the focal length, so is less in the camera with the larger format, longer focal length, and higher f-number. This assumes both lenses have identical transmissivity.

Most SLR cameras provide automatic aperture control, which allows viewing and metering at the lens’s maximum aperture, stops the lens down to the working aperture during exposure, and returns the lens to maximum aperture after exposure.[5]

The first SLR cameras with internal (“through-the-lens” or “TTL”) meters (e.g., the Pentax Spotmatic) required that the lens be stopped down to the working aperture when taking a meter reading. With a small aperture, this darkened the viewfinder, making viewing and composition difficult.[6] Subsequent models soon incorporated mechanical coupling between the lens and the camera body, indicating the working aperture to the camera while allowing the lens to be at its maximum aperture for composition and focusing;[5] this feature became known as automatic aperture control or automatic diaphragm control.

In scanning or sampling

The terms scanning aperture and sampling aperture are often used to refer to the opening through which an image is sampled, or scanned, for example in a Drum scanner, an image sensor, or a television pickup apparatus. The sampling aperture can be a literal optical aperture, that is, a small opening in space, or it can be a time-domain aperture for sampling a signal waveform.

For example, film grain is quantified as graininess via a measurement of film density fluctuations as seen through a 0.048 mm sampling aperture.