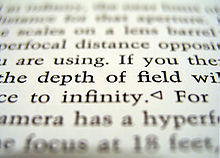 An image that is partially in focus, but mostly out of focus in varying degrees.

In geometrical optics, a focus, also called an image point, is the point where light rays originating from a point on the object converge.[1] Although the focus is conceptually a point, physically the focus has a spatial extent, called the blur circle. This non-ideal focusing may be caused by aberrations of the imaging optics. In the absence of significant aberrations, the smallest possible blur circle is the Airy disc, which is caused by diffraction from the optical system's aperture. Aberrations tend to get worse as the aperture diameter increases, while the Airy circle is smallest for large apertures.

An image, or image point or region, is in focus if light from object points is converged almost as much as possible in the image, and out of focus if light is not well converged. The border between these is sometimes defined using a circle of confusion criterion.

A principal focus or focal point is a special focus: 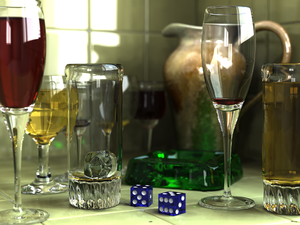 Focal blur is simulated in this computer generated image of glasses, which was rendered in POV-Ray.